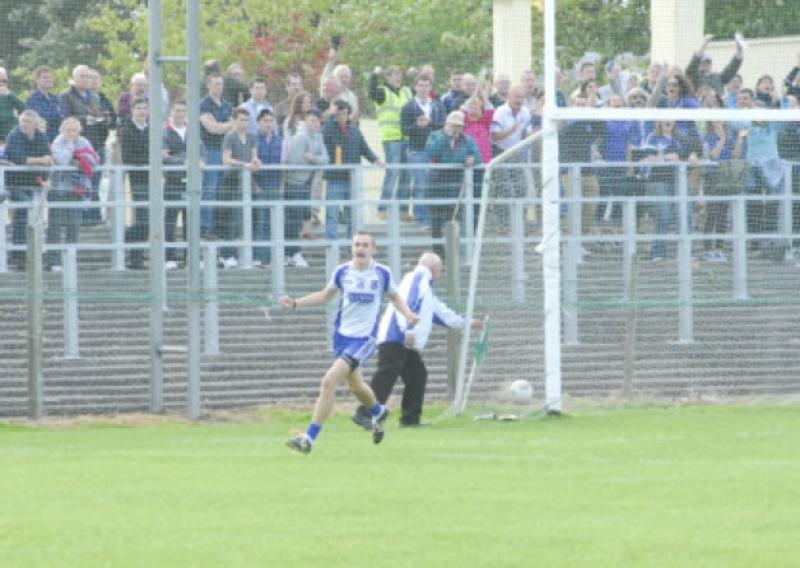 Only for a succession of misses over the course of the hour, the Carrick based team would have been out of sight as their expected dominance of the midfield area translated into mastery in most sectors of the field.

St. Mary’s dominated this contest but it wasn’t until the final quarter that they scored the two goals that reflected their superiority in every area of the field except the score-board.

Man of the Match Clement Cunniffe typified St. Mary’s display as his fielding was immense, his work-rate was exemplary and his mastery of the simple tasks saw him stand-out among a plethora of outstanding displays for the winners.

Conor Farrell pushed Cunniffe close for the award, a commanding display at centre-back that must surely have caught the eye of the watching Sean Hagan while Conor McWeeney recaptured the form of his Minor years with a great display in the centre of the park alongside the impressive Daniel Lowe.

Mary’s mastery of the midfield meant their defence was on the front foot at all times and James Glancy played a captain’s role in negating the influence of the dangerous John Mulligan.

Mohill, to their credi, never lay down and they fought right to the final whistle with Ronan Kennedy’s goal and a Ronan Gallagher point that should have beeen a goal lending a slight gloss to the scoreline.

An injury to Gallagher in the first couple of minutes obivoulsy hit Mohill’s hopes as they needed Gallagher at his very best to cope with St. Mary’s dominance in the middle of the field.

St. Mary’s also countered the movement and pace that Mohill possess with an immense work-rate and the amount of turnovers was staggering as St. Mary’s hard running saw them force turn-overs or intercept time and time again.

The only blot on the St. Mary’s copy-book was their lack of accuracy, a strange statement considering they scored 2-13 but the first five minutes of the second half was typficial of their day as they kick four bad wides before converting a free.

St. Mary’s now have a break before their Connacht Championship campaign in November against the Sligo or Roscommon champions but they meet Mohill again next Friday evening in the Junior A Final as they seek to complete a double.

St. Mary’s open the scoring when good pressure forces a turnover and Micheal McWeeney scores on three minutes with Robbie Lowe scoring a huge point a minute later from the left corner after holding off Micheal McGuinness.

Alan Doherty drove a great point over the bar from the wing a minute later to put St. Mary’s three clear but Shane Quinn steadied Mohill when he pointed from 35 yards to open their account.

Padraig Tighe edged Mohill closer with an eighth minute free but St. Mary’s continued to dominate but had two unlucky wides from Alan Doherty, both narrowly missing the target and Mohill tied the scores on 16 minutes when Colm Beirne converted a free after a foul on Ronan Gallagher.

Alan McLoughlin hit Mohill’s first wide on 17 minutes with Micheal McWeeney notching his second from distance after a fine ball into space but Domhnaill Flynn stepped inside his marker to point on 22 minutes.

Robbie Lowe put over two frees to edge St. Mary’s clear and the Carrick men struck impressively in the last seconds with Brian O’Donnell sending a high effort curling over the bar before, just into added time, Ray Mulvey burst through the cover but saw his shot go over the bar rather than under it as he was threatening to.

That left St. Mary’s with a commanding 0-8 to 0-4 halftime lead and they really should have extended the lead substantially in the early minutes of the second half with four wides from Jack De Lacy, Ray Mulvey, Robbie Lowe and Nicholas McWeeney before Robbie Lowe curled a free over the bar from 40 yards on four minutes.

Second later, Conor Farrell drove a shot over the bar rather than under it that he could have and Alan Doherty tapped over a free before Mohill gave themselves a lifeline when Alan Armstrong drove through the centre and found Alan McLoughlin who drove a shot at the far corner, the ball hitting the post before rebounding into the net on eight minutes.

A minute later, Mohill looked as if they could have had another goal only for Jonathan Cassidy to block Padraig Tighe’s shot, Alan McLoughlin putting over a free for a handling offence on the ground.

The gap was down to two after Shane Quinn took a pass from Ronan Gallagher to point but St. Mary’s first score in ten minutes was a massive score when Robbie Lowe’s free dipped sharply, bounced off the keeper and Alan Doherty dived in to punch the ball to the Mohill net to open up a five point gap.

St. Mary’s should have killed off the game in the following minutes but had a few wides before sub Colm O’Reilly got a huge point and the victory was sealed when O’Reilly sent a long ball to Brian O’Donnell who brilliantly flicked the ball over the advancing defenders to Micheal McWeneey who rounded the keeper to fire the ball to the net.

Subs Joe O’Rourke and Colm O’Reilly both added points but a lack of cncentration almost let Mohil back into the game as Ronan Kennedy drove the ball to the net from close range after being set up by Ronan Gallagher and Gallagher himself had a great goal chance but drove his shot over the bar.

Fittingly, St. Mary’s had the last score with sub Niall Comerton tapping over a late free to seal the win.