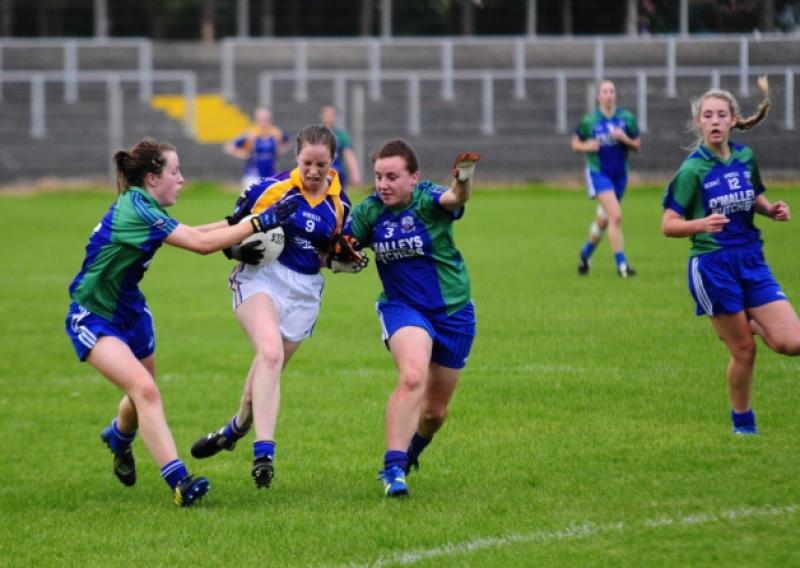 The 2013 Leitrim Ladies Senior Football Final will be contested again in two weeks time after both St Joseph’s and Aughawillan played out a thrilling draw at Páirc Seán Mac Diarmada onSaturday evening.

The 2013 Leitrim Ladies Senior Football Final will be contested again in two weeks time after both St Joseph’s and Aughawillan played out a thrilling draw at Páirc Seán Mac Diarmada onSaturday evening.

Despite being dominated for the majority of the opening half, Aughawillan did just enough to keep in touch with the reigning county champions at half-time and showed tremendous fighting spirit to claw themselves back into the game courtesy of two second half goals from Carla Le Guen and Grainne McGlade.

The Aughavas/Carrigallen based side could have broken Aughawillan hearts four minutes into injury time at the end of the game when, with scores level, corner forward Michelle Heslin opted to strike for goal instead of taking what would have been a match-winning point.

Seamus Mullen’s side had their goalkeeper Shauna Plunkett to thank as she pushed away Helsin’s last gasp effort.

Just who will feel better about the draw is hard to guess - St. Joseph’s dominated the first half but must have been relieved to fight back to gain a draw, although they will wonder if those missed late chances could come back to haunt them.

Martin Dolan’s Joseph’s side captured an early three point lead as they camped in the Aughawillan half during the opening exchanges.

Two points from two Bronagh O’Rourke frees and a well taken Deirde Moran score put daylight between the sides after six minutes. Aughawillan’s full forward Aileen Maguire closed the gap to two when she sent over her free from close range on eight minutes.

Two white flags each from Aine Heslin and O’Rourke stretched Joseph’s lead to six before Josephine Maguire and Aileen Maguire each sent the ball between the Aughawillan posts on 25 and 28 minutes respectively.

Le Guen struck the Joseph’s post two minutes into injury time at the end of the first half, just moments before star forward Catherine Dolan claimed her only point of the contest to leave Joseph’s five points clear the break on a scoreline of 0-8 to 0-3.

Joseph’s withdrew midfielder Ciara Gray at half-time ahead of this Sunday’s All-Ireland Ladies Final in which the 31-year-old will feature for Cavan against Tipperary.

The Aughavas/Carrigallen side came to rue this decision as although O’Rourke replied to Aileen Maguire’s third score of the contest, further points from Maguire and Le Guen left three between the sides at 0-9 to 0-6 before Grainne McGlade leveled the game on 42 minutes.

Having weaved in and out through several Joseph’s challenges, McGlade, who is also part of the Cavan panel for this weekend’s national decider, sent the ball low, hard and beyond the reach of the helpless Shannon O’Rourke in the St Joseph’s goal.

The county champions regained their lead on 44 minutes courtesy of a Michelle Heslin point after some good interplay between the corner forward and Deirde Moran.

St. Joseph’s reintroduced Ciara Gray to the fray on 47 minutes but that move could do little to stop Le Guen putting Aughawillan into the lead for the first time on the 50 minute mark. Siobhan McCartin failed to deal with a punt forward from the Aughawillan midfield and Le Guen stole in and did the honours as she calmly slotted past O’Rourke to send Seamus Mullen’s ladies into a two point lead.

This heralded a breathtaking finish as both teams went on the offensive. Another Carla Le Guen point but three between the teams with six minutes remaining before both O’Rourke struck twice along with a 61st minute Michelle Heslin point to level the game at 0-13 to 2-7 in injury time.

Then came the fourth minute of time added on and the moment that could have won the game. Having been teed up by Aine Heslin with the game level and with an expectant crowd rising to their feet, Michelle Heslin struck for goal from ten yards out only to be denied by the bravery of Aughawillan net-minder Plunkett who parried the ball away to safety.

Indeed, Joseph’s had one last chance only seconds later when a Deirdre Moran free from 30 yards was caught by a gust of wind as the ball failed to reach its intended target between Plunkett’s posts.

The replay will take place on Saturday October 5, with a time and venue yet to be decided.