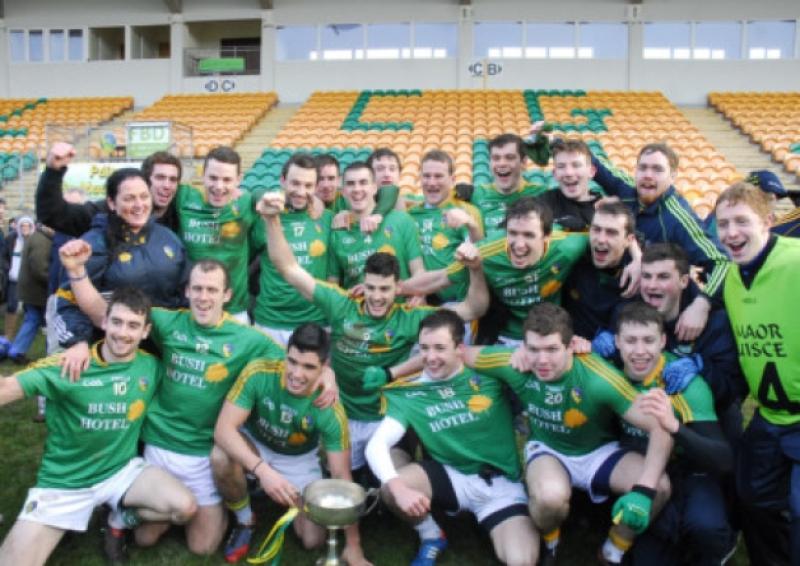 After a wait of 19 years for silverware was ended last year, the Leitrim supporters were smiling once again when they retained the FBD title last Sunday.

After a wait of 19 years for silverware was ended last year, the Leitrim supporters were smiling once again when they retained the FBD title last Sunday.

On a horrible day weather wise the disappointments of last year were firmly put to bed as the home supporters, whose last visit to Pairc Sean was the humiliating defeat at the hands of Armagh, were able to celebrate a rare victory over their nearest rivals.

With the wind swirling around the pitch to such an extent that the players were struggling to hear one another and driving rain making conditions very difficult for both sets of players.

Despite playing into that wind in the opening half, it was Leitrim who looked the more composed as they utilised a blanket defence to great effect and when they were in possession they were composed and clinical.

The wind meant Emlyn Mulligan’s shooting wasn’t as accurate as would normally be the case but his array of passing was exceptional, particularly when finding the runs of Ray Cox, who was often the only man he had to aim for in an advanced position.

On a day when it was difficult to fault any of the Leitrim players, two players new to the county scene this year, Aaron Hickey and Damian Moran impressed in midfield and when the going got tough in the second they were assisted at times by Tomas Beirne who began the game at full-forward.

Kevin Conlan has been operating in a deeper role this year and last Sunday he was again crucial to Leitrim’s cause as he won a lot of ‘dirty ball’ and helped to create attacks for his side.

The key to Leitrim’s victory was undoubtedly the half-back line where Paul Brennan, Wayne McKeon and Gary Reynolds laid the platform for victory. Even when the team suffered the blow of losing Paul Brennan to a 22nd minute black card, the introduction of Danny Beck and his subsequent performance helped to minimise the significance of that loss.

For the second successive year Wayne McKeon left the pitch after an FBD Final with a piece of crystal under his arm and it could not be denied he deserved his man of the match award.

His tireless running in the opening half resulted in him scoring two points as Leitrim took the game to their opponents from the opening whistle.

It was McKeon who was responsible for the game’s opening score when he burst through the Roscommon defence before being fouled and the subsequent free was converted by Emlyn Mulligan.

It was to get even better for Leitrim in the sixth minute when they struck for the game’s opening goal.

Emlyn Mulligan’s excellent pass released Ray Cox who then saw his shot kept out by a fine save from Darren O’Malley. Fortunately for Leitrim, Aaron Hickey was on hand to force the ball to the net.

The Roscommon forwards were struggling to get the better of Leitrim’s well-marshalled defence although Cathal McCrann did make an excellent save to deny Craig Burns.

The game was 13 minutes old before they registered their first score when Niall Daly pointed but Leitrim replied with a Wayne McKeon point after good play from Fergal Clancy.

Incredibly the game was 26 minutes old before Roscommon scored their second point of the game with Conor Daly on target and two minutes later the deficit was further reduced when another defender, Niall Carty, pointed but it was Leitrim who completed the first half scoring with another fine Wayne McKeon point to give Leitrim a 1-3 to 0-3 lead.

Roscommon began brightly after the interval and brothers Diarmuid (free) and Ciaran Murtagh pointed to leave just the minimum between the sides.

Leitrim showed no signs of panic and they responded with points of real quality from Fergal Clancy and Ray Cox.

The impressive Diarmuid Murtagh replied with another Roscommon point but Leitrim were still looking dangerous when they attacked and they duly found the net for second time with eight minutes remaining.

Emlyn Mulligan picked out Tomas Beirne who in turn found John Mulligan who showed great composure to score from close range on his senior debut.

As the game edged close to full-time some Roscommon supporters were seen making there way home but Roscommon refused to accept defeat without a fight.

With the 60 minutes practically expired Conor Daly found Niall Daly who struck an unstoppable shot past Cathal McCrann and a minute later Cathal Cregg converted a free to leave just a point between the sides and that is how the game finished.

The excitement in Pairc Sean was palpable and the cheer that greeted the full-time whistle was an indication of what the win meant.