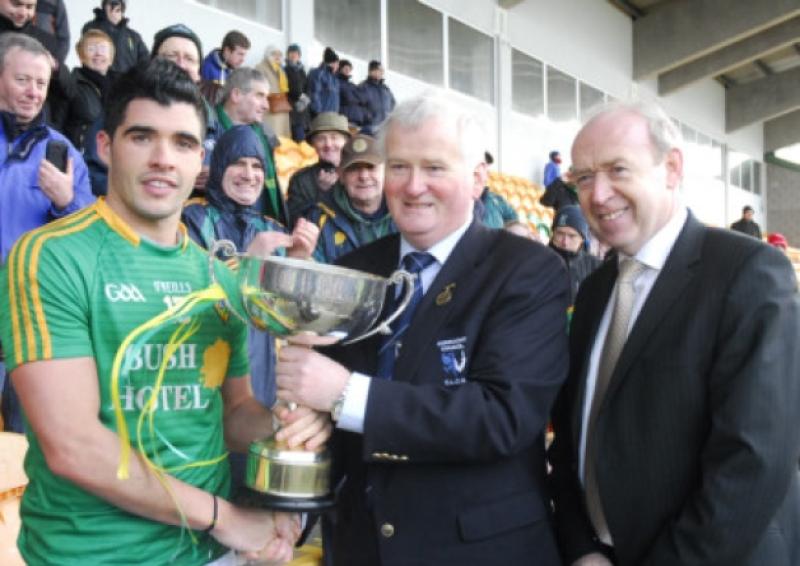 After back to back FBD titles for the first time there was a real sense of positivity in Carrick on Sunday, emphasised by captain Emlyn Mulligan.

After back to back FBD titles for the first time there was a real sense of positivity in Carrick on Sunday, emphasised by captain Emlyn Mulligan.

“You saw how much it meant to the supporters and the players. It’s not often you get one over on your local neighbours. There is that little bit of rivalry and I suppose looking ahead to game against them in the championship.”

Emlyn is normally noted as the man whose scoring contributions are crucial but with the weather conditions proving particularly difficult it was, by his own admission, not his best day in terms of shooting.

“It wasn’t one of my better performances shooting wise but there are days like that, it just doesn’t happen for you and you just have to get the head down and work.”

In terms of shooting he was harsh on himself but he played a key role with a series of wonderful passes and was instrumental in both Leitrim goals.

“My job is to take frees but during open play I try to work as much as I can. Myself and Ray (Cox) work well enough in there and he makes good runs for me. Anything that I can bring to the team, that’s my part of it, if I score the team scores or if Ray Cox scores, the team scores.”

While stressing the importance of the collective team effort rather than individual displays, Emlyn couldn’t help but single out man of the match Wayne McKeon for praise.

“I don’t like singling out boys but Wayne McKeon had an absolutely phenomenal first half, breaking through tackles and Paul Brennan along with him.

“Unfortunately Paul got the black card but the two boys were at times phenomenal. We have the power and strength and we used it to our ability.”

After the turmoil of last year Emlyn was pleased to begin the new year on such a positive note saying, “We have a good group of lads there, new fellas and boys back from injury and different reasons. We have a clean slate for 2014 and hopefully we can push on and hopefully its a successful one.”

As the first Leitrim captain to lift senior silverware on separate occasions Emlyn Mulligan was understandably a proud man but his attention quickly turned to the next challenge.

On a day in which both ‘Leitrim GAA’ and ‘Emlyn Mulligan’ were trending on Twitter, Emlyn said, “It’s a great feeling after a victory and it’s been great all January but I don’t want to be sitting in that dressing room next week after being beaten and looking at a long haul in Division 4 without any success.”

Despite the awful weather there was a bumper crowd in Pairc Sean MacDiarmada and Emlyn is hoping the supporters can turn out in force again this Sunday for the visit of Antrim.

“It makes a huge difference to us when you hear the crowd roar when you get a score, it’s a massive boost for the boys.

“As I keep saying I just hope we get a big crowd here next Sunday.”