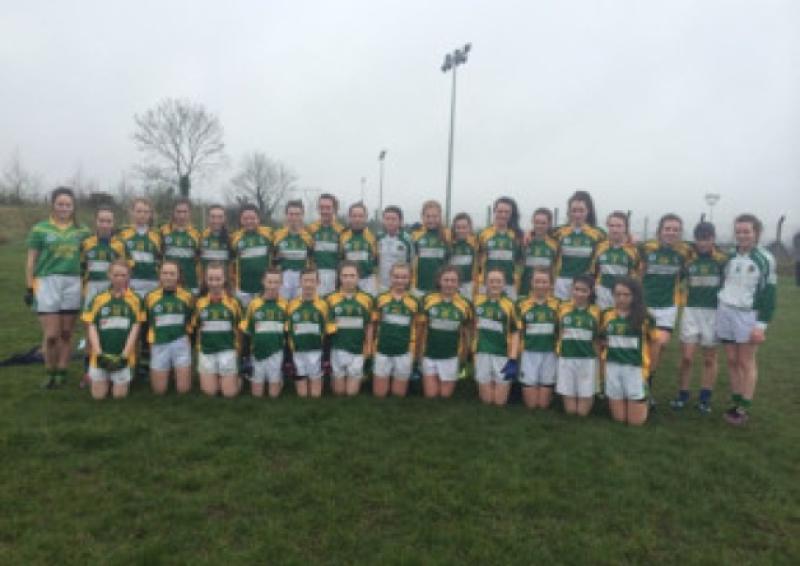 Leitrim secured their place in the ladies Division 3 semi-finals with a win over Tipperary and will now play Waterford for a place in the decider.

Leitrim secured their place in the ladies Division 3 semi-finals with a win over Tipperary and will now play Waterford for a place in the decider.

Last Sunday’s game in Ballinamore saw both teams have to contend with a strong breeze that made life difficult for both sets of forwards and Leitrim also had to contend with losing to members of their full-back line, Mary Farrell and Sharon Kerrigan to yellow cards.

Lorraine Brennan and Sarah McLoughlin were both to the fore and Leitrim deservedly opened the scoring when Aine Tighe pointed in the opening minute.

An excellent team score followed with Michelle and Aine Heslin combining with Anna Conlan before Sarah McLoughlin pointed to give Leitrim an early cushion.

The green flag was raised for the first time in the ninth minute when Sarah McLoughlin, Aine and Michelle Heslin linked up to breach the Tipperary defence and when the ball was played to Aine Tighe, she beat a defender before dispatching her shot to the goal.

Leitrim looked dominant but were dealt a blow when Mary Farrell, was sent to the sideline for 10 minutes after being shown a yellow card and slowly Tipperary began their fight back.

An excellent individual goal from their standout performer, Lorraine O’Shea brought Tipperary back into contention but Leitrim steadied the ship when Aine Tighe converted a free.

Edith Carroll replied with a pointed free but Leitrim finished the half strongly with a Roisin Fowley point after an excellent interception from Sarah McLoughlin meaning Leitrim led 1-4 to 1-1 at the break.

Points from Deirdre Ward and Michelle Heslin within 10 minutes of the restart gave Leitrim a bit of breathing room but they were unable to open the kind of lead that would make them feel comfortable.

Michelle Heslin further extended the Leitrim lead before Tipperary hit back with points from Mairead Morrissey but Leitrim replied quickly with an Aine Tighe free.

Even though Leitrim were again reduced to 14 when Sharon Kerrigan was issued with a yellow card they were still in control although they did have Michelle Guckian to thank when she made a fine save to deny Claire Mullins.

The deficit was reduced to two points when Claire Carroll and Mairead Morrissey (free) pointed but Leitrim were to have the final say and victory was secured when Roisin Fowley scored the afternoon’s final point.

• In other Ladies football action, Leitrim U14s started their Connacht Championship campaign with a 3-9 to 2-6 victory over Sligo in Annaduff last Saturday.

A Derbhal Rooney goal after two minutes got Leitrim off to a great start as Aoife Gilmartin Megan O’Rourke both found the net in the first half to go with points from Ciara Reynolds, O’Rourke, Niamh Donegan & Rooney as Leitrim led 3-7 to 1-4 at the break.

Sligo came into the game far more in the second half but with a strong midfield and defence holding firm, Leitrim were never truly in an real trouble of being caught.