Jury still out on fascinating Final but St. Mary’s have an edge 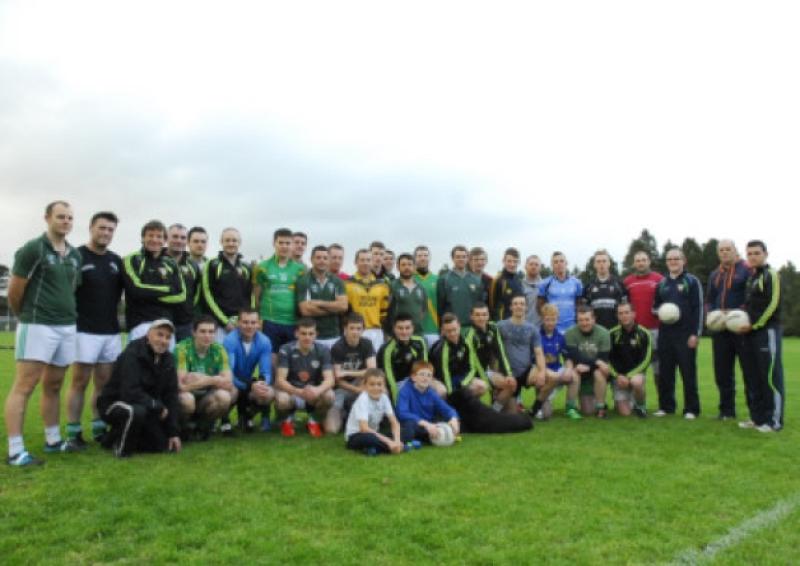 Two days to go to the biggest day in the Leitrim club calendar and for many, the jury is still out on who emerge victorious in Sunday’s Connacht Gold Leitrim Senior Championship Final.

Two days to go to the biggest day in the Leitrim club calendar and for many, the jury is still out on who emerge victorious in Sunday’s Connacht Gold Leitrim Senior Championship Final.

Pairc Sean Mac Diarmada hosts an intriguing Final between two teams who combine a potent mix of athleticism, speed and power as Mohill and St. Mary’s Kiltoghert meet in a repeat of the famous 2006 County Final in Cloone.

Mohill’s first title since 1971 came against the odds seven years ago as St. Mary’s led by five points with 12 minutes to go but a Shane Canning inspired Mohill scored six unanswered points to snatch a famous win.

That final still attracts puzzled comment to this day - St. Mary’s supporters still wonder at the decision to take off James Glancy and Brendan Guckian, a move that liberated Michael McGuinness and gave Canning the room to wreak havoc on the Carrick men.

Equally puzzling was the failure of Mohill to build on that success - the likes of Ronan Gallagher, Ronan Kennedy, Stephen Conaty and Colm Beirne was all in their late teens or early 20s and they had an experienced backbone but until this year, they have never looked like getting near a County Final again let alone winning a title.

That has changed this year as a young Mohill team have seen off tough challenges from a powerful Glencar/Manorhamilton and Gortletteragh and drew with Melvin Gaels in the knock-out stages and now carry an element of expectation and excitement.

All of Mohill is gearing up for the big day and is full of nervous anticipation which helps with the psyching up for the Final but may add a little to the pressure of the occasion.

St. Mary’s, on the other hand, are something of an institution - quite a change for a team that won just two County titles (1958 and 1995) prior to the new Millennium. But since 2003, decades of underachievement have been turned into consistent excellence and there is almost a feeling that if you beat St. Mary’s, you win the County title.

That was certainly the case for Glencar/Manor in three of their four triumphs, Annaduff and Kiltubrid and their record of six final appearances in 11 attempts volumes for their standing in the county.

On first glance, Sunday’s comes down to the physical power and experience of a St. Mary’s side against the vibrant youth and pace of Mohill but Sunday’s Final can’t simply be button-holed so easily.

Most neutrals point to St. Mary’s physical strength and experience of the likes of Daniel Lowe, Clement Cunniffe and Jimmy Guckian but it is easy to forget just how rejuvenated the Carrick men have been thanks to addition of youngsters Conor Farrell, Jack De Lacy, Joe O’Rourke & Conor McWeeney.

Mohill are simply not young lads tearing around the place even if Shane Quinn, John Mulligan, Alan McLoughlin, Eanna Madden or Caillin Canning often seem like Usain Bolt - there is a rich seam of experience and physical power present in the Mohill line-up to rival what St. Mary’s possess.

Ronan Gallagher’s strength in the middle of the park, the experience of Michael McGuinness and Ciaran Kennedy in defence and the know-how of John McGuinness, Padraig Tighe, Colm Beirne and super-sub Ronan Kennedy has been over-looked by many, Kennedy in particular can light up any game.

But while both teams are more alike than you would first think, there is also more than a grain of truth in the simple images of both teams.

St. Mary’s immense physical power in the middle of the field has been their bed-rock this year and Mohill will have to counter the influence of Lowe, Cunniffe, Guckian, McWeeney and Farrell.

And Mary’s will have to counter the speed of Shane Quinn’s runs from deep, John Mulligan’s ability to get out and win possession and Alan McLoughlin’s gift of ghosting into just the right position at the right time.

The individual match ups on Sunday will be key - just who will St. Mary’s detail to watch John Mulligan as Jonathan Cassidy and James Glancy are both capable man-markers while there is also the option of moving Micheal McWeeney back to his more natural environment in the defence.

St. Mary’s have other decisions to make - James Flynn at full-back has shown promise but has struggled against pacy forwards and a move back for Conor Farrell could be on the cards, although it might rob St. Mary’s of his ball winning ability in the middle of the park.

Mohill too have a few decisions to make - who picks up Robbie Lowe is the most obvious question as the County man has been the cutting edge of the Mary’s attack. Michael McGuinness’ experience could be key but Eanna Madden has the pace to match Lowe so a dilemma for Mohill.

And if the pacy Ray Mulvey plays for St. Mary’s, who follows him with Daniel Beck vitally important for Mohill not only for his defensive duties but for driving his team forward.

But the crucial battle is around the middle of the park where Shane Quinn and Ronan Gallagher come up against a powerful ball-winning St. Mary’s quartet that has been the foundation of their run to the final.

Daniel Lowe and Clement Cunniffe are excellent ball winners and give Mary’s their platform, never moving too far beyond the middle of the field but breaking up the opposition and supporting the defence. Add in Conor Farrell, Jimmy Guckian, Conor McWeeney and James Glancy in the area and the Carrick men have a powerful foraging unit.

Combating them will be Mohill’s wonderful mobility - the pace of Shane Quinn, Ronan Gallagher, Danny Beck and Alan McLoughlin mean when they get moving, Mohill are very hard stopped but Mary’s have plenty of pace as well.

And given the way they like to get the ball in quickly to John Mulligan, Mohill may bypass the middle of the field altogether and try to run the Mary’s midfield around.

Another question for St. Mary’s is do they hold Jimmy Guckian in reserve or start him - the veteran is a key player for Carrick, his experience and power huge assets but one feels that a concentrated 20-25 minutes in the second half, as he showed against Melvin Gaels, could yield greater rewards for St. Mary’s.

John Mulligan could be a real match winner for Mohill even if he didn’t score in the semi-final. His lack of scoring didn’t, however, undermine his impact on that game as his pace and ability to throw a defence into panic and if he gets a run on Carrick, it will go a long way towards a Mohill victory.

Finals often come down to unheralded players - Padraig Tighe grabbed two goals in the semi-final, Alan McLoughlin, Colm Beirne and Ronan Kennedy all have the ability to be match winners on the day, Kennedy in particular has a goal scoring touch that could prove vital.

Ray Mulvey hasn’t seen much action due to injury but the class is there while Alan Doherty and Brian O’Donnell have been quietly efficient all year, Doherty has been racking up big scores and O’Donnell has the experience of the big day.

Experience wise, St. Mary’s have an edge in experience after appearing in two finals in 2010/2011 but as Mayo discovered last weekend, that carries its own baggage so there is a fair degree of pressure on Mary’s to ensure it won’t be a third loss.

Mohill lack the experience but won’t carry the pressure that St. Mary’s face and that could prove just as important in the long run and although we have said it many times, it still rings true as when Mohill hit top forward, they sweep all before them. They must, however, sustaini that form for longer periods if they are to lift the Fenagh Cup.

St. Mary’s are that bit more consistent, a bit steadier and they have looked like a team on a mission all year, there is definitely a sense of something to prove with the Carrick men this year.

Contests between these two teams are notoriously tight but if St. Mary’s establish their expected dominance around the middle of the field, St. Mary’s may just have enough to carry the day.