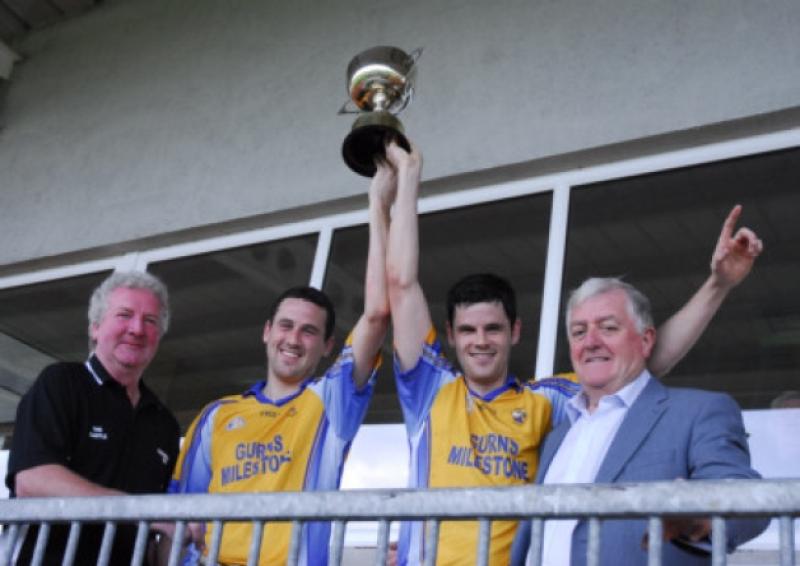 Deployed as an extra defender in front of Conor Beirne, James Rooney proved a match winner at the other end with a dramatic last gasp goal.

Deployed as an extra defender in front of Conor Beirne, James Rooney proved a match winner at the other end with a dramatic last gasp goal.

Saturday’s GWP Intermediate Championship fFnal took quite a while to get up to speed but once it did, it caught the imagination as a dominant Glencar/Manorhamilton were put to the pin of their collars to see off a Conor Beirne inspired Eslin.

That Rooney’s goal came in the last seconds of normal time and it took a block from full-forward Aaron Hickey on his own goal-line early two minutes into added time to stop Beirne from grabbing his hat-trick from a ferocious free-kick only highlights the drama.

Eslin didn’t turn up in the first half as Glencar/Manor’s patient play in attack and dominant defence where Adrian O’Flynn and Rooney shackled Beirne and 39-year-old Shane Devaney controlled the tempo of the game proved too much of an obstacle.

Leading 0-7 to 0-2, Manor could and should have been out of sight as Conor Dolan walloped a shot off the crossbar and they missed a lot of good chances but once Conor Beirne held off three men to bury the ball in the Manor net just a minute into the second half, the game was back in the melting pot.

The reliance on Beirne was both Eslin’s greatest strength and their greatest weakness as the former county man carried the scoring burden entirely on his own. Manor could and did devote three players to stopping the full-forward, playing men in front, behind and beside of him throughout the second half to stop far from ideal long balls from finding him.

That Beirne was able to win possession speaks of his strength, determination and skill as the Eslin man was almost like a force of nature in one of the great one-man performances ever seen in a county final.

But there were times when his team-mates dependency on Conor became a liability, one incideent where a team-mate was inside the Manor backline but passed back to a marked Conor rather than advance and try the shot himself.

Glencar/Manor knew what was coming from the Beirne brothers and coped as well as one could hope with Adrian O’Flynn, Shane Devaney and James Rooney doing very well to restrict the younger Beirne while Manorhamilton tried to crowd out Tomas Beirne in the middle of the field

Tomas did make some fantastic catches but Eslin needed more from the talented midfielder as Manor’s mobile pairing of the Poniard brothers dragged him around the field and meant he was back in the backline more than Eslin wanted.

Glencar/Manor’s approach was far more deliberate, using the pace and team-work of Aaron Hickey, Conor Dolan and Alan Hickey to carve open the Eslin rearguard time and time again, their only fault being that they didn’t drive home their advantage.

Manor’s Senior veterans made a big impact too in attack - Dominic Kelly, Colin Ryan and sub Alan Sweeney used their experience to great effect, linking play between defence and attack and working back to restrict Eslin’s long ball deliveries.

Cian McManus and Mark Fox also did well for the Manor men who displayed all the confidence, slick team work and potential of their Senior side and with so many young players on the team, the future certainly looks bright for the north Leitrim men.

Of course, an Intermediate title would have meant altogether more to Eslin but they do go forward to the Connacht Club Championship where they meet the Roscommon representatives in the semi-finals on November 3.

Picking themselves up won’t be easy, particularly after coming so close to a famous victory despite playing so poorly in the first half.

Conor Beirne was the shining light but a few of the Eslin men wilted in the closing stages of the game as the pace seemed to get to them just as Glencar/Manor were ratchetting up the pressure.

Eslin’s own 39 year old Padraig McNulty defied the years with a display full of energy and Ronan Reynolds put in a very solid performance against Aaron Hickey, more than holding his own. Eamon Stenson, Paul Kilcrann and Barry Bohan also did very well for Eslin.

• See www.leitrimobserver.ie for a score by score account of Saturday’s Final