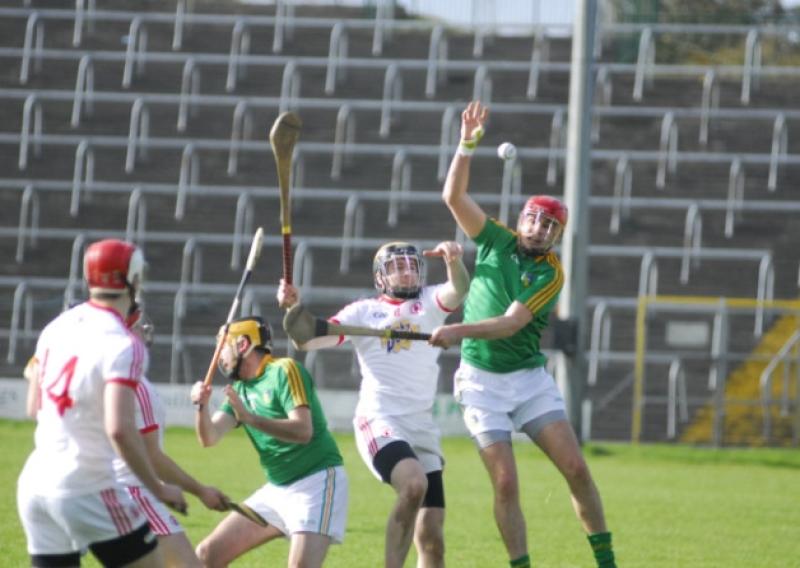 In the most cruel fashion, Leitrim saw their dreams of Allianz Division 3B glory snatched from their grasp with the very last puck of the sliothar.

In the most cruel fashion, Leitrim saw their dreams of Allianz Division 3B glory snatched from their grasp with the very last puck of the sliothar.

Having led favourites Tyrone by five points just 30 seconds into the second half, Leitrim fought a tremendous rear-guard action in the second half before the Ulster men drew level and actually went ahead with less than five minutes to go.

But with defeat starring them in the face, a defiant Leitrim raised their game again and drew level before they engineered two great chances to go back in front.

Heartbreakingly, Leitrim missed both chances and they were made pay a cruel, cruel price when Tyrone captain and man of the match Damien Casey struck a monster free over the Leitrim crossbar from more than ten yards inside his own half.

That monstrous score was the last action of the game, coming after the additional one minute of added time had elapsed, scant reward for a fantastic Leitrim effort over the previous 70 minutes.

Leitrim dominated the first half, combining ferociously committed defence with intelligent and clever forward play as Tyrone were not able to match the work-rate and organisation of an impressive Leitrim.

With Clement Cunniffe in a new anchor position at centre-back and Vinny McDermott lending more solidity at full-back, Tyrone found it very hard to get on top as the forwards, led by Padraig O’Donnell, James Glancy and Michael Poniard worked incredibly hard to create chance after chance.

The second half, facing a strong wind, saw Leitrim start to surrender the initiative slowly but surely as the immense physical effort from the Green & Gold players seemed to be taking its toll as Tyrone started to boss the game bit by bit.

But it was hardly a clear cut dominance as Tyrone found it incredibly hard to break through a fiercely committed and well drilled Leitrim outfit where Paul Earley stood out with a fantastic display in the full-back line..

Here, the management team can take credit as the vast improvement in handling, stick work and skill in possession have made Leitrim real live contenders for the Lory Meagher competition later in the year.

And it was Leitrim who finished the second half chasing the winning scoring only to fall victim to real smash and grab raid in injury time.

Leitrim started well with Padraig O’Donnell converting a free and Zemacoo Moradi seeing a shot cleared by a scrambling defence in the first five minutes. It took Tyrone 13 minutes to level as Gerard Gilmore pointed.

Leitrim were beginning to find their form with O’Donnell (2) and Clement Cunniffe converting frees before Zemacoo Moradi scored a lovely point from play after 20 minutes.

Damien Casey and James Glancy swapped points but crucially, Tyrone finished the half with points from Casey and Ciaran McCrudden to give Leitrim a 0-6 to 0-4 hafltime lead.

Facing the wind, Leitrim would be under pressure but they started to dream just 30 seconds into the second half when James Glancy’s shot hit the post and fell down to Kevin McGrath who did extremely well to gather and feed the ball back to Glancy who goaled from close range.

Tyrone sub Sean Og Grogan made an instant impact with a point that was disputed by some Leitrim players on six minutes and Tiernan Morgan’s lovely long range effort cut the gap to three points.

James Glancy almost had a chance of a second goal but a wild swing saw him miss the sliothar but he did well to regain possession and hook a good shot over the crossbar.

Tyrone, however, were starting to dominate possession further out the field and two Casey frees in the space of a minute cut the gap to two points after 12 minutes.

Another Casey free, this time for over-carrying, cut the gap to one but again, Leitrim fought back as a foul on Moradi, that earned Morgan a yellow card, saw O’Donnell convert another free.

Back came Tyrone once more and two more frees from Casey drew them level with nine minutes to go and the inevitable seemed to come as another Casey free put Tyrone in the lead for the very first time with eight minutes to go.

Instead of collapsing, somehow a defiant Leitrim found extra reserves of energy as James Glancy took off on a pulsating run but was robbed of the sliothar just as he was bearing down on the Tyrone goal.

Tyrone were far from steady and a yellow card for corner back Conor McNally yielded yet another free for O’Donnell to tie the scores with less than three minutes to go and it got worse as Mark Winters was red carded for a wild swing.

Leitrim tried to grab a winner with a man advantage but a long range Cunniffe free into the wind dropped short while sub Liam Moreton didn’t get enough power on a close in chance as the sliothar was gathered by the keeper.

With a minute of added time announced, Tyrone won a free some ten yards into their own half butwith the wind behind him, Casey launched a monster free over the bar to break Leitrim hearts.