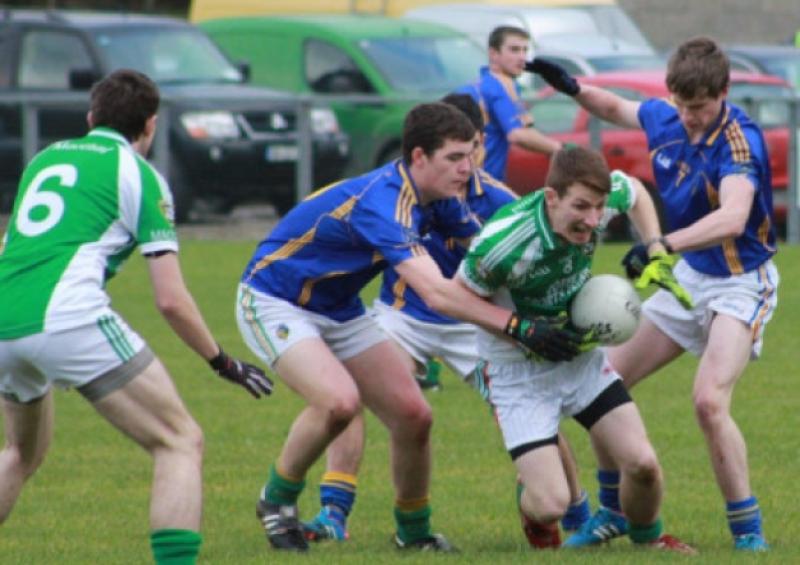 Outplayed and seemingly on their way to a heavy defeat, St. Brigid’s produced a stunning last quarter to claim the U21 Championship crown in fantastic style in Ballinamore.

Outplayed and seemingly on their way to a heavy defeat, St. Brigid’s produced a stunning last quarter to claim the U21 Championship crown in fantastic style in Ballinamore.

U-21 A Championship Final

Last Saturday’s Final ended in a welter of excitement that didn’t look possible when St. Manchan’s led by seven points and looked in a different class to an out of sorts St. Brigid’s.

But the final was transformed in one instant when Conor Gaffney’s spectacular long range effort dipped over the despairing dive of keeper Emmet Higgins and ended up in the back of the net.

That one instant of class infused the Aughawillan, Aughnahseelin and Drumreilly combination as where they once couldn’t win a ball, now they could do no wrong as they surged forward and kicked six wonderful points from play that seemed highly improbable just 15 minutes earlier.

Those points went over from all angles and distances as suddenly St. Brigid’s were on the front foot and literally camped in the St. Manchan’s half for the remainder of the game as a shell-shocked St. Manchan’s didn’t know what hit them.

The thrilling and unexpected turn-around in the final quarter was in complete contrast to what looked to be a routine win for St. Manchan’s who dominated the game but were stunned as they were out-scored by 1-7 to 0-1 over the final 15 minutes.

Much of the game up to then had seemed routine for St. Manchan’s but it was a twist to beat all twists in the final quarter.

It was a testament to the never say die spirit of St. Brigid’s who seized their chance against a St. Manchan’s team who suddenly went from a team full of confidence and seemingly one on the way to a facile win to one unsure and shattered at the final whistle.

St. Manchan’s, made up of players from Mohill and Eslin clubs, must be wondering exactly what they have to do to get across the line as Mohill have now lost the Senior Championship and League Finals while Eslin lost the Intermediate Championship Final.

It was another body blow for a young team in a year marked by so much progress but recovering from this blow will take some time.

But where the game was lost was not so much in Conor Gaffney’s spectacular goal, although it did transform the mentality of the St. Brigid’s players, it was just before halftime as three unanswered points reeled in a dominant St. Manchan’s.

The Mohill and Eslin men had opened up a six point gap despite the loss of the highly influential John Mulligan through injury after just eight minutes and were looking in control but St. Brigid’s dug in and pulled back three points, three crucial scores that halted the momentum of the men in green in their tracks.

St. Manchan’s struck early in the second half with a Keith Keegan goal after just 30 seconds and that seemed certain to spell the end of the Brigid’s challenge before Gaffney’s goal sparked an amazing comeback.

Most amazing was the transformation in St. Brigid’s players themselves - up to Gaffney’s goal, Eanna Madden at centre-back and Shane Quinn in the middle of the park were the game’s dominant personalities.

Madden was covering everything that moved in the defence, his pace and interceptions giving Gary Plunkett and Conor Gaffney no room to manoeuvre with good support from Oisin Madden and Ronan Reynolds.

Shane Quinn was no less influential - he dominated the middle of the field, restricted Mark Plunkett’s influence and when County Minor Kevin McWeeney went off injured, it looked all over for St. Brigid’s.

St. Brigid’s roared into the game - Gary and Mark Plunkett were outstanding, Conor Gaffney at the heart of everything and full-back Noel Plunkett led a resilient defence that never allowed St. Manchan’s a sniff of a chance to rescue the game in the closing minutes.

What really stood out was the way St. Brigid’s exploited their goal, the way their self-belief exploded and the brilliant way in which they exploited a suddenly fragile looking St. Manchan’s whose poise and confidence completely deserted them when they needed it most.

The final brought an end to an intriguing year for Leitrim football, a year that started so promisingly for the County team and ended so disappointingly. The club scene was equally contrasting with some competitive and exciting contests before extreme disappointment for the county’s team at provincial level.

There has been a levelling in standard in club football in the county but despite last Saturday’s loss, Mohill still appear the team best poised for the future if they can break this Final duck of theirs. Champions St. Mary’s and Glencar/Manorhamilton may have a lot to say about that but it should be intriguing in the years ahead.