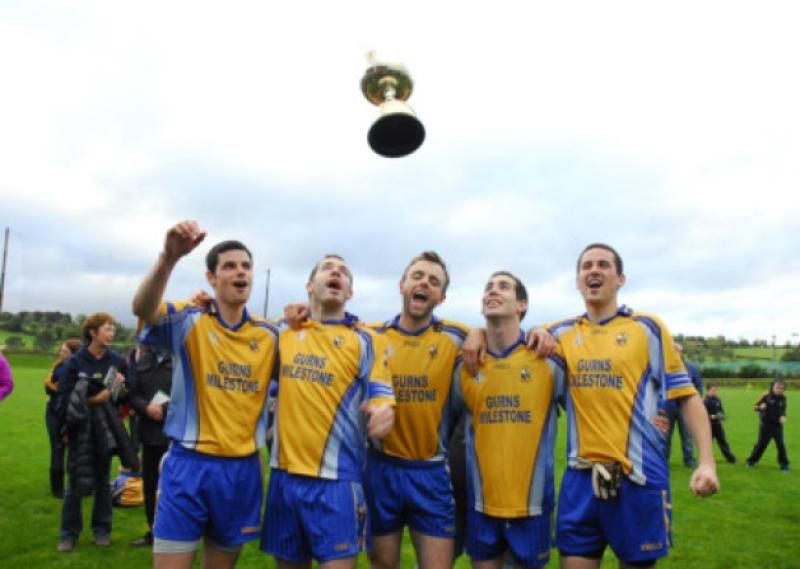 To Glencar/Manorhamilton the spoils, to Conor Beirne the plaudits after an exciting GWP Intermediate Championship Final last Saturday.

To Glencar/Manorhamilton the spoils, to Conor Beirne the plaudits after an exciting GWP Intermediate Championship Final last Saturday.

James Rooney’s dramatic goal in the last minute of normal time grabbed the victory for a Glencar/Manorhamilton side who dominated the contest for long periods and deserved the victory.

But the name on everyone’s lips, even those of the Manor players, was that of Conor Beirne as the Eslin man picked up the man of the match award with a stunning display, scoring 2-6 in front of new Leitrim manager Sean Hagan.

Glencar/Manor joint captain Michael Poniard said “We had two men marking him and he still went to town on us and I thought the lads did a fantastic job on him in the first half and even in the second, they were tight on him. It is just a measure of how good a footballer he is, he is very hard to contain.”

Goal scoring hero James Rooney added “Conor Beirne was just unbelieveable, there was nothing we could do. Every ball that went in, he just caught it.”

The man himself was not in the mood for personal plaudits as Conor, when asked if the Man of the Match award was any consolation, replied with a slight laught “No” before adding it was not a one-man show for Eslin.

“The lads had to supply the ball to me to do it. I probably didn’t get enough, nobody else chipped in but it is not that easy on a big day. We have a young enough players who came in and they were nervous there and hopefully, they won’t hang their heads and they’ll come back again next year.”

The full-forward admitted that defeat was very hard to take after a remarkable second half display - “It is hard to put it into words. The dressing room is quiet in there and it should be hopping. We expected to win and it will put us back for a while and the heads will be down. We’ll have to lift it again for next year.

“Manorhamilton I suppose were the better team on the day, they played better and got the scores when they needed it. I think we were a bit shocked that we were in the final and got off to a bad start. ”

Reaching the Final was an amazing achievement for a club with Eslin’s resources compared to the amazing numbers Glencar/Manorhamilton’s second string outfit possess as Conor revealed “We started off the year knocking on people’s houses to get numbers out for league games. We just fell short at the end of the day.”