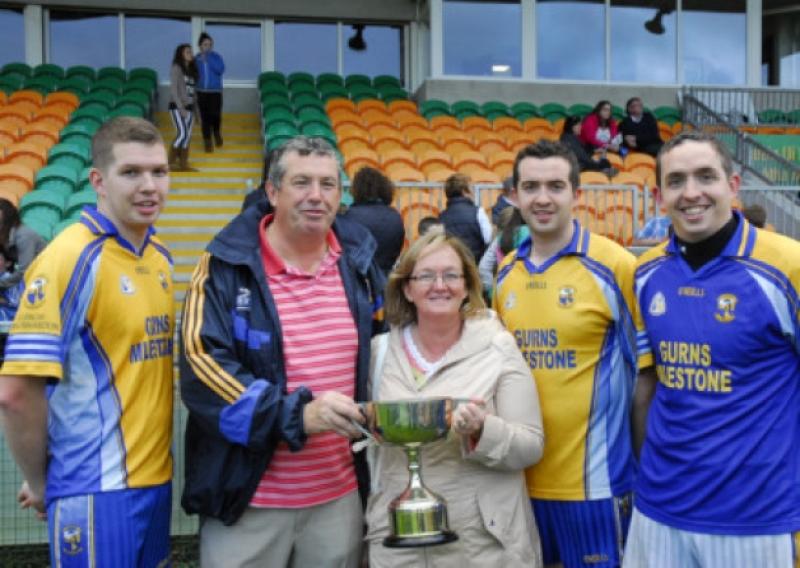 One of the star performers for Glencar/Manorhamilton in their GWP Intermediate Championship Final victory over Eslin, Aaron Hickey, was understandably overjoyed when speaking after the game but he was also full of praise for Eslin and in particular the man of the match Conor Beirne.

One of the star performers for Glencar/Manorhamilton in their GWP Intermediate Championship Final victory over Eslin, Aaron Hickey, was understandably overjoyed when speaking after the game but he was also full of praise for Eslin and in particular the man of the match Conor Beirne.

“Fair play to Eslin, they gave us a hell of a game. In the first half you’d think we were going to go away with it but we knew Conor Beirne - he’s a fantastic player, probably the best in the county, and they were two great goals he got. We were shell-shocked at that minute but we kept going and luckily we got the result.”

When asked if he felt the title was Eslin bound, Aaron pointed to the semi-final replay victory over Glenfarne/Kiltyclogher as a motivating factor.

“I suppose what happened was we got a boost from the Glenfarne/Kilty replay, we went down by six points and then we equalised with two goals in 40 seconds so we knew not to panic. Even in that game we learned a lesson, we never panicked and James Rooney showed great composure to get the goal at the end. I’m ecstatic, I just can’t believe it at the minute.”

Reflecting on Rooney’s match winning strike, Aaron recalled the role he played in the build-up to the all important goal. “I’ll be honest, I miskicked the ball. I was going for a point and luckily it hit Alan Sweeney he gave it to James and bang, back of the net but before that I should have got a goal myself. I don’t care who scores as long as we get the result.”

In injury time Eslin had one final chance and on this occasion Hickey was to the fore at the other end of the pitch as he made a fine save to keep Conor Beirne’s goal bound free at free. Modestly Aaron recalled, “I kind of slipped, luckily I slipped because I’d say I wouldn’t have got there.”

After the disappointment of the defeat in the Senior quarter final Championship Aaron summed up what claiming the Intermediate title means to all associated with the club.

With the celebrations not yet in full flight Aaron was already looking ahead to next year’s championship. “I’m fairly confident for the next few years we’ll be there or there abouts. It’s not a warning for other clubs, we worry about ourselves, we don’t worry about any other team. We’ve a great bunch of lads and that’s all that matters to me. I’m confident in the next few years I’ll have a few more senior championships in my back pocket.”