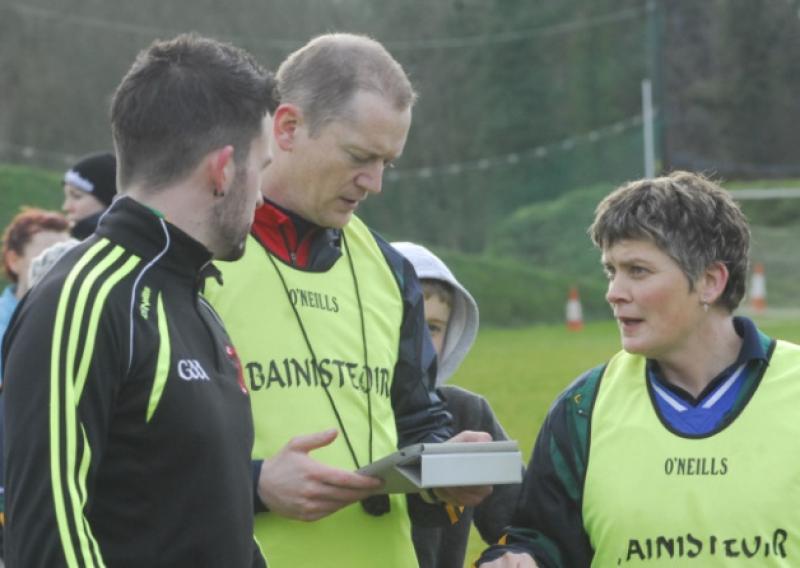 Having seen his side overcome the challenge posed by Tipperary, Leitrim manager Martin Dolan was pleased to have reached the semi-finals.

Having seen his side overcome the challenge posed by Tipperary, Leitrim manager Martin Dolan was pleased to have reached the semi-finals.

“At the start of the year we set our objectives to reach the top four, whether it was first, second, third or fourth we didn’t mind. We wanted to make the semi-finals and today’s victory has clinched that so we have to look to a very tough task with Waterford in the semi-finals.”

Reflecting on the game Martin paid credit to his players for the manner in which they overcame the obstacles that were thrown his teams way, whether it was the swirling wind which affected the forward’s shooting or the fact that two players were sent to the sin bin during the course of the game.

“It kept us on our toes, the girls worked incredibly hard,” was Martin’s assessment.

“Tipperary were in the All-Ireland final last year and they lost by a couple of points but we played them today and we more than matched them. We outpowered them in a lot of positions. We played today’s game for 23 minutes with 14 players so it’s a credit to the players, they had to really work hard and dig deep.”

A week earlier Leitrim travelled to Waterford and despite playing well, returned home empty handed so Martin was pleased to see his team’s efforts rewarded.

“The result, unlike last week, the result matched the performance. We were disappointed after Waterford, for 40 minutes we dominated that game but goals cost us in the end.”

With the semi-final encounter with Waterford scheduled for April 27, Martin and the team will now be focusing their efforts on attempting to secure Leitrim’s place in the Division 3 Final.

“We’ll prepare and look forward to it because that’s what you’re in it for. We will be getting the squad together midway, I suppose in Mullingar on Wednesday and we’ll go back training on Friday and we’ll really push on and prepare.

“With exams and exam pressure and various work commitments we haven’t been able to prepare as much as we would like but that’s been ironed out bit by bit and the panel is starting to grow together.

“There are 15 new players in the panel this year and that’s a huge turnover. There are some very good young players so we’re hopeful and we know the task ahead and we’ll embrace it and give it our best shot.