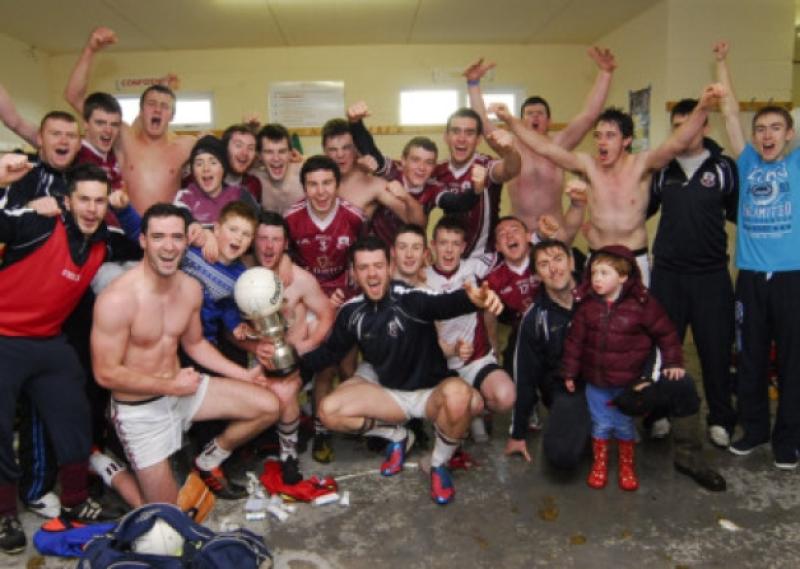 Drumkeerin banished the memory of defeat in last year’s U-21 Final when they got the better of Dromahair in last Saturday’s final.

Drumkeerin banished the memory of defeat in last year’s U-21 Final when they got the better of Dromahair in last Saturday’s final.

U-21 B Championship Final

Having won last year’s decider between the two sides, hopes would have been high in Dromahair that they could retain their title but in Aughnasheelin they met a Drumkeerin side that were on top form.

The scoreline indicates there was only a kick of a ball between the sides at the end of the game but in reality had Drumkeerin been more clinical with their shooting the winning margin would have been considerably more. Over the course of the game Drumkeerin kicked 16 wides compared with Dromahair’s six.

The McHughs, Feilim and Patrick as well as James Gallagher, Jerome Maguire and Jamie Langan were all impressive while Dean Brolly had an excellent game as Drumkeerin bossed matters from the start.

Goals at the start and the end of the opening half gave Drumkeerin six point lead at the half-time and it would be difficult to say they didn’t merit that lead.

Dromahair introduced Gerard Kelly for the second and playing with the wind at their backs they certainly improved and when Joseph Kilcullen goaled with 17 minutes remaining it seemed as though the momentum was with Dromahair.

However, Drumkeerin responded well to that setback and displayed a hunger and desire in the final quarter that ensured they would not be beaten.

Dromahair applied plenty of pressure in the closing stages as they desperately sought a goal that would get them back in contention but ultimately their efforts were in vain as Drumkeerin defended valiantly when they needed to in those frantic closing stages.

While Dromahair may have been doing all the attacking as the game came to its conclusion, it was Drumkeerin who began the brighter as they struck for an early goal.

James Gallagher cleverly exchanged passes with Jamie Langan before applying a composed, low finish past Michael O’Hara and into the Dromahair goal and after a number of missed chances Drumkeerin extended their lead when Langan pointed.

Drumkeerin’s wayward shooting meant Dromahair were still in the game and points from Bertie Cunningham and Joseph Kilcullen brought them back into contention.

Having missed a number of chances Drumkeerin found their shooting boots with points in quick succession coming from Langan and Cathal McCawley.

With five minutes remaining Cian Clinton converted a free to leave just a goal between the sides but Drumkeerin hit back emphatically.

John Gallagher’s pass found Jamie Langan who applied a finish across the Dromahair goalkeeper and into the corner of the goal and that was followed by a pointed free from Jamie Langan.

Dromahair finished the half with the final score as Rory Kelly pointed but as the half-time whistle sounded all associated with the Dromahair team would have known they were facing an uphill battle as they trailed 2-4 to 0-4 at the break.

Dromahair were certainly an improved force in the second half. Cian Clinton opened the second half scoring with a free and that was followed by a point from Michael Clancy as Dromahair sought to get themselves back in contention.

However, Dromahair were punished as they switched off when Drumkeerin were awarded a free. As was the case on several occasions during the game, the ball was played short to an unmarked player and on this occasion Cathal McCawley made no mistake after being found in space.

That point failed to dampen the enthusiasm of the Dromahair players and their captain, Jamie Conlon, played a significant role in the build-up to his side’s goal.

Conlon’s surge forward caused panic in the Drumkeerin defence and when he picked out Joseph Kilcullen a point seemed inevitable. However, Kilcullen thought better of that and drilled a shot into the goal.

Excellent scores from Gary Fowley and Cian Clinton meant with 17 minutes remaining there was nothing to separate the sides on the scoreboard.

Ultimately that would be as close as Dromahair would come as Drumkeerin hit back with points from Patrick McHugh and Cathal McCawley.

Cian Clinton attempted to lift his side again and his two points (one free) situated either side of another Patrick McHugh point meant there was just a point separating the sides with four minutes remaining.

Fittingly it was Drumkeerin who had the final say in the matter as they finished the game strongly with Cathal McCawley’s free quickly followed by a Jerome Maguire point.

In injury time Dromahair pushed for a goal that level matters but the Drumkeerin defence held strong and they held on for a deserved victory.