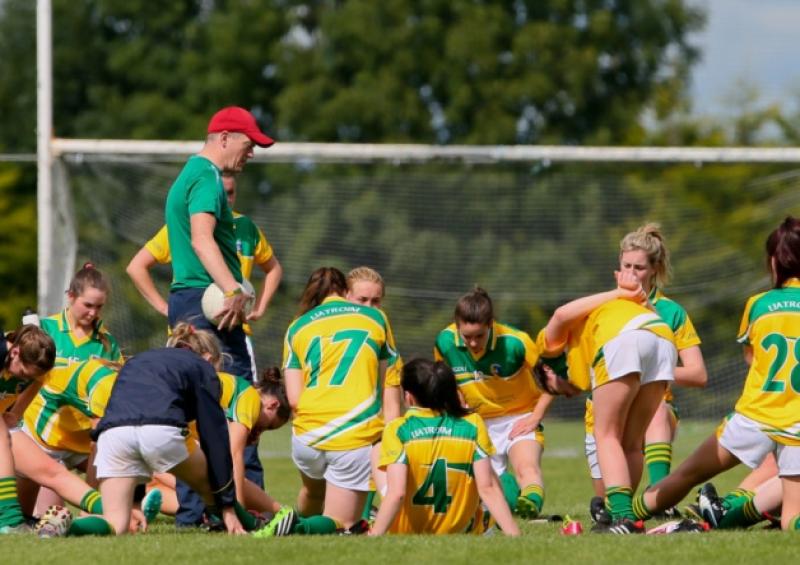 Looking dead and buried at halftime of last Saturday’s TG4 Ladies Intermediate Championship Semi-Final in Mullingar, Leitrim agonisingly came within a few inches of reaching this year’s All-Ireland Final before their hearts were broken by Down.

Looking dead and buried at halftime of last Saturday’s TG4 Ladies Intermediate Championship Semi-Final in Mullingar, Leitrim agonisingly came within a few inches of reaching this year’s All-Ireland Final before their hearts were broken by Down.

A Kyla Trainor goal just 22 seconds after the start of extra-time was the crucial score as favourites Down held off a hugely committed and valiant Leitrim who rescued what looked as if it would be a horror show at halftime to almost grab victory at the end of 60 pulsating minutes.

What-if is a cruel question to ask but you have to ask what might had happened if Clare Owens shot had bounced inside the Down line after the ball crashed off the crossbar?

Or if Roisin Fowley’s late point had gone under rather than over the bar? Or what would the result have been had Leitrim performed during the first half when Down hit an incredible ten unanswered points?

With Down holding a six point halftime lead and looking several steps above what seemed to be a stage-struck Leitrim, nobody would have given Leitrim any hope of over-turning the Down lead.

That lead was up to seven with 17 minutes of the second half gone but then Leitrim started a miraculous fight-back as Aine Tighe grabbed a somewhat fortunate goal when her shot was blocked but spun up and over the keeper for a goal that reignited Leitrim’s challenge.

Yet it still looked as if Down would hold out, particularly when luck deserted Leitrim as Clare Owens saw a wonderful shot cannon off the cross-bar, bounce down but not across the line in a real escape.

Time was not Leitrim’s friend and it seemed that luck was definitely deserting Leitrim when, even though she found the target, Roisin Fowley lifted her shot over the bar when put through one-on-one with Down keeper Sinead Brannigan.

But with the count-down clock ticking ominously, Leitrim found immense reserves of strength as sub Ailbhe Clancy swung over two great points, the equalising score after Aine Tighe robbed a Down player coming out of defence.

With 40 seconds left on the clock, Leitrim were the team with momentum but Down gave a master-class of running the clock down, ensuring that a rampant Green & Gold wouldn’t get the chance they needed to finish the job.

And in extra-time, Down showed just why they were favourites, cutting through the heart of the Leitrim defence with stunning ease to set up the crucial goal for Kyla Trainor, a score that killed off Leitrim’s hopes as the Green & Gold were playing with the strong wind.

Leitrim had chances, particularly in the second half of extra-time, but with the wind, tiredness and Down pressure, Leitrim were unable to get the scores they needed and it took some last gasp intervention from Mairead Stenson to prevent another goal.

Down, it has to be said, probably just deserved the victory - they scored ten unanswered points in the first half and showed an understanding and experience that Leitrim were unable to counter and were it not for keeper Michelle Guckian, who made four wonderful saves, Down would have been far more comfortable.

Leitrim too had a good deal of exceptional performances, none more so than Michelle Guckian who kept Leitrim in the game at times while Lorraine Brennan added huge impetus to Leitrim fight-back when move to midfield.

Michelle Heslin was a real handful for the Down defence while Sarah McLoughlin, Clare Owens and sub Ailbhe Clancy did a great job in rescuing the draw for Leitrim while Roisin Fowley worked her socks off.

The game opened with Down threatening and it took a few blocks to stop shots from Lauren Cunningham and Aileen Pyres before Pyres converted a sixth minute free. Leitrim had a rare attack with Roisin Fowley shooting wide but Leitrim made a dramatic breakthrough on nine minutes.

A short free to Aine Tighe was recycled cleverly through Deirdre Ward before Michelle Heslin was sent clear through on goal, her shot flying like a rocket to the Down net for a dramatic goal.

Unfortunately, the goal didn’t kick-start Leitrim’s challenge, it spurred Down into action and by the time Leitrim got their next score in added time at the end of the half, Down had scored an incredible ten points.

The accurate Pyres put over a free but the dam burst after 15 minutes when Kyla Trainor, Sinead McNamee, Pyres and Trainor against all scored within 60 seconds. Leitrim were finding it hard to break out and two more Pyres points extended the lead, the second a brilliant point from almost on the endline.

Leitrim lifted the siege when Michelle Heslin gathered a loose ball and turned to score but the Green & Gold had a real escape Michelle Guckian made two wonderful saves in the space of a few seconds to deny Lauren Cunningham and Pyres certain goals when the Mourne duo broke through on goal.

An Aine Tighe free two minutes into added time lifted the Down siege with the Ulster Champions leading 0-11 to 1-2 at the halftime interval.

Leitrim would have the wind at their back in the second half but it started badly when Aine Heslin was sin-binned for pulling down Orla Fegan in the first minute. Both sides missed chances but an Aine Tighe free after a foul on Sarah McLoughlin raised a Leitrim cheer.

Sinead McNamee broke clear to point, luckily for Leitrim she didn’t spot a team-mate unmarked in front of goal on minutes but Leitrim benefitted from a soft decision when Tighe converted a free on 11 minutes.

That score co-incided with the end of Aine Heslin’s sin-bin but Down were still looking the more composed and accomplished side as Pyres and Lisa Morgan both pointed to extend Down’s lead to seven points.

Michelle Heslin floated over a good point under pressure but Leitrim got the boost they needed when a long free in broke to Aine Tighe. The Kiltubrid woman’s shot was blocked but spun up off the defender and over the keeper into the net.

Down crucially got the next score with a brilliant Pyres point after a good run but Leitrim were starting to build up momentum - Aine Tighe converting a free as Down missed three great chances to score.

Leitrim almost broke through for a goal when Clare Owens was sent clear but her thunderbolt crashed off the cross-bar and bounced down, unfortunately not across the line as Down cleared their lines.

Leitrim almost broke through again three minutes into added time - Ailbhe Clancy’s high ball broke for Roisin Fowley clear in space but by the time she turned, the Down keeper had advanced smartly and the Dromahair woman shot over the bar.

Time was flying by but Leitrim were flying as well as sub Ailbhe Clancy swung over a huge effort from out the field before Aine Tighe robbed a defender on the way out and Clancy pointed with about 40 seconds left.

There was still time but Down gave a master-class in holding onto the ball in safe areas and Leitrim couldn’t get near the ball, the game going to extra-time where Leitrim opted to play with the wind for the first period.

That extra-time proved costly as barely had 22 seconds elapsed and the ball was nestling in the Leitrim net - Karen McMullen burst through the centre and found an unmarked Kyla Trainor. She initally found Aileen Pyres but with Michelle Guckian advancing, she played the ball back across for Trainor to fist to the net.

Down kept coming - Pyres shot wides, Trainor dropped a shot short and they missed a free while Michelle Guckian made an absolutely vital block on Pyres as she tried to goal and the first half of extra-time ended without a Leitrim score.

True to their nature, Leitrim came roaring back - Michelle Heslin scored a huge point from the right corner just 50 seconds into the second period of added time but although Down’s Megan Doherty received a yellow card and a five minute spell in the sin-bin, Leitrim couldn’t break through.

Aine Tighe had two wides, Anna Conlan saw a shot blocked before Kyla Trainor made sure of Down’s victory with a well worked point two minutes from time.

Indeed, Mairead Stenson did incredibly well to kick the ball clear of Pyres as she threatened to break through for a goal while Down missed a few more chances before the final whistle.

Leitrim had one sniff of a goal when a Michelle Heslin delivery evaded both the Down keeper and Aine Tighe but the ball went wide.

• See next week’s Leitrim Observer for analysis and reaction from Cusack Park.