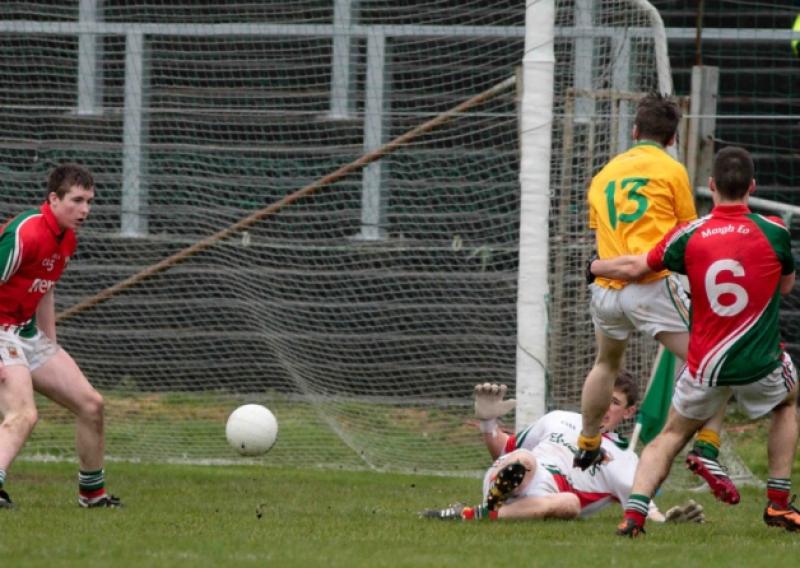 Leitrim set up a Connacht Minor League decider next week against Galway when they scored a hard fought two point win over Mayo in Pairc Sean Mac Diarmada.

Leitrim set up a Connacht Minor League decider next week against Galway when they scored a hard fought two point win over Mayo in Pairc Sean Mac Diarmada.

Leitrim started the game as slight favourites but had to withstand a ferociously difficult challenge from Mayo who were left cursing their own inaccuracy at the final whistle.

A far more economical Leitrim showed a Mayo team who created a worrying amount of goal chances just how to take those chances and it was Leitrim’s resilience and coolness under pressure that told the tale in the crucial last quarter.

Mayo hit the post twice in the second half and were denied certain goals by great defensive blocks at least twice while they missed two clear goal chances in the first half.

Leitrm missed chances too, two really good goal chances but Mayo will probably feel that they left this one behind.

With Mayo hitting three wides, Leitrim went two up after good points from Oisin Madden and Conor Gaffney while Mayo keeper Scott Kilker made a good save to deny Gary Fowley a certain goal.

That miss looked costly when a clear foot-block resulted in a successful Cian Hanley penalty on eight minutes. Both sides swapped points with Conor Gaffney (2) on target for Leitrim.

Mayo had two goal chances as Gerry Canavan’s fisted effort went inches wide after he beat the keeper to a long ball while Brian Reape fisted over the bar with a goal on the cards. Luke Murphy halted Mayo’s run with two points, one a great effort from play, as the half closed with Mayo leading 1-5 to 0-6 at the interval.

Leitrim started the second half best with 1-3 to a solitary Mayo point. Mark Plunkett with two and Gaffney with another free saw Leitrim draw level before Gary Fowley turned brilliantly and sped in to fire low to the Mayo net after eight minutes.

Leitrim had a let-off when Cathal Hennelly crashed a shot off the post when put clean through but luck turned their way when Brian Reape hit the post only for Hanley to gain possession and goal on 18 minutes.

Conor Gaffney hooked over a point while Gary Fowley seemed to be heading for goal only to lose the ball. Hanley had a third goal effort brillianlty blocked by a massed Leitrim defence with five minutes left but Brian Reape levelled once more.

But Leitrim broke in devastating fashion when James Mitchell did well to hold onto the ball and Oisin Madden broke free to put Leitrim back in front.

Conor Gaffney added a free but there was still stime for late drama as a late Mayo goal effort hit the post deep into added time as Leitrim held on.