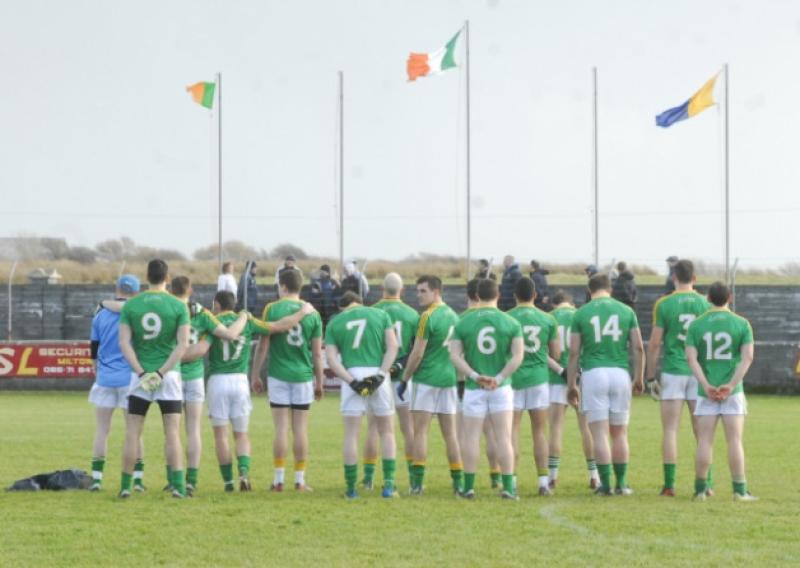 It was essential we followed up our great home performance against Antrim with a solid display on the road and Leitrim’s team, management, and supporters were always going to be happy travelling back from Milltown Malbey with a point in the bag.

The strong Leitrim support that make the long trip were rewarded for their loyalty with an important point, even if things looked decidedly dodgey entering the final few minutes as Clare led by two. The eight minutes of additional time allowed Leitrim draw level with substitute Ray Cox and Emlyn Mulligan landing a free apiece to share the spoils after a hard fought battle.

While Clare looked like the likely team to win out in the second half, Leitrim never lost belief and pressed the game to the final whistle and got their just desserts. This will have pleased Sean Hagan and his backroom team enormously. Winning spreads such belief like the measles in a crèche.

With a break until Sunday, March 2, to Leitrim’s next game against Carlow in Pairc Sean the management and squad will be happy with where they find themselves to date. They will also know they have a lot of work to do on aspects of their game.

Principal amongst these is our tendency to play much better when against the wind than with it. This is down to the side’s mastery at playing the running game and our capacity to funnel our wing forwards back and allow our half-back line explode from defence once an opposition’s possession is turned over.

The problem that arises is that when playing with the wind we tend also to withdrawn our half-forwards into a more defensive role leaving that vital link between offence and defence under-manned.

Simultaneously, your opposition will tend to hold more players back when they are defending against the elements, leaving less space in the opposition half to run into from deep. Only speed in transferring defence from attack can counter this while achieving the most efficient use of valuable effort and energy.

This is not a new phenomenon – it is a problem we regularly encountered when deploying a similar strategy during Dessie Dolan’s managerial reign. It’s not exclusive to Gaelic games either. It was a quandary the Irish soccer team failed to adequately resolve at any time during Trappatoni’s reign.

The Italian’s insistence on playing an extremely defensive midfield meant we constantly failed to get sufficient support to our striker(s) and fell foul of a lack of goals. This was especially true if the opposition took the lead as we learned miserably in the European finals.

The positive for Sean Hagan is that his side are keeping constantly in touch with any opposition and, if they fall behind, it’s not by any great deal. In the case of the FBD final we took the lead from the throw-in without relinquishing it – a great way to win any game.

Our ability to bag a goal proved our saviour again against Clare (as it did against Sligo) in stopping the opposition’s momentum. Retaining a goal threat throughout this campaign will be essential. The results have already shown Wicklow’s capacity to wrack-up three pointers – they have hit six in their first two games and that’s precisely why they currently top Division 4. Incredibly, despite this, Tipperary has a better scoring average with their huge 2-24 to 1-8 win over Carlow in round one standing them well.

Their draw with Waterford at the weekend was a good result for us and point difference will play a part in this league yet. We currently hold fourth, with Clare’s superior scoring difference of just two points allowing them the slightly better view in third.

This makes it all the more important for us to eke out every score we can especially when playing with the wind. This will require playing a little further up the field and delivering accurate passes over greater distances, but I believe we have players of sufficient quality to do this.

Such a tactic requires a huge input from midfield and goalkeeper – the knowledge that you will win primary possession (at least from your own kick-out) allows a little more creative caution to creep into a side especially amongst the foot soldiers in the half back and half forward lines.

That’s an exciting prospect for this Leitrim team as far as I am concerned. We have no one to fear in this league, and I know this is a mantra Sean and his management team are distilling in every player on the panel. We need to let this belief flow freely amongst the supporters too. Combine that belief with desire and you create a powerful force.

Both elements were at the core of the two most impressive sporting victories I saw over the weekend – Ireland’s outstanding performance against the Welsh in the Six Nations and Mount Leinster Rangers incredible win over the favourites Loughgiel Shamrocks in the Club All Ireland Hurling semi-final. I look forward to seeing both attributes flourish in this promising Leitrim side.