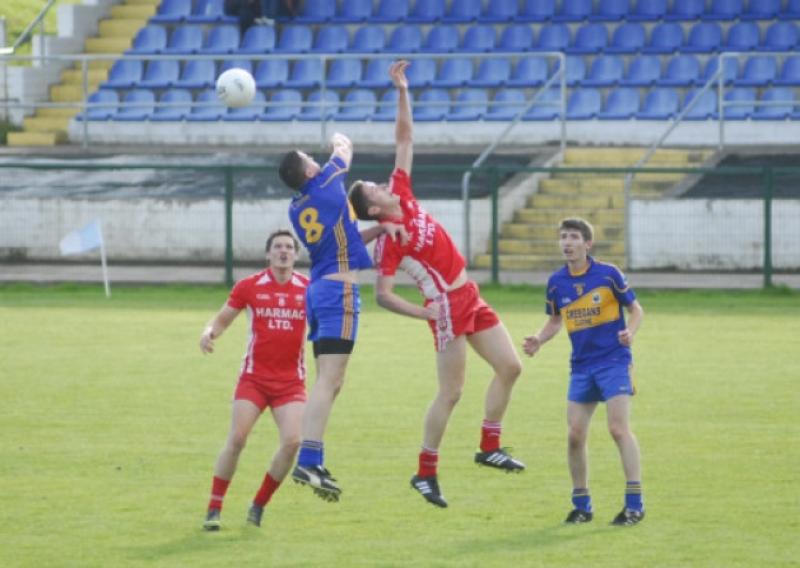 Dromahair started and finished strongly against Cloone last Saturday to book their place in the last four of the GWP Intermediate Championship.

Dromahair started and finished strongly against Cloone last Saturday to book their place in the last four of the GWP Intermediate Championship.

While the ten point win illustrates Dromahair’s superiority, it fails to fully reflect the story of the game as Cloone had plenty of chances over the course of the game and when there was just a goal between the sides, early in the second half, Dromahair’s Kieran Meehan made an excellent save to keep his side in front.

Dromahair’s strong finish was reminiscent of the manner in which they began proceedings as they made their intentions known straight from the throw-in.

A good ball Declan Fowley released Kevin Conlan who raced towards goal before dispatching his shot past Kieran Casey.

After Kevin Conlan extended the Dromahair lead with a point, Cloone gave an indication of their ability as an attacking force for the first time.

A ball over the top of the Dromahair defence from Gavin Reynolds allowed Seamus Maguire the opportunity to race through on goal. He managed to knock the ball through the legs of Kieran Meehan but fortunately for Dromahair the effort was cleared off the line.

When the ball was cleared as far as Michael Bohan, he made no mistake to register Cloone’s first score.

That was quickly followed by two Damian O’Donnell points, one free, as Cloone fought their way back into contention.

After Kevin Conlan and Damian O’Donnell (free) exchanged points, Dromahair hit back with points from Cian Clinton (free) and Stephen Smith to enjoy a three point lead with nine minutes of the half remaining.

Cloone will feel they should have been closer to their opponents at the interval but the only addition to the scoring before the interval was from a Adrian Nicholls point as Dromahair led 1-4 to 0-5 at the break.

Dromahair started the second half brightly and extended their lead with a Kevin Conlan free but they were left thanking their goalkeeper Kieran Meehan when he made an excellent save to deny Adrian Nicholls.

An excellent Cian Clinton point further extended the Dromahair lead and that was followed by points from Conor Kelly and Fergal McMorrow as Cloone looked to be in trouble.

Cloone were handed a lifeline with 11 minutes remaining when Dromahair were robbed of possession while trying to play the ball out of defence and when the ball broke to Damian O’Donnell he finished past Meehan to rekindle his side’s interest in the Championship as the gap was reduced to three points.

Cloone failed to build on that score while Dromahair were able to introduce Gary Fowley for the closing stages and he scored three excellent points while Kevin Conlan scored his second goal of the game with six minutes remaining to secure victory and Dromahair’s passage into the last four.

A 10 point winning margin in a championship game will be most welcome in Dromahair but Saturday’s performance also illustrated there is room for improvement.

Dromahair began with a real intensity as they tackled in numbers, allowing Cloone no time to settle into the game and at the other end they had forwards of the calibre of Kevin Conlan, Conor Kelly and Cian Clinton to ensure the hard work of the defenders was rewarded with scores.

The problem for Dromahair was that when they dropped that intensity they didn’t look as formidable and but for some wayward Cloone shooting and a fine display from Dromahair goalkeeper Kieran Meehan the final scoreline would have been considerably closer.

Another key to Dromahair’s victory was the strength they had on the substitutes bench. Despite being without the services of Kenny Casey, Adrian Fowley and Stephen Keegan, Dromahair were still able to introduce Gary Fowley, Fergus Meehan and Gerard Kelly from the bench and those fresh legs were vital.

In particular the role of Gary Fowley cannot be understated.

Having caught the eye when representing the county minor team earlier this year, Fowley was introduced with nine minutes remaining, shortly after Cloone’s Damian O’Donnell had goaled to leave just three points between the sides.

The game was delicately poised for an intriguing finale but the introduction of Fowley ensured it was Dromahair who finished the stronger of the sides and despite only being on the pitch for a brief time, he certainly made an impression.

His fresh legs and pace were too much for Cloone to contend with while his display of point taking was outstanding as he scored three points during an impressive cameo.