Shock as superb Ballinaglera dump Eslin out of championship 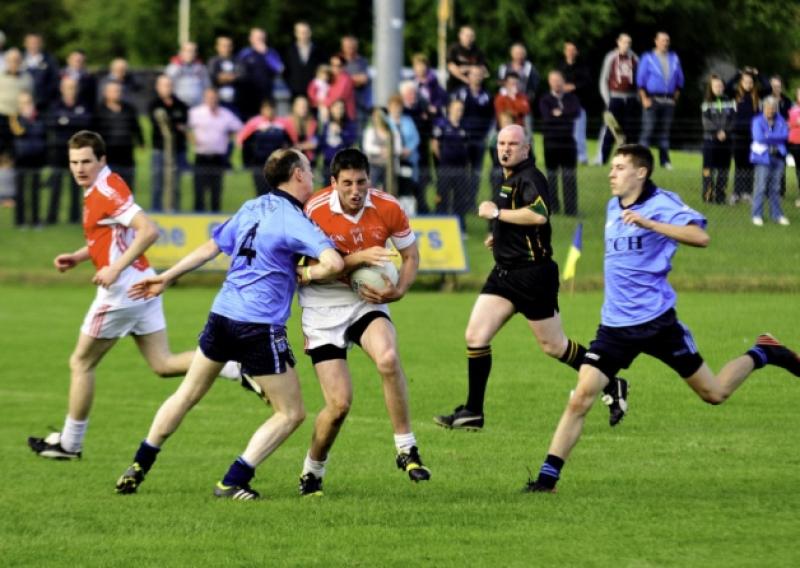 Eslin might have been slight favourites for this year’s GWP Intermediate Championship but they were outclassed and outfought by a very impressive Ballinaglera in Cloone last Saturday.

Eslin might have been slight favourites for this year’s GWP Intermediate Championship but they were outclassed and outfought by a very impressive Ballinaglera in Cloone last Saturday.

Eslin trailed by just one point six minutes into the second half before Conor Beirne missed two great chances to draw level. Those misses proved crucial as Ballinaglera were about to find their shooting boots in spectacular fashion.

After missing a great deal of good chances in the first half, Ballinaglera suddenly came good as they scored a staggering 1-8 to 0-1 before the final whistle to storm into the semi-finals and set down a very serious marker for the Intermediate crown.

The game started in a welter of excitement - Ballinaglera keeper Patrick McGrail will not remember it fondly as he dropped a high ball right into the path of Conor Beirne who rounded him to goal after just 15 seconds.

Maguire was a real handful for Eslin as he set up a point for Fergal Wynne, scored himself and was involved in Seamie McMorrow’s free on seventh minutes. The impressive Enda McGuire got on the end of a move as an Eslin player was robbed in the middle of the park to set up the score.

Eslin hit back with a Mark Beirne point, set up by his brothers Tomas & Conor before Enda McGuire and Conor Beirne swapped points.

Conor Beirne, however, was guilty of an astonishing miss when he won a high free and burst through on goal only to hit the crossbar from just six or seven yards as Ballinaglera cleared their lines, went straight down the field for Enda McGuire to sweep over a fantastic point.

Beirne did add two points before the break as Eslin somehow only trailed by two points against a dominant Ballinaglera at hafltime, 1-6 to 1-4. That gap was down to a point just after the break when Conor Beirne converted a free.

However, Eslin should have drawn level with Conor Beirne seeing a free caught on the line and a blistering shot hitting the crossbar but when Seamie McMorrow converted a somewhat harsh free against Eslin seven minutes into the second half, it seemed to burst the dam.

McMorrow added a fine point from play himself before great work from Wayne Reynolds set up Enda McGuire for a brilliant point on the run from the right corner, Eslin suddenly looking at a four point deficit when just four minutes before they were about to level.

Both teams had poor wides while Padraig Clarke made a brilliant interception after Tomas Beirne made a surging run that looked as if it would open the Ballinaglera defence.

Glera took note of that close escape and Damien McGourty scored an important point after good work from Wynne while an interception in the middle of the park saw Wayne Reynolds score to put Ballinaglera six points clear with 13 minutes left to play.

Enda Maguire added a point before Jamie Stenson got Eslin’s last of the game on 49 minutes. Unfortunately for them, the next score was a goal for Ballinaglera as sub Philip McGourty found Colm McGuire who held off his man and blasted a shot from close range to the roof of the Eslin net.

That was that although Conor Beirne did hit the crossbar with a shot but Eslin were never able to truly threaten the Ballinaglera defence, Seamie McMorrow (2) and Colm McGuire both adding points before the end.

Ballinaglera send out a message

Ballianglera may not have been among the list of favourites at the start of the championship but if they reproduce the performance they gave in Cloone last Saturday, then they will be very hard beaten this year

Despite conceding an early goal to Conor Beirne after a mistake, Ballinaglera refused to be cowed by the score as they took the game to Eslin and dominated the contest from start to finish.

In truth, only for their inaccuracy in the first half, Ballinaglera would have been well out of sight even if Conor Beirne crashed a shot off the crossbar when it seemed easier to find the back of the net.

Eslin’s over-reliance on the Beirne brothers, completely understandable as it is, came back to haunt them as too many Eslin players looked for them first and last, making it much easier for a very fit and commited Ballinaglera team to close them down and halt Eslin’s progress.

But rather than wonder what Eslin might have done, and quite a number of their own supporters questioned their fitness after the game, credit Ballinaglera with a performance that concentrated on their own strengths.

Brendan McGourty did as good a job on Conor Beirne as anyone in Leitrim has done in recent years, restricting his influence and making it very hard for Eslin players to find him.

Colm McGuire rolled back the years with a great display at full-forward, scoring two good goals and linking up well with the speedy Wayne Reynolds and Fergal Wynne.

But most impressive for Ballinaglera was Enda McGuire and Seamie McMorrow - both got through an amount of work all around the field and both contributed five points a piece, scoring some wonderful efforts from play.

Enda McGuire, who had been in with the County Senior panel during the year, certainly showed enough to suggest he is worth a longer stint with the county team as he was the most influential player on the field bar none.

On this form, Ballinaglera are very definite contenders for the title - they are fit, well organised and possess some excellent players, nobody will want face them in the semi-finals.