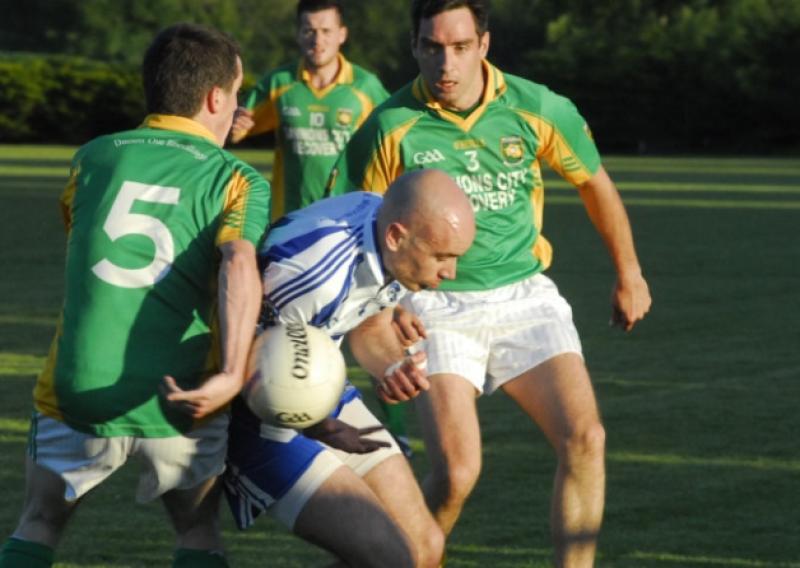 Drumreilly deployed a defensive system which often saw just two players in green and gold jerseys operate in the St Mary’s half and understandably this was difficult for St Mary’s to penetrate and the frustration became evident as the game went on.

With Robbie Lowe well marshalled by John McKeon, St Mary’s were forced to look to others for inspiration and to their credit Micheal McWeeney, Ray Mulvey, Jack DeLacey and Alan Doherty all had a big say in proceedings as they all looked to get involved as much as possible and their work rate was crucial.

The significance of the St Mary’s work rate was that it matched that put in by the Drumreilly players and ensured when Drumreilly had the momentum in the first half that they were not able to build up a significant lead.

St Mary’s will feel there is room for improvement but to over concentrate on what St Mary’s did wrong would be to take away from a fine Drumreilly performance which was more than just full of passion and effort.

Howver, it was Nigel Maguire who was the outstanding player on the pitch. Whether winning breaking balls in midfield, tackling deep in his own or effortlessly slotting the ball over the bar, Maguire had an excellent evening although that will be of little consolation to him.

With the likes of Niall Comerton and Joseph O’Rourke available to come off the bench when needed in the latter stages, there were positives for St Mary’s but in order for them to successfully defend their title one suspects they will need to be even better in the coming weeks.

The dream of retaining their Connacht Gold Senior Championship title is still alive for St Mary’s Kiltoghert but they were made to work very hard for their quarter final win over Drumreilly.

St Mary’s were widely tipped to emerge victorious but not many would have anticipated the game being as evenly contested as it was.

Drumreilly began brightly and took an early lead when Conor Gaffney pointed and it got better for them in the sixth minute.

James Holohan did well to release Francis Holohan whose initial effort came back off the crossbar but Holohan was on hand to find the back of the net from the resulting rebound.

Having struggled to contend with the defensive approach that Drumreilly adopted, St Mary’s were handed a lifeline when they were awarded an eight minute penalty after Anthony Holohan’s foul on Micheal McWeeney.

Holohan was issued with a black card for the foul while Ray Mulvey accepted responsibility for the penalty and calmly rolled the ball into the goal.

A Jack DeLacy point levelled matters and the thought was that perhaps St Mary’s had weathered the Drumreilly storm.

However, that certainly was not the case as Drumreilly replied with unanswered points from James Holohan, Brian Fee and a Declan Maxwell free.

Although it wasn’t going according to the script, St Mary’s continued to dig deep and were rewarded for their perseverance when the ball was played to Brian O’Donnell after some intricate passing and O’Donnell emphatically powered his shot to the Drumreilly goal.

There were to be a further two points apiece scored before the interval meaning there was nothing to separate the sides at half time with the scoreboard reading St Mary’s 2-3, Drumreilly 1-6.

The second half was eight minutes old before Ray Mulvey scored the first point of the half and that was quickly followed by a fine Micheal McWeeney point.

Having put so much effort into the first half it was unclear whether or not Drumreilly would be able to lift their game again but they replied impressively.

Nigel Maguire, who covered every blade of grass in an excellent individual performance, pointed after receiving an offload from James Holohan.

Drumreilly gave their all in the closing stages with the heroics of Declan Maxwell, John McKeon, Conor Gaffney and Nigel Maguire ensuring the game was in the balance until the very end but St Mary’s did just enough to book their place in the semi-final.