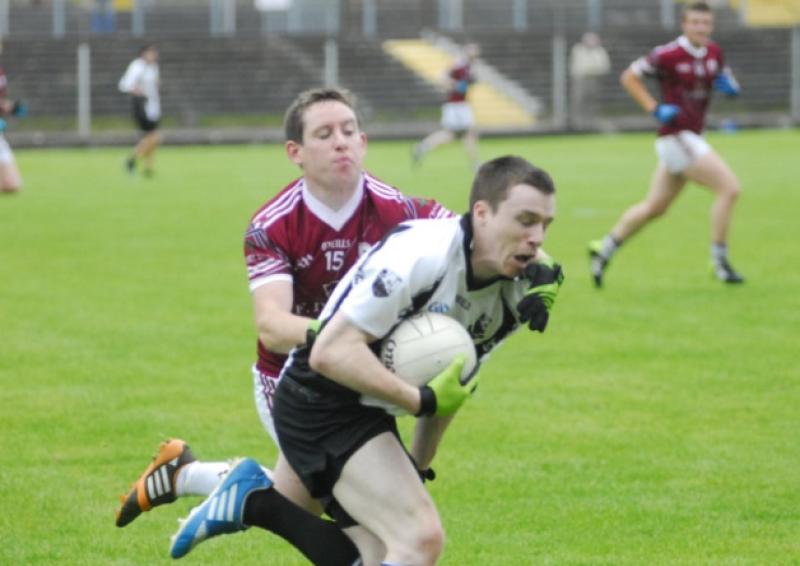 Drumkeerin mixed the Jekyll & Hyde elements of their character in liberal amounts last Sunday before eventually overcoming a spirited challenge from Glenfarne/Kiltyclogher.

Drumkeerin mixed the Jekyll & Hyde elements of their character in liberal amounts last Sunday before eventually overcoming a spirited challenge from Glenfarne/Kiltyclogher.

We expected a barn-storming meeting between two evenly match rivals with plenty of history in the past two years but once Drumkeerin found the net after just six minutes, the Men in Maroon were in control despite the valiant efforts of an outgunned Glenfarne/Kiltyclogher.

Drumkeerin’s problem, one a lot of teams would love, is not that they don’t have the ability to deliver an Intermediate title, their problem is delivering that ability consistently on the field as they mixed some wonderful passages of play with other long periods that must have had their large and vocal supporters tearing their hair out.

The impressive Cathal McCawley summed up Drumkeerin’s day as he terrorised the Glenfarne rear-guard, his pace and strength seeing him drag the defence all over the place and set up great chances.

But like his colleagues, delivering on that undoubted talent is not easy as McCawley, as impressive a player as there is in the Intermediate grade, scored just one point as Drumkeerin relied on Eddie McTiernan for key scores at key times.

The attack of the Gallaghers, Jamie Langan, McCawley and McTiernan are terrific footballers with lots of skill and the day they find their range, then watch out!

In the middle of the park, Colm Clarke and Declan Daly gave them a great platform while their defence, led brilliantly by Aidan Dolan and Jason Byrne, were never truly in trouble against a Glenfarne side who worked their socks off but lack the punch and power to compete with their north Leitrim neighbours but they didn’t have the resources.

Fergal Clancy was at the heart of everything they did but Drumkeerin restricted his influence while Darren Murray & Niall Clancy had their moments but they couldn’t pentrate a mobile and strong Drumkeerin backline.

In defence, Glenfarne struggled but fought manfully but, in the end, they couldn’t match Drumkeerin’s strength around the field.

Good start not half the battle for Drumkeerin

Drumkeerin got off to a blistering start last Sunday in Pairc Sean Mac Diarmada as Eddie Tiernan fired over two points and Jamie Langan produced a fantastic finish as he chipped the keeper on the run for the game’s only goal on six minutes.

Drumkeerin also saw Langan blasting wide from in front of goal but a huge Fergal Clancy point from 40 yards out on the left wing gave a shaky Glenfarne/Kiltyclogher a ray of hope.

The County star would go on to add two more points in the space of a minute, one from play under immense pressure and the other a long range free to leave just two points between the teams before James Gallagher scored a brilliant point from the left corner.

Again Drumkeerin came back with a fine score from McCawley to leave them 1-6 to 0-5 in front at the halftime break and that lead was quickly extended by a huge Keith Gallagher score from the wing.

But Drumkeerin had a real escape when keeper Conor Woods made a vital save to deny Niall Clancy a certain goal after a one-two with Darren Murray.

Glenfarne/Kilty had an escape of a different sort when James Murray was just yellow carded for kicking out at Jason Byrne after Murray felt he was fouled himself, the card could and should have been red.

Dermot O’Rourke fired over after good work from Darren Murray and Niall Clancy to cut the gap to three and a huge score from the corner from sub Declan Sweeney on 45 minutes had Glenfarne/Kilty pushing forward in search of scores.

However, Drumkeerin demonstrated their class with their response as James Gallagher scored a fine point, Eddie McTiernan converted a great effort from distance before he thumped over a wonderful score from the left corner.

Jamie Langan added a point as Darragh Keaney made a good save to deny McTiernan a goal before Fergal Clancy finished the scoring with a well taken free four minutes from time.