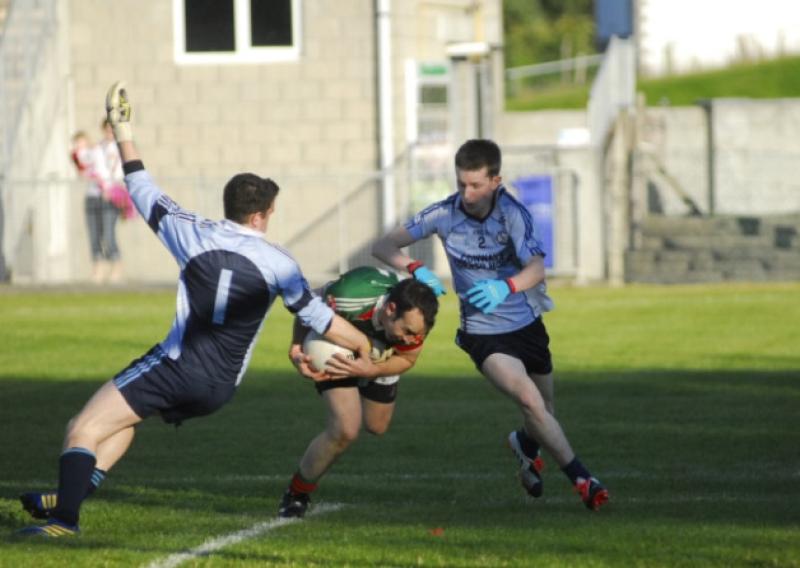 Paddy Higgins’ side signalled their intentions as early as the opening minute when Shane Walsh scored the game’s opening goal. Kiltubrid fought back to lead the game at half-time with a Kealan McKeon goal from a penalty the highlight of Damian Eames’ team’s first half display.

But the 2002 champions fought gallantly and dominated a second half which saw Kiltubrid limited to just one second half point. Brian Mulvey’s only green flag of the game twelve minutes from time the instigator for an Allen Gaels victory, while his brother Thomas slotted over two scores of his own during a second period which saw Gaels score 1-7.

Allen Gaels last captured the senior championship 12 years ago when they retained their 2001 title by beating Melvin Gaels. The dream of returning the cup to the banks of Lough Allen grew legs as early as the opening minute when Walsh broke free of his marker after receiving the ball from his left. His sharp turn brought him in front of Kiltubrid goalkeeper Brendan McCormack before he lashed the ball into the net.

The game was held up for a short time following the opening score as a player from each side received treatment following a clash of heads. But the action continued shortly after as well taken points from Noel and James Gill on seven and eight minutes respectively, left a point between the sides at 1-0 to 0-2 in Allen Gaels’ favour.

Both teams shared wides in the tenth minute. Allen Gaels hitting the first of a total of ten wides during the course of the game, while Kiltubrid were guilty of four of their own.

Noel Gill levelled the game from his right boot on 16 as he converted a free following a foul on Kiltubrid captain Pat Moolick. A neat one-two move between Emmet Mahon and James Gill led to Gill’s second point as the green and red moved into a one point lead at 0-4 to 1-0.

Kiltubrid enjoyed a short spell of dominance as Gaels suffered a 11 minute period without a score. But the 2005 champions failed to take advantage and the Drumshanbo side eventually sent over their first point of the game courtesy of Martin Beirne who was afforded plenty of space and time in front of the posts.

The game was not level for long however. With seven first half minutes remaining, referee Seamus Mulhern awarded Kiltubrid a penalty following a foul inside the Allen Gaels sqaure. Kealan McKeon sent Diarmaid McKiernan the wrong way as he placed the ball side footed to the keeper’s left. Kiltubrid holding a 1-4 to 1-1 lead.

Mulvey slotted over another point on 25 before Alan Wynne hit Gaels’ fourth wide two minutes from the break. Niall Foley struck for his only point four minutes into injury time as Kiltubrid held a three point lead at the break.

Allen Gaels took total control in the second half although it took until the 36th minute for them to register a score. Having risen highest to claim a free from deep, captain Martin Rafferty dodged the tackle of an opponent before neatly turning and firing the ball over the crossbar to cut Kiltubrid’s lead to two.

Both Rafferty and fellow forward Nicholas Moore passed up good chances to cut the lead to its slimmest on 43 and 46 respectively.

Brian Mulvey had different ideas as he scored Allen Gaels’ second goal of the game on 48 as himself and Moore played a one two around two Kiltubrid defenders. Mulvey received the ball at the back post before letting it drop to his kicking foot and hammering past McCormack. The Drumshanbo side now leading by 2-3 to 1-5.

Allen Gaels had enjoyed a good spell of control over their rivals and added a fourth point to their tally on 49 as Thomas Mulvey did well to recycle substitute Daniel Egan’s attempted shot at the posts from a 45.

James Gill then completed his hat-trick of points for Kiltubrid with nine to go, but this was to be his side’s only score of the second half.

If Allen Gaels are to go one step further and progress to this year’s showpiece, then they will need to be much more accurate with their kicking. Two of their ten wides came on in quick succession as both Rafferty and Brian Mulvey misjudged the angle of the posts.

Fortunately for the pair though, the latter was afforded a chance to atone for his error on 56 as he split the posts from close range after he was fouled by Dermot McKeon. Allen Gaels now leading by three points at 2-6 to 1-6.

Alan Wynne then made it 2-7 with his only point of the game as he took advantage of a momentary lapse in concentration from the Kiltubrid back line.

Wynne was again involved in Brian Mulvey’s final score of the game as he found Moore who in turn teed up Mulvey with a quick hand pass between two Kiltubrid defenders.

Kiltubrid were beginning to become desperate as time wore on. James Gill’s shot towards goal was comfortably dealt with by McKiernan in the final minute. With a gap of six points to bridge, this was to be the final act of an entertaining last eight encounter.