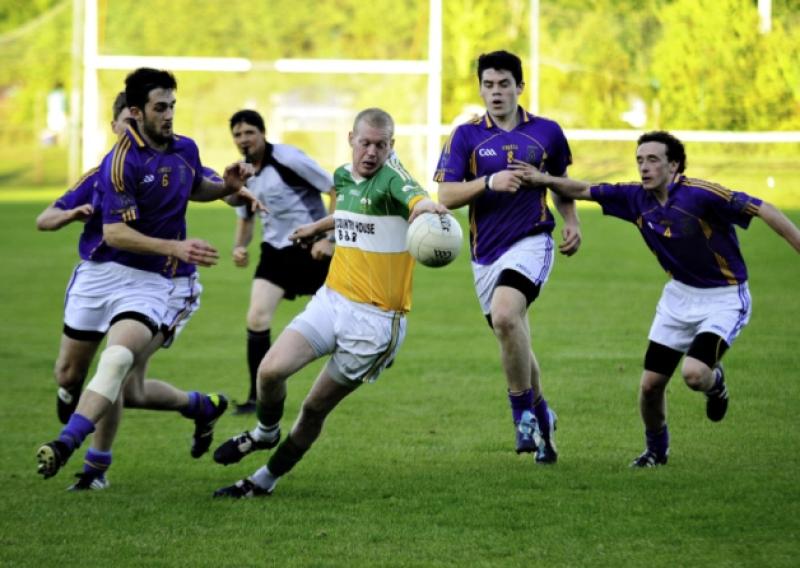 A youthful Aughawillan upset the odds and perhaps even their own fans as they over-whelmed hot favourites Gortletteragh last Saturday in Cloone.

A youthful Aughawillan upset the odds and perhaps even their own fans as they over-whelmed hot favourites Gortletteragh last Saturday in Cloone.

A tremendous second half performance saw Aughawillan out-score the previously unbeaten Gortletteragh by 1-8 to 1-1 over the second 30 minutes to deservedly claim a place in the semi-finals.

Central to Aughawillan’s victory was two key factors - a blistering start that saw them score 1-2 in the first three minutes to settle a young team, a start that gave them belief and something to fight for despite Gortletteragh battling back to lead at the halftime interval.

What followed in the seconds after changed the flow of the game. Referee Brendan Sammon issued a straight red card, apparently for abusive language, to the Gortletteragh men meaning Duffy could not be replaced.

With that the game was transformed - the impressive Ciaran Gilheaney tapped over a free to tie the scores and although Gortletteragh levelled, it was Aughawillan who were transformed as they suddenly found extra speed in every sector of the field.

The match was tightly balanced at the time and Aughawillan could very well have gone on to win such was their performance but the dismissal destroyed Gortletteragh and inspired Aughawillan in equal measure.

Ciaran Gilheaney was the key man for Aughawillan - Gortletteragh never got to grips with him and his tally of 1-6, mainly accrued when the game was in the balance, was a key factor with his point after a Gortletteragh penalty another inspiring point.

Noel Plunkett, Stephen Gilheaney, Sean Flanagan, Morgan Quinn and Mark Plunkett, in the last quarter, made big contributions to Aughawillan’s victory which was built on their traditional values of hard work and intense commitment.

Gortletteragh never truly got going apart from one spell midway through the first half and the reliance on Cathal McCrann to drive them forward, to provide leadership and take scores proved too much of a burden even for someone who performed herculean efforts last Saturday, rivalling Gilheaney for the most impressive player on the pitch.

The game started with a real bang as Ciaran Gilheaney tapped over a free before Gortletteragh lost the ball in the middle of the park, Sean Flanagan provided a great pass to an unmarked Gilheaney who buried the ball in the back of the net.

Morgan Quinn thumped over a great point on three minutes as Gortletteragh were stunned but a Cathal McCrann free steadied them before Padraig Gallagher disrupted a high ball into the Aughawillan goal-mouth and Neil Quinn finished with real aplomb for a Gortletteragh goal.

John Reynolds pointed after a poor clearance with keeper Colin Maguire doing well to keep out a powerful McCrann shot on ten minutes.

The rest of the half was tit for tat with Gilheaney, Moragan Quinn (2) and Mark Plunkett on target for Aughawillan and James Campbell and McCrann on target for Gortletteragh before Campbell notched his second on 24 minutes.

Plunkett and Gilheaney put Aughawillan two in front but two McCrann frees and a fine score from Evan Ward meant that Gortletteragh led 1-9 to 1-8 at the halftime break after a pulsating and high scoring first half.

Padraig McGarry ran through from the throw-in to extend the Gortletteragh lead but Gilheaney added a point that was just tipped over before the game’s major turning point when Colm Duffy was rightly black carded for a high challenge. A red card followed as did as a Gilheaney free as the texture of the game was changed completely.

Cathal Quinn scored a huge point under fierce pressure almost immediately but Aughawillan were now on the front foot and Stephen Gilheaney wasn’t far off a goal when he saw his shot tipped over the bar on ten minutes.

That prompted a flood of scores as Noel Plunkett dodged his way through five tackles before driving the ball over the bar before Stephen Gilheaney grabbed the kickout and fired over the bar.

The game looked all but over with 13 minutes to go when a poor McCrann free was intercepted, Pierse Dolan’s powerful run cut open the defence and Gary Plunkett was on hand to fire the ball to the back of the net.

Mark Plunkett fired over a point but Gortletteragh gave themselves some small hope when Cathal Quinn was pulled down and a penalty awarded, Cathal McCrann driving the ball to the net as Michael Quinn received a black card for the offence.

With the gap at three points, Gortletteragh suddenly had a hope again but not for long as Ciaran Gilheaney immediately settled Aughawillan’s nerves with a priceless point from a very tight angle along the endline.

With Gortletteragh leaving holes in defence, Mark Plunkett fired over two points to seal a famous and well deserved victory.