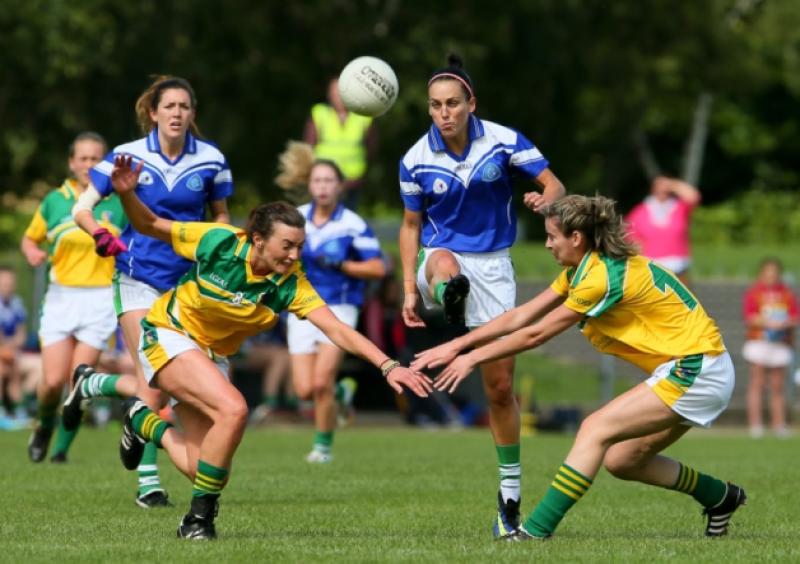 Prior to Saturday Leitrim had not had a competitive game since their Connacht championship triumph over Sligo in McHale Park Castlebar some seven weeks previously.

At times in Banagher, despite the satisfactory eventual outcome, Leitrim’s performance seemed a little ring rusty.

When Limerick put the pressure on for considerable periods of Saturday’s game it was really the experience of seasoned Leitrim campaigners like Sharon Kerrigan, Mairead Stenson, Lorraine Brennan, Sarah McLoughlin, Anna Conlan and Claire Owens that shone to the fore while goalkeeper Michelle Guckian, Áine Tighe, Áine Heslin and Róisín Fowley made invaluable contributions also.

Leitrim now take on Ulster Champions and Division 2 side Down in the semi-final next Saturday in Mullingar while Roscommon, heavily defeated by Leitrim earlier in the year, take on Fermanagh as the semi-finals feature a Connacht v Ulster match-up.

The Leitrim v Down game will be the curtain raiser to the Dublin v Galway Senior Semi-Final next Saturday with a 1.30 throw-in.

The Mourne women will be a serious step-up in talent but with favourites Waterford crashing out to Fermanagh, the battle for the Mary Quinn Cup is probably at it’s most open in years and Leitirm will feel confident as they seek to regain the title won in 2007.

Following an impressive start, Leitrim led by 1-3 to 0-0 after eight minutes. It took a super save by Leitrim keeper Michelle Guckian to deny a third minute goal bound close range shot from Limerick midfielder Kathryn Fahy.

Áine Tighe opened Leitrim’s account with a converted 13 metre free a minute later. Leitrim’s cause received a great boost within the space of two more minutes when Áine Heslin finished to the Limerick net.

Leitrim’s advantage was improved further shortly afterwards when Heslin from play and Tighe from a free shot over.

Following that Limerick held Leitrim scoreless for the next 18 minutes of the half as the Treaty ladies took command in the exchanges after Claire O’Riordan opened the Munster side’s account with a 17th minute free.

Leitrim’s lead was cut back to three points over the next eight minutes when Megan O’Mara shot over from play for Limerick and O’Riordan tapped over another free.

The 18 minute long Limerick siege on the Leitrim posts was lifted in the 26th minute when Róisín Fowley shot the Connacht’s sides first score, a point from play after Áine Tighe had dropped an outfield free shot near the Munster girls posts.

But Claire O’Riordan hit back with a goal almost immediately after Limerick had managed to split the Leitrim defence wide open with a multi player move, involving O’Riordan initially, that seen the ball passed at the finish to O’Riordan at the far post.

Before the interval Áine Tighe fired over a point from play that put Leitrim ahead by 1-5 to 1-3 at halftime. It was a one point game within six minutes of the restart when Dympna O’Brien shot over for Limerick after Leitrim ‘keeper Michelle Guckian seconds earlier parried a point blank O’Brien shot from close range.

Leitrim was put in command two minutes later when Áine Tighe pounced on a poor kick out by keeper, Kristina Hennessey and finished clinically to the Limerick net. Then Róisín Fowley followed with a 40th minute point to increase Leitrim’s lead to five points.

However after this Limerick enjoyed the better of the exchanges over the next nineteen minutes when they held Leitrim scoreless and closed the gap to just two points.

After Michelle Guckian denied a 48th minute Claire O’Riordan goal chance the Limerick girls hit over three unanswered points when their top forward Dympna O’Brien, who was a constant threat to the Leitrim defence, scored two and Megan O’Shea one.

However, a Róisín Fowley goal on 60minutes that was Leitrim’s first score in twenty minutes put her team on the road to an All-Ireland semi-final place. Over seven minutes of injury time was played following Fowley’s score.

Limerick’s Dympna O’Brien from a free and Fowley from play swapped points at opposite ends.