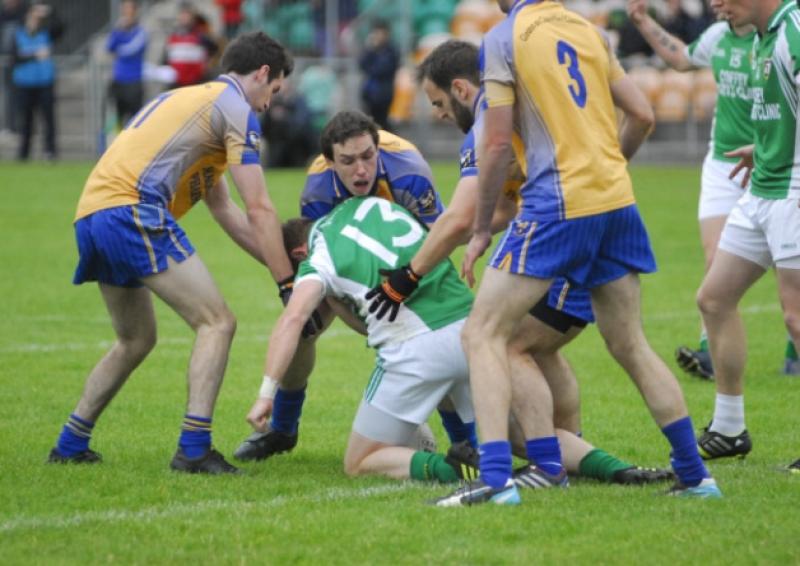 The last of the Connacht Gold Senior Championship Quarter-Finals might not have lived up to the billing in a dour, hard fought and tense encounter but it did show the championship qualities of Glencar/Manorhamilton in all it’s glory.

The loss of Adrian O’Flynn and the concession of a penalty in the same incident put Manor on the rackbut showing the experience hard won in four Senior Championship triumphs and last year’s Division One crown came shining through when the pressure was at it’s greatest.

Although Sunday’s quarter-final didn’t feature both these attacking teams in their full glory, there were still some great scores from both sides but when the pressure was on, it was Glencar/Manorhamilton’s players who delivered.

Glencar/Manor had already set the tone with a bright opening where Evan Sweeney and Adrian Croal replicatedtheir underage heroics of some years ago to cause Mohill’s rearguard no end of problems, problems that didn’t end despite the extra man in defence.

Mohill never displayed the fluency they played with in the earlier rounds of the championship and apart from one brief spell just after halftime, last year’s County Finalists didn’t hit the form they are capable of despite their best efforts.

Darren Sweeney was again the driving force for the north Leitrim men as Mohill were never able to cope with his physical power and driving runs while in defence, Shane Loughlin and James Rooney covered a tremendous amount of ground particularly when Mohill had the extra-man at their disposal.

Glencar/Manor may not quite be the team that won four titles in a row but on the evidence of this game, they will be hard, hard beaten.

The game started with Mohill almost getting in on goal from an Alan McLoughlin pass but Manor were first off the mark Adrian Croal pointed after when a block on a Darren Sweeney shot and the ball came off the woodwork.

Evan Sweeney swept over a good point from space while Croal hit a second point from the cornerbefore Ronan Kennedy sent over a massive fifty with quite some room to spare on eight minutes.

Evan Sweeney hit his third of the game before Pat Gilmartin blocked an Alan McLoughlin shot on 12 minutes before he and Adrian O’Flynn were both yellow carded for an off-the-ball incident.

That card proved very costly on 17 minutes when a foot-block on a Caillin Canning shot resulted in a penalty and a second yellow for O’Flynn, a blow that was compounded by Padraig Tighe sweeping the ball to the net.

However, Glencar/Manor’s response was deadly and effective as Adrian Croal cut through the centre and blasted just over the bar with a goal on the cards. Ronan Kennedy replied with a fine point but Brian McDonald crashed a blistering shot off the Mohill crossbar before the ball went over the bar.

Mohill made a big effort to get back into the game as Manor keeper Luke Sheridan spilled a McLoughlin shot only to block Ronan Kennedy’s close range follow-up shot.

Padraig Tighe and Danny Beck both hit good well worked points to tie the scores but Manor were still dangerous as Ciaran Kennedy blocked a goal bound Adrian Croal shot before Evan Sweeney thumped a 50 yard free over the bar.

A harsh free saw James Glancy point from a very tight angle in the corner after 43 minutes but as Glencar/Manor began to grow in confidence, Mohill began to flounder with Colin Ryan pointing after a short free from James Glancy.

The gap was now three points but Mohill were missing chances, Pat Gilmartin blocking a McLoughlin shot. Padraig Tighe put over a free but the scores were not coming and great work from Niall Brady and Shane Loughlin set up a score for Croal.

Mohill kept fighting with sub John Mulligan pointing two minutes into added time but sub Ronan Flynn made sure of the win with a huge point from 40 yards out.