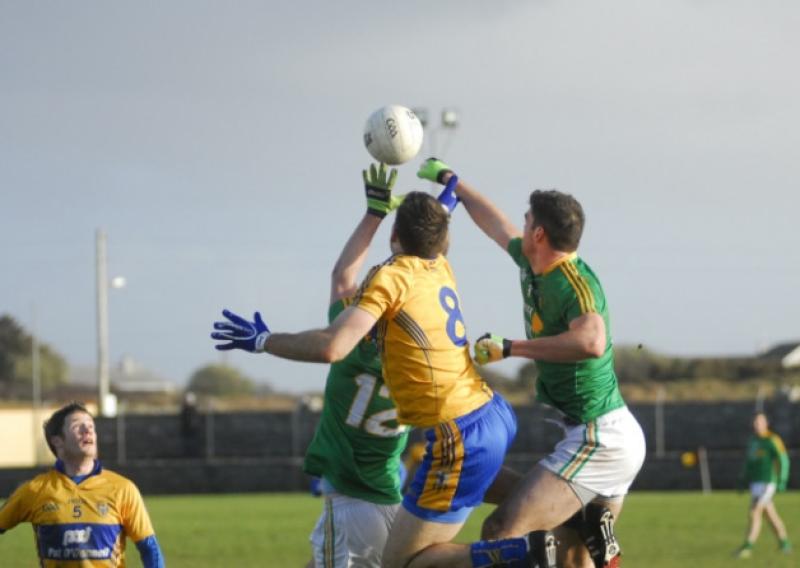 The initial reaction may have been one of disappointment but when they look back on it, Leitrim’s players will be thrilled with last Sunday’s draw in Milltown Malbay.

The initial reaction may have been one of disappointment but when they look back on it, Leitrim’s players will be thrilled with last Sunday’s draw in Milltown Malbay.

Minus the highly influential Paul Brennan and up against a Clare team who should not be taken for granted by anyone in Division Four, the point gained along the shores of the Atlantic could yet be the difference between promotion and disappointment.

Trailing by two points and with Clare seemingly charging forward at every opportunity, Leitrim somehow chiselled out two scoring opportunities to snatch a draw that even the most die-hard Leitrim fan was desperately relieved to get.

Those Leitrim fans, conspicous in large numbers in Clare, gave their team rousing support throughout a fascintating battle between two teams that like to utilise the short-passing game and one dominated by the strong wind straight down the field.

As has been their forte so far this year, the short-passing approach means Leitrim have been highly effective against the wind but they found a team equally adept at the same approach, leading to a contest that ebbed and flowed despite the difficult conditions that included hailstones and driving rain along with bright sunshine and fierce wind.

Leitrim’s refusal to lie-down and their resilience under fierce pressure was heart-warming to the inspiringly large travelling support and probably deserved the reward they got when Emlyn Mulligan popped over a free to draw the game.

The result leaves Leitrim in fourth place, tied on three points with Clare and Tipperary and only one behind a Wicklow team who set the headlines with a win away to Antrim.

And when you look at Waterford, just a week after suffering a hammering from Clare at home, drawing with one of the favourites for the division in Tipperary, it only serves to highlight the importance of the point gained in Milltown Malbay.

That there will be plenty of twists and turns before the end of the League is almost a certainly but one fact cannot be denied - Leitrim have three points more than they did at this stage of the League this time last year and have yet to lose a game under new manager Sean Hagan.

Yet Hagan and his players will be the first to admit that for all the grit and heart and resilience, it was probably Leitrim’s least accomplished display of the year.

The short passing broke down a little too often, Emlyn Mulligan was effectively marshalled by the impressive Martin McMahon and the tactical decision to drop Ray Cox to the bench denied Leitrim of the quick ball outlet.

Cox has been an unsung hero in his work-rate and unselfish running so far this year and that aspect of the Leitrim gameplan was missed against Clare.

Granted the placing of the twin towers of Tomas Beirne and Donal Wrynn together in the full-forward line caused problems for the home side for a period in the second half but Beirne in particular was missing the pace and running of Cox beside him as he needed someone working off the breaks he created.

That is not taking anything away from Donal Wrynn who impressed in the full-forward line, at midfield and in defence and given that he is in just his first campaign in the Senior shirt, the Fenagh lad is fast becoming an invaluable asset for Leitrim.

Picking where to play him is a different matter as the Fenagh man was needed in all three sectors - it is a tough decision but a glorious one all the same.

And there is an over-reliance on placed balls forscores, six of Sunday’s eight points coming from frees.

Gary Reynolds was solid at centre-back and showed good leadership but when Clare ran at Leitrim, they got a good return, particularly down the right wing where Martin Oige Murphy caused an awful of damage against an out of sorts Wayne McKeon.

Credit the home team too as a cause of Leitrim’s problems - the Munster men are a formidble team and like Leitrim were missing a talisman in David Tubridy but Clare must still be wondering how Leitrim denied them all two points.

The absence of Paul Brennan was a key loss for Hagan’s side as the hard running of the Melvin Gaels man, his aggression and awareness makes much of the short-passing game favoured by Leitrim so effective.

In some ways, Sean Hagan will be delighted that his team managed to come back for the draw under such pressure. It hints at a steely resolve and character within the squad and the fact that Leitrim remain unbeaten in 2014 is a great boost for the Longford native.

The remainder of the League promises to be just as hard fought and intense and Carlow, with a win over London, could be back in contention by the time they come to visit Pairc Sean Mac Diarmada on March 2.

The Leitrim manager hopes to have a full strength squad and three more weeks of intense training under his team’s belt by the next game but if they continue to play with the spirit and resilience they showed against Clare, this could yet by a special League campaign.