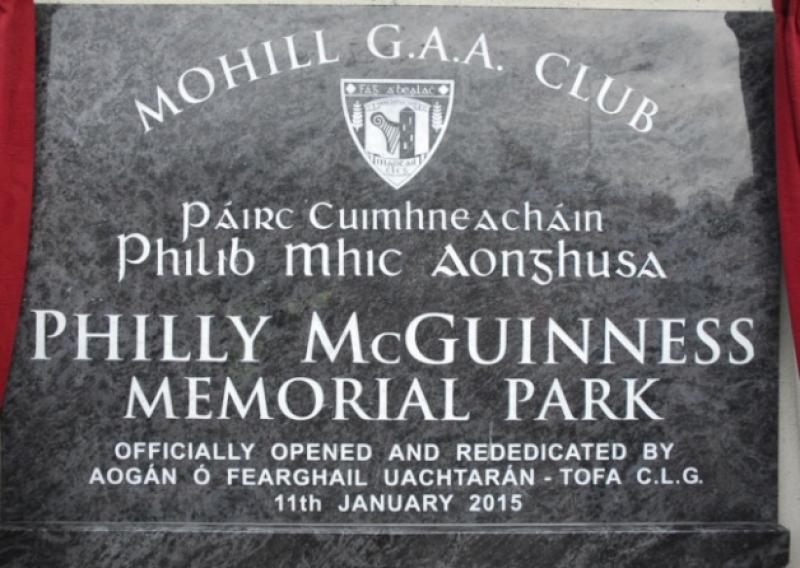 Described as “a role model for all generations, young and old”, Philly McGuinness was remembered in style by Mohill and Leitrim GAA last Sunday when the official rededication of the Philly McGuinness Memorial Park.

Described as “a role model for all generations, young and old”, Philly McGuinness was remembered in style by Mohill and Leitrim GAA last Sunday when the official rededication of the Philly McGuinness Memorial Park.

Before a bumper crowd, the late Philly McGuinness was remembered as GAA President Elect Aogan O Fearghaill unveiled the plaque officially rededicating the park in memory of Philly who passed away in April 2010 after a collision in a club match.

Speaking on the day, Aoghan O Fearghaill joked that he did not think he had ever been at the opening of a pitch where the name of a Saint was removed and replaced by another Saint. He said that he was delighted to see so many people of all ages at the rededication and there was a “whole sense of everybody being together.

“I want to congratulate Mohill GAA Club on their development and I think as we look around the young players here today, I think the way to honour the memory of Philly McGuinness is the laughter and excitement that will be come from the field in the years to come.”

For Danny Beck, it was a special day tinged with sadness as he captained Leitrim on a day that honoured his friend - “It is very special, you’d be honoured to be captain of Leitrim for starters but it was fitting it was in Mohill and it was for a good friend of my own, Philly, and a good friend of the most of the lads here today.”

Recalling the all action style of Philly, Danny recalled “Philly was always stuck in the middle of it, long hair flying around the place but he always had a smile on his face as well, he was never too shy about getting on the ball and working.”

Connacht GAA Council Secretary John Prenty described Philly as “One of the greatest players in Leitrim I have ever come across. A gentleman and a pleasure to be with. Nothing was more important to Philly than playing Gaelic football.

“I don’t think there is any more fitting tribute than every young footballer in Mohill coming to the Philly McGuinness Memorial Park to play football.”

Club Chairman Padraig McLoughlin said “We’re honouring a player we all loved. What we all went through on that Saturday is etched in our memories forever more and we’re delighted to be in a position today to rename our Park so that Philly will be remembered forever more.

“It was a terrific turnout, it just goes to show what people thought of Philly and hopefully, the pitch is in tremendous condition and hopefully, Leitrim will do well on it and finish off a great day for our club,” concluded Padraig.