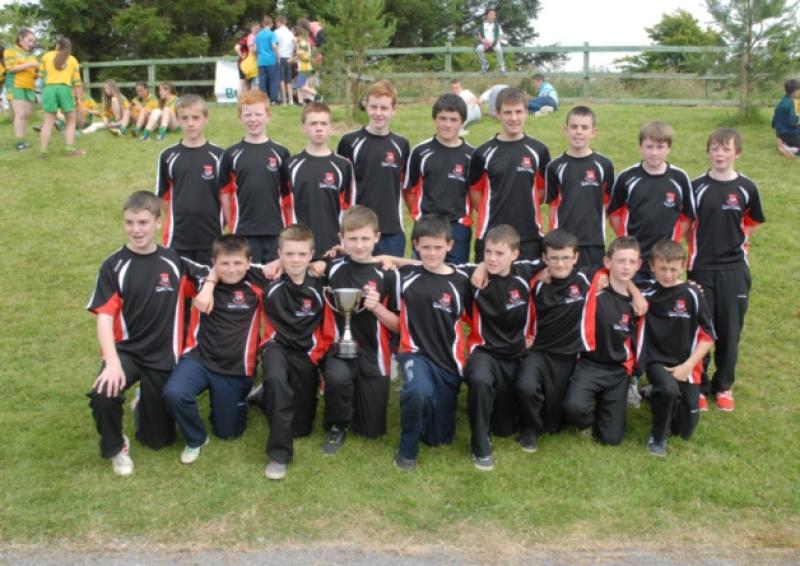 Fenagh St. Caillin’s created their own slice of history when they lift the Feile Peil na nOg Division 7 title last Sunday in Ballyhaunis.

Fenagh St. Caillin’s created their own slice of history when they lift the Feile Peil na nOg Division 7 title last Sunday in Ballyhaunis.

The Leitrim lads won the title when they got the better of Mullingar Shamrocks in a close and hard fought final on a scoreline of 2-3 to 1-3.

Fenagh’s victory follows on Drumreilly’s victory in the Division 6 Final when the event was hosted by Leitrim in 2008 and comes as Leitrim teams proved very competitive in the revamped Feile.

Fenagh’s campaign started on Friday with two games in Tourlestrane as they saw off Grange of Armagh 1-12 to 2-3 and the home side 2-7 to 2-2.On Saturday, Fenagh played visitors Mullingar Shamrocks at home and after a tough and bruising game, Mullingar came out on top 1-9 to 1-4.

The quarter-finals saw Fenagh overcome Tipperary’s Newport Gaels 1-7 to 0-7 before a victory over Ballinalack of Fermanagh (3-6 to 1-7) to set up another meeting with Mullingar.

The final was a real close affair as Fenagh led at the interval 1-2 to 0-2. The second half was equally close and in a nail-biting finish, Fenagh made up for their earlier loss and won on a scoreline of 2-3 to 1-3.

The Cup and medals were presented by GAAPresident Liam O’Neill to the Fenagh captain Robert Maguire to the delight of the proud travelling support the Fenagh team have had.

Following on from being runner-ups last year in Derry to winning this year is a great credit to the Fenagh club.