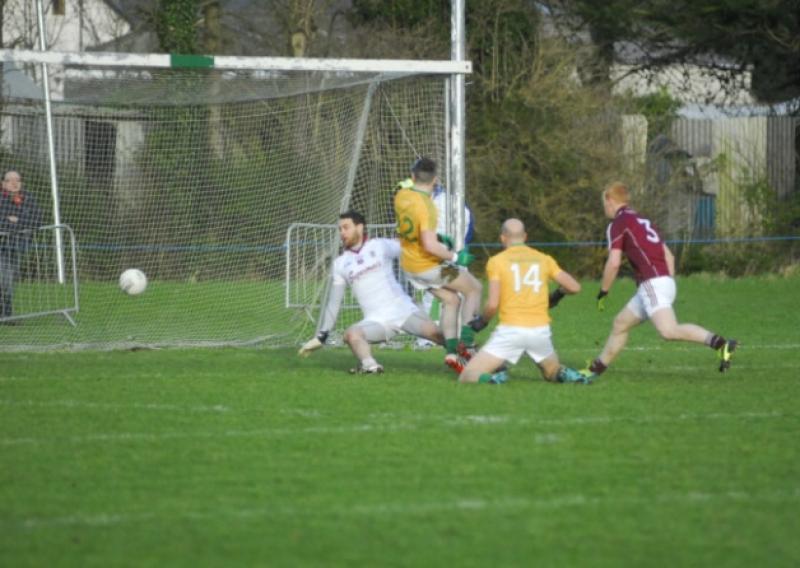 It wasn’t the fairytale ending the crowd in the rededicated Philly McGuinness Park wanted but there are encouraging signs for Leitrim fans after the one point loss to Galway last Sunday.

It wasn’t the fairytale ending the crowd in the rededicated Philly McGuinness Park wanted but there are encouraging signs for Leitrim fans after the one point loss to Galway last Sunday.

Leitrim surrendered the FBD Connacht League title after two years but showed enough spirit and resolve against an impressive Galway to send the 1,500 strong crowd home more than satisfied that new manager Shane Ward might just have Leitrim on the right track.

A stylish and well organised Galway looked as if they would cruise to a comfortable win on a couple of occasions but a defiant Leitrim kept battling away, using their impressive structure and equally impressive fitness to keep them in contention against a Galway team who dominated possession.

It was also an important win for Galway after a clean sweep by Leitrim teams in 2014 and a marker for a possible championship meeting later in the year.

With a dominant base in the middle of the field, Galway bossed possession and almost rued missing a couple of good goal chances, including a penalty, as Leitrim twice fought back from five point deficits to leave just a point in it

Manager Shane Ward was bitterly disappointed afterwards but there was nevertheless a host of positives to take from the game as Eslin’s Ronan Reynolds and Allen Gaels Thomas Mulvey made their Senior team debuts.

Alan McLoughlin made a bright impact on his home ground, one of the few forwards to really trouble the Galway defence while Thomas Mulvey looked very promising before injury prematurely ended his day.

Sub Shane Moran impressively staked a claim to a starting place with a powerful display while Paddy McGowan and James McGrail continue to catch the eye.

Fittingly the opening score of Mohill’s big day fell to a Mohill man when Alan McLoughlin took a pass from James McGrail to score. That came after Leitrim almost goaled when Paddy McGowan’s shot was not dealt with by the keeper and a defender, the ball almost going into the net before hitting the post and rebounding clear.

Points from Patrick Sweeney and Johnny Heaney edged Galway in front before good work from Thomas Mulvey set up McLoughlin for a second point.

Galway’s Gary O’Donnell scored a lovely point from a tight angle, Shane Walsh adding a free before Mulvey marked his debut with a lovely effort with the outside of his boot on 17 minutes.

However, Galway started to take over with Danny Cummins just missing a goal chance and points from Walsh (2), O’Donnell and Cummins before Kevin Conlan put over a free. Martin Coady hit back with a good point to give Galway a 0-9 to 0-4 halftime lead.

Leitrim started the second half in blistering fashion with a huge Sean McWeeney point before Galway sub keeper John Egan caught a floating ball just ahead of James McGrail.

Galway should have found the net when Patrick Sweeney was taken down and a penalty awarded but Shane Walsh incredibly blasted wide, immediately boosting Leitrim who responded with a huge Conlan free.

Sub Shane Moran fisted over after good work from McLoughlin and Fergal Clancy but Galway immediately responded with a fine Martin Coady score into the wind.

And Galway showed their class as Cathal Sweeney and Walsh added points to re-establish the five point lead despite James McGrail again threatening to get on the end of a long ball.

McGrail did connect with a long ball, not to catch it but enough to knock it away from two defenders and into the path of team-mate Alan McLoughlin who brilliantly volleyed the ball first time to the back of the Galway net to set the crowd alight.

Galway immediately responded with a Martin Coady point but Leitrim kept the pressure on with less than ten minutes to go when Ronan Reynolds timed his run perfectly to get on the end of a good move to point.

Incredibly, with more than 10 minutes, there was only to be more score and that came with the very last kick of the game when Kevin Conlan drove a 21 yard free over the bar as he looked for a goal that that would hand Leitrim an unlikely victory.

However, Galway cleverly kept the ball and slowly strangled the life out of the game to end Leitrim’s reign as FBD Insurance Connacht League champions.