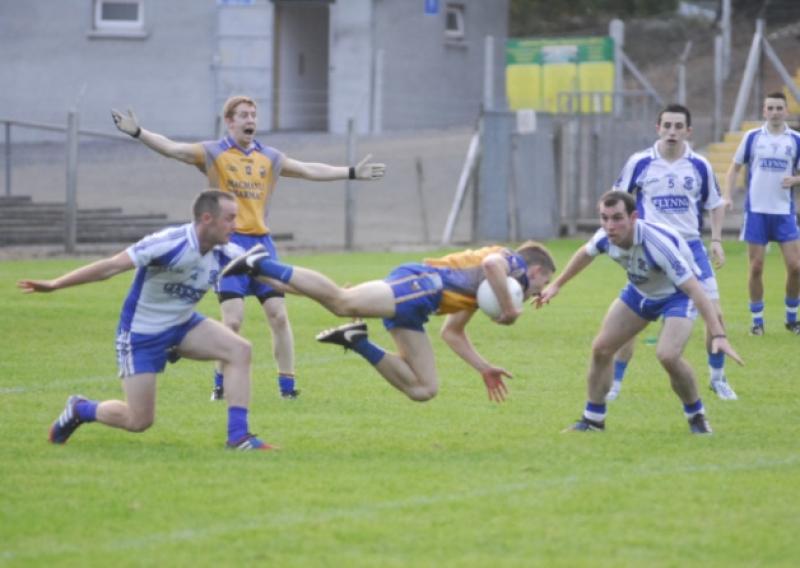 Picking out one turning point in any match is often a fool’s errand but nowhere has there been a more clear-cut game changer than Conor Glancy’s 50th minute penalty save, a game that propelled St. Mary’s Kiltoghert into this year’s Senior Final.

Picking out one turning point in any match is often a fool’s errand but nowhere has there been a more clear-cut game changer than Conor Glancy’s 50th minute penalty save, a game that propelled St. Mary’s Kiltoghert into this year’s Senior Final.

With the scores tied and St. Mary’s struggling under the weight of an impressive Glencar/Manorhamilton fight-back, the north Leitrim men seemed poised to take the lead when they were awarded a penalty just seconds after drawing level.

At that stage, Manor were surging forward in waves and looking the likely winners, particularly with James Glancy’s spot kick to come.

But then Conor Glancy dived full-length and made a fantastic stop, adding value to the save by clearing the ball as St. Mary’s went straight down the field for Micheal McWeeney’s point to regain the lead.

Never has a score transformed a game so starkly as St. Mary’s, who had previously looked leaden footed, were now sprinting with incredible speed, Colm O’Reilly’s poacher’s goal a minute later all but assuring them of a place in the final against Aughawillan.

It was a thrilling end to a thrilling game of high intensity, one that featured a blistering St. Mary’s start and a brilliant Glencar/Manorhamilton fight-back.

With Ray Mulvey & Brian O’Donnell leading the line, Mary’s were unstoppable but then Glencar/Manor, with James Glancy leading the way, started to get a foot-hold in the game, clawing their way back into contention with Adrian Croal also standing out.

In the second half, that fight-back became dominance with Darren & Evan Sweeney, Gerry Hickey and Colin Ryan driving the team forward, the former champions looked like the team with momentum.

But momentum can change quickly and it did with Conor Glancy’s penalty save as St. Mary’s drove it home.

On the balance of play, St. Mary’s were worthy winners as they never allowed Manor to dictate the agenda but it was a close-run thing and it wouldn’t have taken a lot for Glencar/Manor to advance.

One item of note is that St. Mary’s achieved all this without the Lowe brothers, one injured and one out of the country, which emphasises their strength of depth.

Colm O’Reilly opened the scoring after 25 seconds but Glencar/Manor should have goaled when James Glancy saw his shot deflected over the bar by Conor Glancy, Brian O’Donnell replied with a nice point.

The game took its first dramatic turn six minutes in when Daire Farrell’s shot from the right corner dipped under the crossbar with keeper Luke Sheridan stranded. O’Donnell caught the kickout and fed Clement Cunniffe for a point before James Glancy steadied Manor with a point from a very tight angle on eight minutes.

Mary’s were very much in the ascendancy with points from Ray Mulvey (2) and Daire Farrell. James Glancy scored a huge point under pressure for Manor but with the first break in play after 21 minutes of hectic action, Manor might have snatched a goal but the ball went out of play before Adrian Croal blasted over the bar.

Glencar/Manor were moving well with two Croal points, one from distance, before sub Niall Brady saw a shot blocked to leave St. Mary’s 1-6 to 0-5 in front at the halftime break.

The north Leitrim men continued from where they left off but not without a escape when Pat Gilmartin made a last gasp block on an Alan Doherty shot.

Two quick points from Evan Sweeney and Glancy (free) increased the pressure before Colm O’Reilly put over a free to open a three point gap after nine minutes.

With St. Mary’s missing some great chances, Glencar/Manor were growing in confidence with James Glancy firing over a free while St. Mary’s James Glancy made a fantastic flying interception as the ball flew to an unmarked Manor attacker in front of goals.

Niall Brady finished off a length of the field move with a point that could easily have been a goal and after Kieran O’Flynn made an interception, Manor moved the length of the field with Adrian Croal thumping a massive 50 yard score over the bar to tie the scores with 10 minutes to go.

Just seconds later, Glencar/Manor seemed all but in the final when Conor Glancy was penalised for a foot-block on Niall Brady. James Glancy took the kick but the Mary’s keeper made a brilliant diving save.

It got even better for St. Mary’s as O’Donnell, Mulvey and Nicholas McWeeney combined to set up Micheal McWeeney for a huge point in a stunning turn-around. The effect of that score was magnified a minute later when Colm O’Reilly got in behind the defence to fist Daire Farrell’s long ball to the Manor net.

Mary’s could have had another goal but Ray Mulvey lost the ball into the hands of Luke Sheridan but Mary’s were on a run and Mulvey pointed after a De Lacy run before Micheal McWeeney capped off a fantastic closing burst with an injury time point.