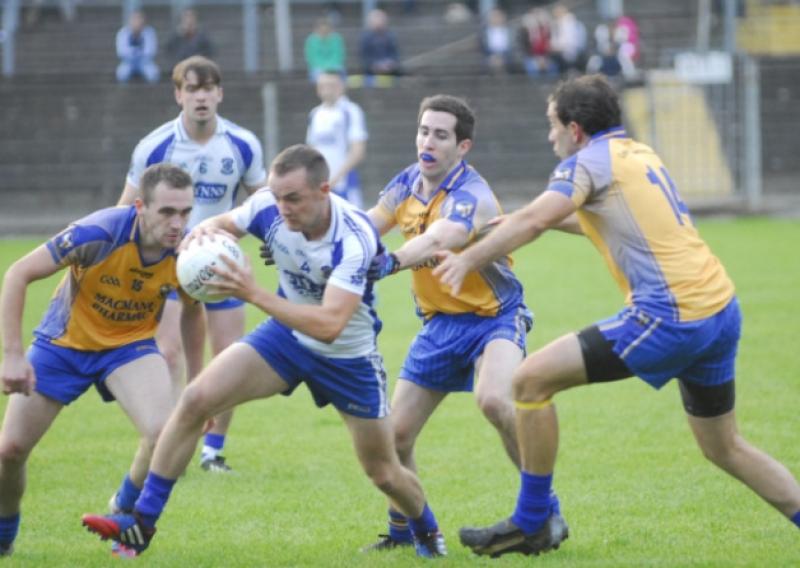 Victorious St Mary’s Kiltoghert manager Thomas Crowe was a proud man as he spoke after seeing his side dump Glencar/Manorhamilton out of the Connacht Gold Senior Championship.

Victorious St Mary’s Kiltoghert manager Thomas Crowe was a proud man as he spoke after seeing his side dump Glencar/Manorhamilton out of the Connacht Gold Senior Championship.

Having struggled in midfield in the quarter final against Drumreilly, St Mary’s were an improved force on Sunday evening and Tomas paid tribute to those operating around the middle.

“The middle of the field was a strong spot for us and we are delighted with that. Daniel (Lowe) pulled out late in the day and it was great when the two lads were able to step in and take it on.”

The significance of Conor Glancy’s penalty save was cemented when Colm O’Reilly scored a crucial goal minutes later and Tomas agreed that was a significant moment in the game.

“That was a minute that changed the game, to go down the other end and put the ball in the net, that was a six point swing and that was what set us up, we were under pressure before that.”

Paying tribute to Glencar/Manor, Thomas said “They are relentless and they came back. They have set the standard in this county for the last 10 or 12 years and we have been pushing them all the time and now we are after getting past them and we are absolutely thrilled.

Looking ahead to the final, Thomas said “We know what Aughawillan are like, they held us to a draw last year, they are a very lively, young team and they won’t be found wanting on the day but we’ll be there for them.”

Glencar/Manorhamilton manager Brendan Drummond felt the goals were crucial in his team’s defeat - “Goals win championship games and at the end of the day, there were two goals. The penalty was a big decision, it didn’t go our way. Maybe if we had scored it, it would have seen us through.

“I don’t know even if it was down to the penalty, on the day, things didn’t go right for us. All year, we’ve been playing games out of the fire when we were a couple of points behind but it just wasn’t our day.

“Fair dues to St. Mary’s, they are worthy to be in the final. I’m very proud of the lads and all they’ve given, they gave 100% today and at the end of the day, Mary’s were the better side and they are in the final.”

Neither did Brendan seek any excuses over the absence of an injured Aaron Hickey - “At the end of the day, it is not down to Aaron Hickey, it is down to the team collective and we got beaten today by a better team.”