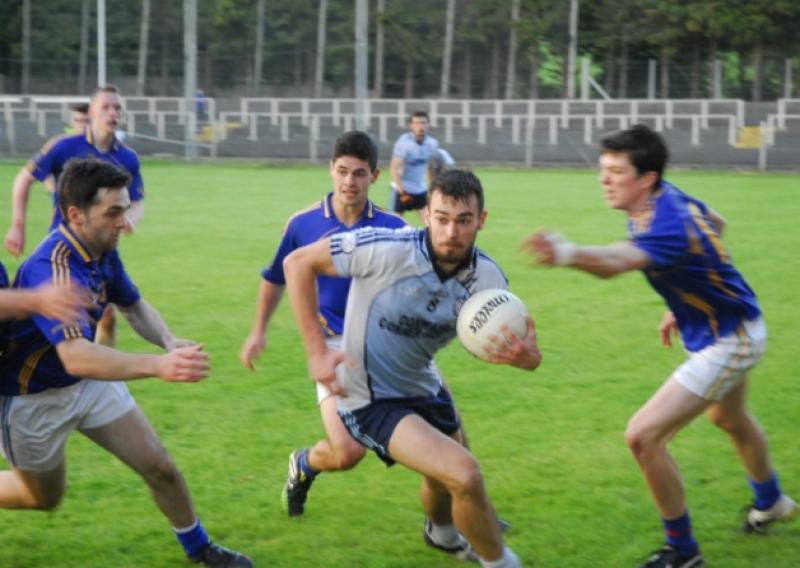 At the end of an exhausting, exhilarating and exciting Semi-Final, Aughawillan showed real title credentials with a ferociously hard fought victory over a battling Allen Gaels last Saturday.

At the end of an exhausting, exhilarating and exciting Semi-Final, Aughawillan showed real title credentials with a ferociously hard fought victory over a battling Allen Gaels last Saturday.

The first Connacht Gold Senior Semi-Final was thoroughly enjoyable with two intensely committed teams going at it hammer and tongs from first whistle to the last but when it came down to it, the superior fitness of Aughawillan saw them outscore Allen Gaels by six points to two in the final quarter to reach the Final.

With Ciaran Gilheaney going into over-drive in that final quarter with five points and Aughawillan players seemingly running as hard at the final whistle as they were at the first, the stubborn resistance of the Gaels was finally breached.

Breaching that resistance took some doing as Allen Gaels produced their best display of the year, playing forceful and inspiring football with quick movement and great attacking play from Brian & Thomas Mulvey and Nicholas Moore.

Midfield saw an impressive showing from Martin Beirne and Alan Wynne, mobile, strong in the tackle and accurate with passes while Dylan McGowan, David Wynne and Adrian Sorohan stood out in a hard working defence.

But as hard as they pressed, probed and tested Aughawillan, the Willies never quite broke and even Allen Gaels two point halftime lead did not seem a good return for an excellent first half display as an incredibly fit Aughawillan dominated the second half.

After the match, Allen Gaels management criticiseddecisions of referee Eamon O’Grady as they conceded a succession of frees late on as the pace of the game and the physical toll began to exact a price on the Gaels.

Some frees, against both teams, could be called harsh but the root of the Gaels problems was in the pressure Aughawillan were putting them under as a Ciaran Gilheaney inspired team finished much, much stronger.

Gilheaney was the cutting edge for Aughawillan but keeper Colin Maguire made two critical saves to prevent goals from Shane Walsh and Thomas Mulvey, his roll at his end just as important.

Mark Plunkett did not get a big score but his ball carrying was vital in Aughawillan’s victory while Sean Flanagan, Sean Fox, Noel Plunkett and Michael Quinn all made huge contributions to the victory.

Aughawillan thoroughly deserved their win but the Gaels more than played their part and depart with heads held high. For the Willies, the future is now for a young and vibrant team and nobody will like facing them in the final.

Allen Gaels set the tone early with a huge score for Nicholas Moore with Morgan Quinn replying from a free.The Drumshanbo men went two up with scores from Thomas & Brian Mulvey but Gary Plunkett turned sharply after a line-ball to score.

Full-back Dylan McGowan made a vital interception to start off a move that ended with Brian Mulvey thumping over from long range but points from Ciaran Gilheaney and Morgan Quinn tied the scores before Gary Plunkett missed a great goal chance when he drilled wide after a great run.

Thomas Mulvey and Gary Plunkett swapped points before a poor clearance led to an Allen Gaels sideline ball, Ryan Higgins and Shane Walsh combined to set up Brian Mulvey for an excllently drilled low shot to the net.

Ciaran Gilheaney pulled back a point from a free to leave Allen Gaels 1-5 to 0-6 in front at the break but scores from Stephen Gilheaney and Gary Plunkett levelled the scores on seven minutes.

Back came Allen Gaels with Colin Maguire making a vital save to deny Thomas Mulvey a goal but a Brian Mulvey free and a brilliant score from the corner from Thomas Mulvey restored the two point advantage for the Drumshanbo men.

Sean Flanagan responded with a score on the run and after a couple of near misses, they drew level and went in front with three unanswered points from Ciaran Gilheaney, two from frees, but Aughawillan had a real escape when Maguire made a tremendous save to deny Shane Walsh a certain goal on 16 minutes.

Nicholas Moore scored from a tight angle but a point apiece from Noel and Mark Plunkett, the first more than a hint of steps, opened up a three point gap in the last five minutes. Two more Gilheaney frees secured the win with a late Brian Muvley free e nding the contest.