Ballinamore show their mettle to see off stiff Ballinaglera challenge 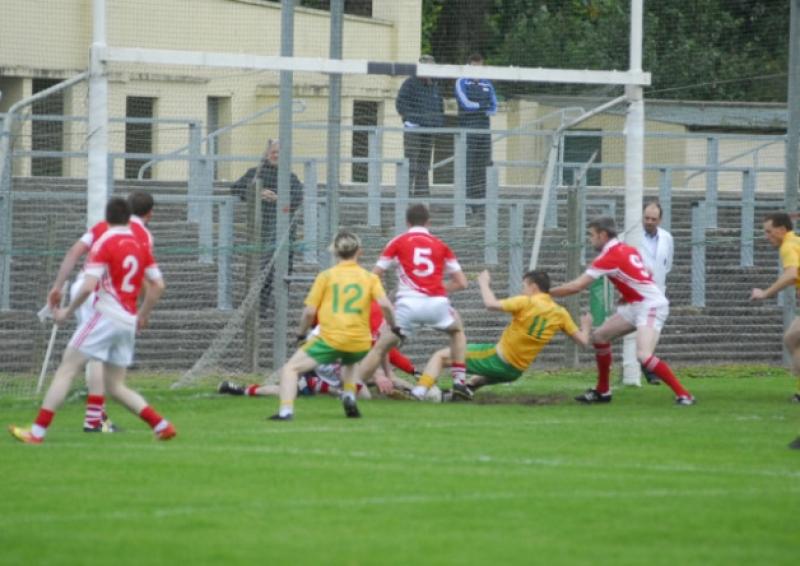 Ballinamore Sean O’Heslin’s secured their place in the Intermediate Championship FInal with, what in the end proved to be a convinving win, but they were made to work hard for their win.

Ballinamore Sean O’Heslin’s secured their place in the Intermediate Championship FInal with, what in the end proved to be a convinving win, but they were made to work hard for their win.

As would be expected in a semi-final, Ballinaglera put it up to their opponents, especially in the second half but as the game progressed it became more evident that without a goal Ballinaglera’s interest in the GWP Intermediate Championship would be coming to an end.

Ballinamore were convincing in front of the posts while in the second half, when the pressure came on their back line, they dealt with the considerable threat posed by Seamie McMorrow and Colm McGuire.

The likes of Luke Murphy, Peter Reynolds and Mark McGrory all impressed for Ballinamore and when he was needed Wayne McKeon came up trumps.

McKeon has had his injury concerns this summer but he gave glimpses of what he is capable of.

Ballinaglera will rue their failure to score a goal but ultimately they lacked sufficient scoring threat to truly trouble the Ballinamore defence. It has to be said that the majority of the Ballinaglera scores were excellent points, while at the other end of the pitch, Ballinamore always seemed able to conjur up a score that bit easier.

The game began with Ballinamore eager to assert themselves on the game and they did just that. After Peter Reynolds’ early free was claimed on the goal lne by Anton McGourty, Ballinamore struck for two quick points with Reynolds (free) and Wayne McKeon both on target.

Ballinaglera’s intent was clear from an early stage, soak up the pressure and when the ball was turned over deliver the ball long towards the full-forward line.

This was a tactic it took Ballinamore some time to get used to and it led to Ballinaglera’s opening score as Colm McGuire’s long delivery was met by Fergal Wynne who pointed and the sides were level in the seventh minute when Ballinaglera struck for their second score.

From the left touchline Seamie McMorrow converted the kind of free that seemed impossible but he made light work of the seemingly impossible angle to score a stunning point.

That didn’t seem to phase Ballinamore and they responded in impressive style as they scored five unanswered points from Wayne McKeon, Andrew Burns (two), Luke Murphy (free) and Peter Reynolds to take control of proceedings.

While Ballinamore were clinical during this stage, Ballinaglera were attempting to make the best of the few opportunities that came their way.

Ballinaglera scored their first point in 15 minutes when Damian McGourty pointed but that was almost immediately cancelled out by a Luke Murphy point.

Ballinaglera finished the half strongly and had a sight of the Ballinaglera goal with five minutes of the half remaining but Colm McGuire’s effort was off target.

Ballinaglera did complete the first half scoring when Seamie McMorrow converted a free to leave Ballinamore leading by double scores at the interval, 0-8 to 0-4.

Having finished the first half impressively Ballinaglera got off to a flying start as they registered the first score of the second half just 25 seconds after the restart.

Seamie McMorrow’s long, seacrhing delivery was aimed in the direction of Colm McGuire but the ball eluded everybody and bounced over the bar.

With Ballinaglera continuing to press, Ballinamore looked nervous and their lead was redued to two points when Seamie McMorrow scored a stunning point from a seemingly impossible angle.

James McWeeney and Fergal Wynne exchanged points meaning there was just two points seperating the sides with a quarter of the game remaining.

The game was delicately poised but Ballinamore always seemed to pose more of a threat with elsuive forwards like McKeon, McGrory, Murphy and Reynolds all causing plenty of problems for the Ballinaglera defence.

Ballinamore finished the game strongly with Mark McGrory and James McWeeney pointing before Fergal Wynne was on traget with another stunning Ballinaglera point.

However, it was to be Ballinamore’s day and victory was secured in the closing stages when Wayne McKeon converted a free to leave four between the sides and in the final minute the gloss was put on the win when Peter Reynolds struck decisively for the game’s opening goal after a perfectly weighted pass from James McWeeney.