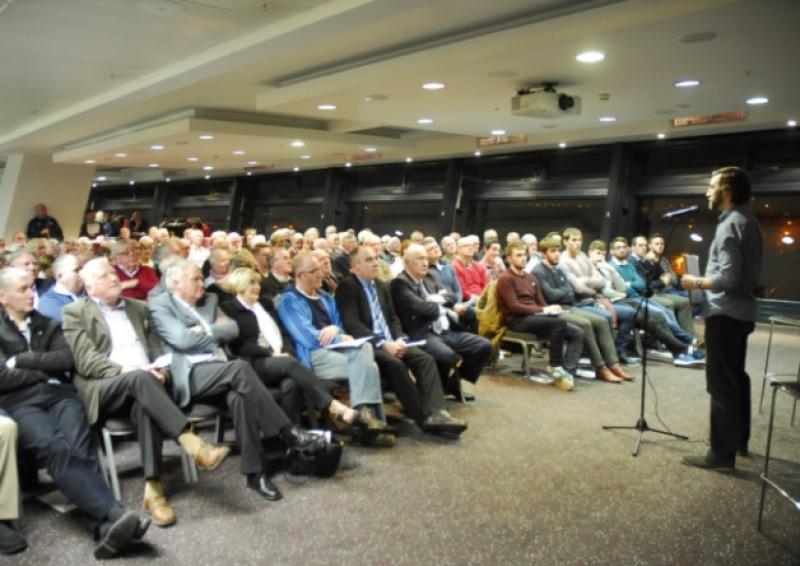 There is no better man in the country at leading the national discourse than Joe Brolly. Politicians across the 32 counties must look at him in awe and wish that their manifestos could command the airwaves and the column inches in the same way that the Derry native’s does.

There is no better man in the country at leading the national discourse than Joe Brolly. Politicians across the 32 counties must look at him in awe and wish that their manifestos could command the airwaves and the column inches in the same way that the Derry native’s does.

The problem is that most of our politicians – with a few exceptions – aren’t as intelligent or as articulate as Brolly.

However, just because Brolly is a supreme debater and communicator doesn’t mean he is always right.

He is pushing Joe Brolly’s opinion, and unfortunately too few broadcasters and journalists question and probe him on where facts and research sit in relation to some of the views he delivers so compulsively and engagingly.

I have a bit of a love hate relationship with The Bespectacled One. I loved it when he came onto the Sunday Game and challenged the one-dimensional, regularly partisan, views usually delivered by Pat Spillane. I enjoyed his nuanced reading of games and the wider landscape and his willingness to challenge the accepted view of the establishment.

However, I’m not a fan when he veers into professional barrister mode – my time spent reporting from the various courts of our country has left me highly sensitive to this superiority complex, one which often resorts to verbal bullying backed up by a gymnastic mastery of language that leaves the poor Joe Soap in the witness box tongue-tied, their thought processes hopelessly contorted and bamboozled.

Surprisingly, Joe also appears to suffer from a condition I did not expect such a bright mind to succumb to: severe nostalgia for the way things were.

The good old days when Joe adorned the Derry jersey (and let’s be honest, he did light it up), when all inter-county footballers were as pure as the driven snow, playing solely for the love of the game without a hint of cynicism, completely unaffected by any single-minded ruthless desire to win.

The reality of the matter is that the football of the 90’s and early noughties was occasionally as awful as today’s, and often just as brilliant too. The same can be said of the 70’s and 80’s eras. Today you are probably less likely to be decapitated mind you. It also contained players and managers who did everything in their power to ensure they won including making incredible personal sacrifices and putting other elements of their lives on hold.

I missed Joe’s initial rant on Newstalk’s radio’s Off the Ball when he predicted the impending doom of the modern game and the inevitable self-destruction of all the poor souls currently playing the inter-county game.

It caused such a stir I listened back to it and I found it largely unfounded and full of hyperbole. He was allowed to throw out incredulous statements without having them challenged, including claiming that players all over the country were ringing him to tell him how the game was currently ruining their lives.

Maybe it’s just me, but I know a good few inter-county players too and I can’t imagine too many of them sifting through the Yellow Pages to find Joe’s 24-7 Hotline and calling up the man to bear their soul to him and air their grievances. I’ve no doubt one or two did but that’s hardly an adequate sample representation of a 2,000 strong cohort.

The other thing I found maddening was that much of Brolly’s statements completely disempowered the players, many of whom are amongst the finest young leaders of their generation.

For Brolly to claim that a generation of players are “drifting from sinecure to sinecure, from scholarship to scholarship….drifting around into sedentary jobs, not able to work full time, unable to build careers” is complete fantasy, excluding a tiny minority.

To my knowledge, the majority of players make a decision to commit to the modern rigours of inter-county competition based on priorities at the current stage of their lives.

What, I wonder, is Brolly’s opinion of the hundreds of thousands of young Irish that have taken gap years over the two decade to travel around the world or through Australia picking fruit?

Are they wasting their potential putting their lives on hold like this or are they following their own dream, their own path?

Jim McGuinness was often dismissed as being an eternal student during his playing days – has taking the long route around done his professional or football career any harm? Me thinks not.

For the most of my 20s Leitrim football was the top priority in my life and I was willing to sacrifice a social life and certain relationships, travel and other interests, and focusing all my energies on my career to pursue what I considered my self-actualisation at that time.

But it goes the other way too – my life as an inter-county player opened up incredible opportunities such as the chance to play ball in Chicago for a summer while I have no doubt it did no harm when it came to getting jobs in both the Irish Voice in Boston or the Donegal News, both big GAA publications.

My experience also showed me how to better harness my potential through dedication and how to subsume personal interest in the pursuit of a collective goal.

Yes at times I over-committed to the game and took things too seriously but I have done the same in other aspects of my life. When I was the editor of the Leitrim Post I spread myself way too thin and the management of the company were much more complicit in that than the Leitrim management team were.

At one stage I spoke to Dessie Dolan and Noel Moran, who was selector, and told them that I needed to step aside as my health was giving out – I was losing weight, under enormous stress, and I felt my form was suffering badly as a result. They told me to take some down-time (from work as well as training) and see how I felt.

It was great advice and as it turned out that summer’s football was the only thing that allowed me deal with the stresses of an under-manned and under-resourced office while operating in a very challenging work environment.

To give Brolly his due he also made some very pertinent points, especially about the win at all costs attitude so prevalent in the modern scene (but one that is also prominent across all sporting codes so the GAA can hardly be held exclusive in that ill).

But that, to borrow a line from Spiderman, doesn’t exclude the GAA from the great responsibility that comes with its position of great power and influence it exerts on the Irish psyche and culture.

And again in fairness to Brolly, while the radio interview ran a little wild on the accusation front he penned a column in the Irish News a week or so later (complete with some supporting research) that distilled his argument exceptionally well and was one of the best articles I have read on the topic.

It still contained ample examples of Mr Brolly’s tendency to aggrandise to make a point, but it also reveals that the Derry man has a lucid mind that brings forth many worthy arguments and insights. It’s just important that they are better challenged rather than always taken as the Gospel According to St. Joseph.