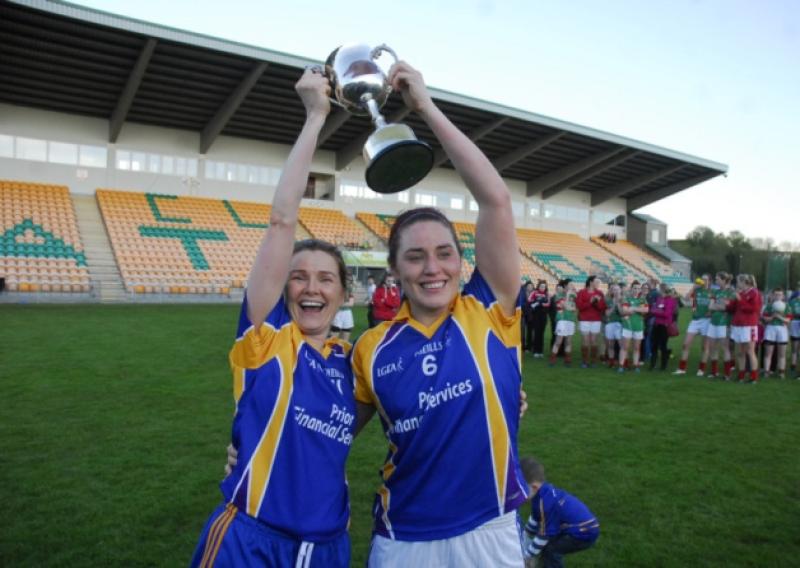 Aughawillan regained the Ladies Division One crown last Friday evening when their finishing power proved too much for Kiltubrid.

Aughawillan regained the Ladies Division One crown last Friday evening when their finishing power proved too much for Kiltubrid.

With only two points between the sides at halftime, this was a much closer game than the scoreline suggests but Aughawillan’s power, both in terms of finishing and strength all around the field, told its tale in the end.

Kiltubrid started strongly with County star Aine Tighe running straight through the Aughawillian defence to register the first point of the game inside the opening 30 seconds.

And Kiltubrid were keen to make the most of the Tighe sisters in the middle of the park, the support play of their team-mates crucial as Aine and Niamh burst through from the middle of the field to score two more points.

Aughawillan were under pressure to keep Kiltubrid out but their shooting boots were missing as Aileen Maguire put a 45 the wrong side of the post while Aughawillan had two chances for goals but Kiltubrid’s Lousie Moolick made two very good saves.

Kiltubrid dominated the first 10 minutes but once County star Aileen Maguire registered their first point, Aughawillan settled and Maguire quickly added another point within two minutes from a free.

That provoked a strong response from Kiltubrid, Carol Keany pointing before Aine Tighe slotted home a penalty on 19 minutes to leave her side 1-5 to 0-2 ahead.

Cavan star Grainne McGlade and Aileen Maguire both added points as suddenly Aughawillan held a 1-7 to 1-5 halftime lead in an amazing turnaround.

Despite Aughawillan dominating the last 10 minutes of the first half, Kiltubrid were not ready to let go just yet and Aine Tighe took control of the opening minutes of the second half by pointing to leave a point between the sides.

But Aughawillan were not to be denied and Maguire pounced for a second goal after just a minute before two Aine Tighe points, on six and 12 minutes, reduced the gap once more to just two points.

However, Aughawillan’s forwards began to show what they are made of when Grainne McGlade and Carla Le Quinn, Caoimhe Gaffney began to take their scores. The ever accurate Maguire tagged on two more points for the winners, to take her total to 2-4 for the game.

Kiltubrid’s Aine Tighe fired over one more point, taking her individual tally to 1-6, but in the end, Aughawillan’s combination of youth and experience proved too potent a combination for Kiltubrid.