Glencar/Manor send out warning as Carrigallen head for playoffs 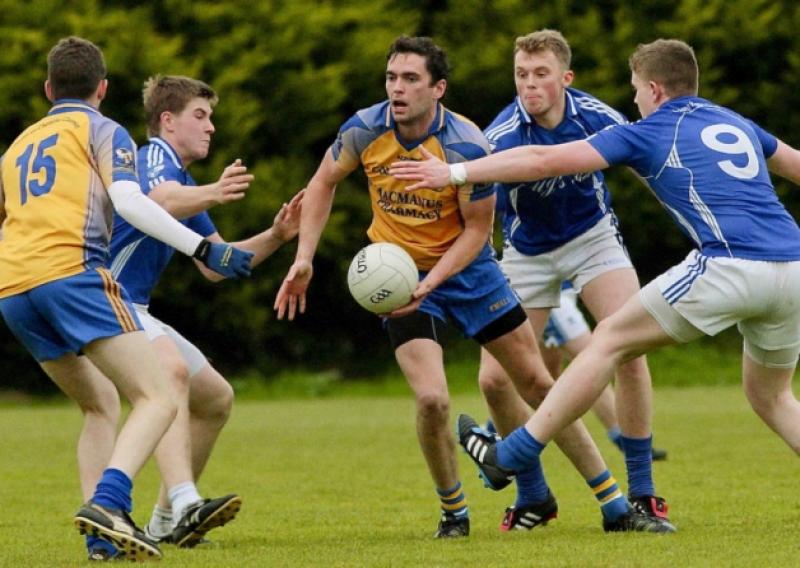 In Saturday evening’s final Group 2 Leitrim senior football championship game that was played in Shane McGettigan Park Drumshanbo, Carrigallen proved to be no match for a rampant and undefeated Glencar/Manor outfit.

In Saturday evening’s final Group 2 Leitrim senior football championship game that was played in Shane McGettigan Park Drumshanbo, Carrigallen proved to be no match for a rampant and undefeated Glencar/Manor outfit.

In what was nearly a non-contest, the Carrigallen men trailed by eight points at halftime and at the end Glencar/Manor had stretched that lead to massive seventeen point margin.

Glencar/Manor grabbed a two points lead in the opening seven minutes after Darren Sweeney and Adrian Croal shot over from play. Derek Reilly halved the Glencar/Manor advantage when he put over a 12th minute Carrigallen free.

Carrigallen’s Gary Reilly was the recipient of a yellow card three minutes later while Ronan Flynn restored Glencar/Manor’s two point lead when he hit the target from a free within the space of another minute after Conor Dolan was fouled.

An 18th minute Derek Reilly Carrigallen point from play reduced to the minimum Glencar/Manor’s lead. But the north Leitrim side took a decisive grip on the proceedings over the next seven minutes when they hit 1-4 without reply.

In this period, Niall Brady, Adrian Croal and Darren Sweeney stretched Glencar/Manor’s lead with a point each from play while James Glancy then finished a defence splitting move to the Carrigallen net with Croal following on by adding another point to his tally.

When Gerard Percival and Tiernan O’Rourke answered with 27th and 29th minute Carrigallen points they managed to reduce the gap with Glencar/Manor to six points at that stage.

However before the break James Glancy whipped over two points on the trot to put Glencar/Manor into 1-9 to 0-4 halftime lead.

The opening two minutes of the second half proved disastrous for Carrigallen when Adrian Croal soloed through almost unchallenged and fired to the South Leitrim side’s net and added a point from play shortly afterwards.

Derek Reilly replied with a 35th minute pointed Carrigallen free. But the north Leitrim men surged further ahead over the next two minutes with pointed frees by Conor Dolan and Ronan Flynn while between Dolan and Flynn’s scores Adrian Croal also fisted over a point.

By the 42nd minute Carrigallen in response hit back with a Gary Reynolds point when the county man flicked over an Enda Lyons hit ‘45’ as well as a point from play by Derek Reilly.

Over the next 13 minutes Glencar/Manor stretched their lead from a whopping 18 points as the Carrigallen men in this period failed to raise a flag of any description.

Conor Dolan put over two frees for Manor with Croal hitting over a point from play while Ronan Flynn hammered home his side’s third goal and also added a point.

Before the end Gary Reynolds replied with a 56th minute consolation point for Carrigallen. In the closing stages, Glencar/Manor’s Conor Dolan received a black card and was replaced by Evan Sweeney and also Killian McGriskin was yellow carded.