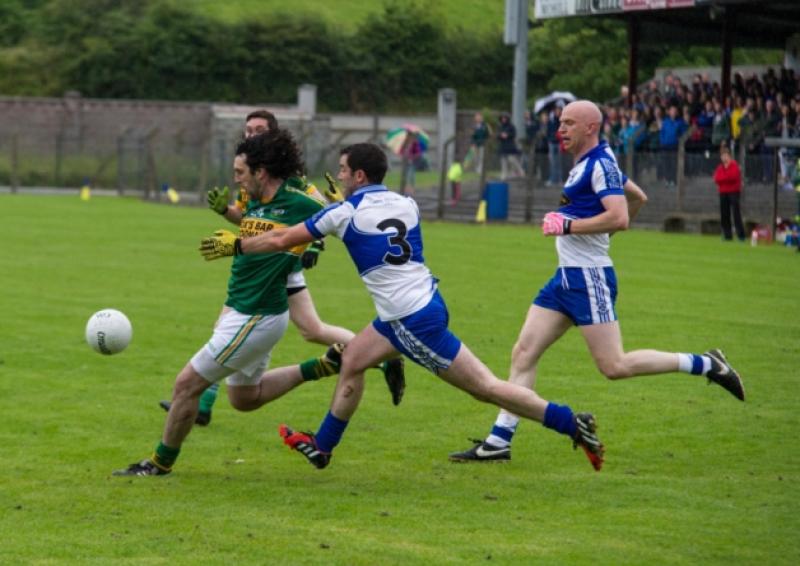 Gortletteragh came out on top by a single point in this close exciting Senior Championship game played in Cloone on Saturday evening last.

Gortletteragh came out on top by a single point in this close exciting Senior Championship game played in Cloone on Saturday evening last.

The victory meant that Gortletteragh, who went into the game trying to squeeze into the last eight, topped the group after Annaduff lost to Dromahair and will go into the quarter-finals in an excellent frame of mind.

Although St. Mary’s still took the automatic second place to qualify for the knock-out stages, alarm bells must be ringing loudly in the Carrick camp. Operating for the first time at almost full-strength, Mary’s have not convinced at all in the group stages and they must be worried by their form.

Both teams employed the big full forward tactic from the start with St Mary’s James McGrail and Gortletteragh’s Cathal Quinn planted on the edge of the square.

Quinn’s presence had an immediate effect when a high ball launched by Cathal McCrann bounced over the bar after two minutes.

A minute later Conor Reynolds pointed for Gortletteragh after Quinn broke down another high ball. After 12 minutes St Mary’s opened their account with a point from Daniel Lowe.

Midfielder Ciaran Egan scored a tremendous point for Gortletteragh from way out the field but a good point from Colm O’Reilly from play and a free from James McGrail levelled the scores at 0-4 each.

As the rain started to pour down County minor Jack Heslin got in behind the defence but his rocket crashed back off the crossbar and from the ensuing play Gortletteragh won a free which McCrann pointed. James McGrail then scored a free to leave it level at half time.

St Mary’s hit the ground running after the restart and Colm O’Reilly pointed a free when James McGrail was fouled.

Gortletteragh’s 6ft 6” tall goal-keeper Conan Clarke then made a great save from Conor Farrell. Indeed he also saved two certain points that were creeping over the crossbar during the game and how important those saves were when the final scores were counted.

County goalkeeper Cathal McCrann was causing problems for St Mary’s around the midfield area and he levelled the score again from a free after he was fouled.

The town team then took control all over the field and two points from Jack DeLacey and Brian O’Donnell followed by an inspirational point from big midfielder Clement Cunniffe put them three points up and Gortletteragh were in trouble.

Colm Duffy and Jack Heslin scored two points for Gortletteragh around the 55 minute mark but St Mary’s steadied the ship with a free from Brian O’Donnell. With 60 minutes gone Michael McWeeney had a chance to clinch the game off when he got through on goal but his shot went wide.

As time was running out Gortletteragh surged forward led by Niall Woods in search of scores and two great scores from the inspirational McCrann, one from a free and one from play levelled the game once again with a minute to go.

Just when it looked like the game would end up in stalemate McCrann got a chance to win the day when Ciaran Egan was fouled and he made no mistake with the pressure free.

St Mary’s drove forward looking for an equaliser but it was all to no avail as referee James McCaffrey blew the final whistle.

Both teams proceed into the quarter final draw where they will be a handful for whoever they are drawn against.