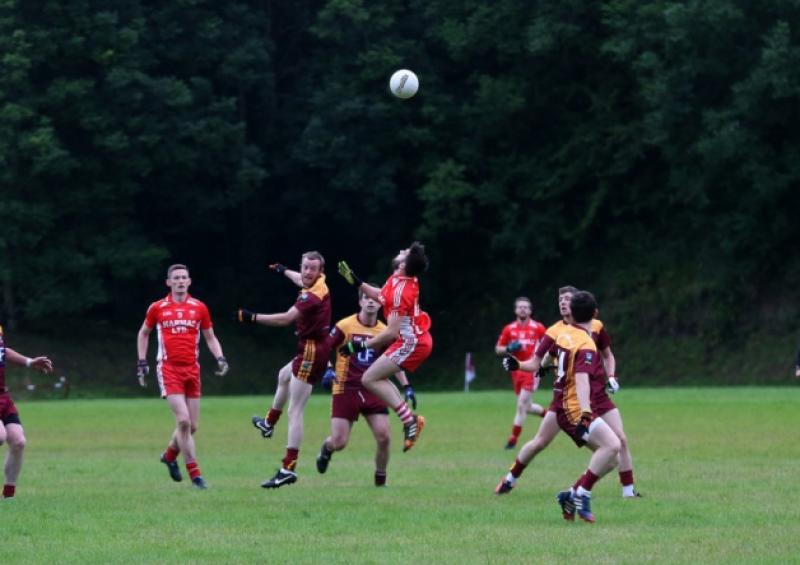 Dromahair gave a glimpse of why many tipped them as dark horses in this year’s Connacht Gold Senior Championship on Saturday evening last against Annaduff but it proved to be a case of too little too late.

Dromahair gave a glimpse of why many tipped them as dark horses in this year’s Connacht Gold Senior Championship on Saturday evening last against Annaduff but it proved to be a case of too little too late.

Unfortunately the game was overshadowed by an injury sustained by Cian Clinton in the closing stages of the game for which James Cox was given his marching orders.

Despite Saturday evening’s defeat, Annaduff advance to the last eight of the competition but they will know they will need an improved performance if they are to go any further.

Playing with a strong wind at their backs as the game got underway, Dromahair looked determined to assert themselves on the game from the throw-in and they opened the scoring with a Robbie Cunningham point within a minute of the start.

It was to get even better from a Dromahair point of view less than a minute later when Cian Clinton shot from distance. Annaduff goalkeeper, Kevin Ludlow won’t look back on the score with any fondness as he saw the ball squirm through his hands and into the goal.

Points from Paddy McGowan and Kevin Conlan (free) further extended the Dromahair advantage before Annaduff gave their first glimpse of their ability as an attacking force.

Sean McNabola realeased Joe Cox who unleashed a powerful shot which Stephen O’Hara did well to tip over his crossbar.

Sean McNabola reduced the deficit further when he converted a free after a foul on Mattie Cox but midway through the second half Dromahair struck for their second goal.

John Evans released Robbie Cunningham who found himself in acres of space behind the Annaduff defence. As Kevin Ludlow advanced to narrow the angle Cunningham slipped but he had so much time he was able to regain his footing before dispatching the ball to the goal.

Dromahair seemed to be bossing matters all over the pitch, particulary in midfield where Annaduff struggled to deal with the variety of kickouts offered by Stephen O’Hara.

However, just when it seemed that Dromahair were in complete control, Annaduff hit back with a goal of their own.

Joe Cox was on the receiving end of a perfect delivery behind the Dromahair defence and he applied a clinical finish to the Dromahair net to reignite the Annaduff challenge.

With 10 minutes of the half remaining the deficit was reduced to a solitary goal when Joe Cox converted a free but Dromahair were to hit back immediately with a Cian Clinton point after Michael Clancy had been allowed to claim the kickout unopposed.

Sean McNabola hit back with another Annaduff point but that would prove to be his last significant contribution as he was issued with a black card with two minutes of the half remaining.

Dromahair, who registered seven first wides, completed the first half scoring with a fine point from distance from the boot of Robbie Cunningham after Jamie Conlon’s pass.

Trailing 2-5 to 1-4 as the second half got underway Annaduff would have been well aware that with the advantage of the wind at their backs they were still very much in contention.

Joe Cox opened the second half scoring with a converted free but less than four minutes after the restart Dromahair struck for their third goal when they were awarded a penalty. Kevin Conlan’s pass found Gary Fowley and as he was readying himself to shoot he was hauled down by James Cox.

Conlan duly dispatched the resulting penalty to the Annaduff goal and immediately afterwards James Cox was issued with a yellow card for his part in an incident that saw Cian Clinton knocked to the ground as the penalty was about to be taken.

Although there was now two goals seperating the sides, the contest was still very much alive and Annaduff hit back just two minutes later with their second goal of the game.

Frank McNabola was on hand after the Dromahair defence failed to deal with a dangerous delivery and his first time finish went past Stephen O’Hara and into the Dromahair goal.

Despite the strong wind they were playing into Dromahair replied impressively with three points in succession. Gary Fowley’s excellent score from a wide position was followed by two Kevin Conlan points.

Although there was still 15 minutes remaining Dromahair now looked in control of the contest as they looked to register their first win at this level after gaining promotion from the Intermediate Championship last year.

Joe Cox converted a free with 10 minutes remaining to leave five points between the sides but Dromahair replied with converted frees from Cian Clinton and Kevin Conlan.

Joe Cox converted an injury time free for Annaduff but it was Dromaahir who were to claim a deserved victory. Although victorious, Dromahair now enter the relegation play-offs while Annaduff take their place in the quarter finals.