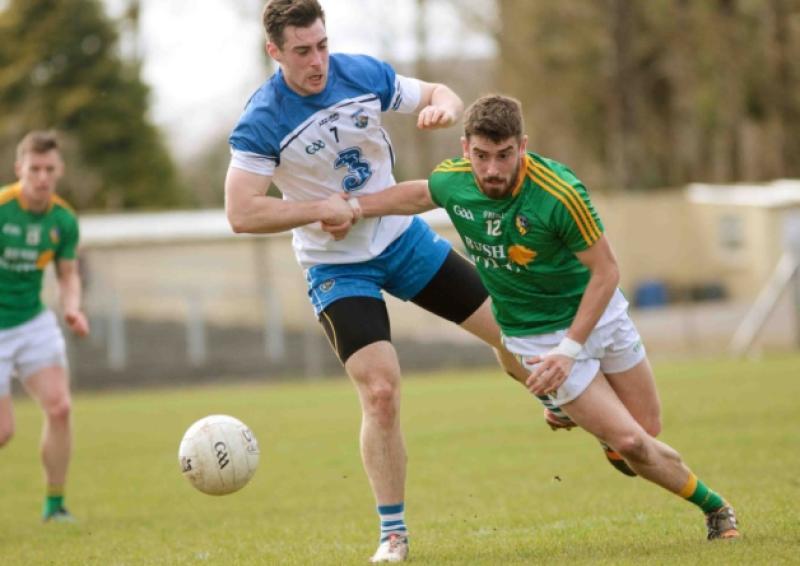 A dominant first half performance over Waterford in Pairc Sean MacDiarmada last Saturday was enough to set Leitrim up for a third successive victory and helped them finish their Division 4 campaign on a positive note.

A dominant first half performance over Waterford in Pairc Sean MacDiarmada last Saturday was enough to set Leitrim up for a third successive victory and helped them finish their Division 4 campaign on a positive note.

Seven different scorers were on target for Leitrim during the opening 35 minutes as Leitrim bossed matters around the pitch and it is no exaggeration to say the half time lead could have been greater than the nine point advantage they enjoyed.

The midfield pairing of Paddy McGowan and Shane Moran were dominant in midfield while the half forward line of Danny Beck, Fergal Clancy and Kevin Conlan were instrumental in establishing Leitrim’s foothold in the game.

Perhaps the player who best illustrated the effort put in by the Leitrim team was James McGrail who was as often found trying to win possession in a deep position as he was tormenting the Waterford defence from full-forward.

To give an example of Leitrim’s first half dominance, the game was almost 32 minutes old before Waterford registered their first point from play.

The second half wasn’t quite as straight forward but despite the pressure they exerted Waterford’s best chance of scoring always appeared to be from deadballs with JJ Hutchinson giving a masterclass in free taking.

The game began with Leitrim signalling their intent straight from the throw-in which Paddy McGowan won with ease and the same player scored the first point of the afternoon in the fourth minute after a well-timed pass from James McGrail.

With Waterford struggling to assert themselves on the game Leitrim extended their lead with two Ronan Kennedy points, the second after a wonderful pass from Sean McWeeney.

The margin was increased to four in the 12th minute but only for the heroics of Waterford goalkeeper Stephen Enright that would have been greater as he did brilliantly to deflect a James MCGrail shot over his bar.

A Kevin Conlan free and an excellent Shane Moran point saw Leitrim march further clear and memories of the start Leitrim made against Wicklow, when they raced into a nine point lead only to be narrowly defeated came racing back.

However, on this occasion there was rarely any cause for fear as even when Waterford did improve in the second half they rarely looked like scoring enough to complete an unlikely comeback.

The Munster men opened their account in the 17th minute when the deadly accurate JJ Hutchinson converted a free but they were unable to build any momentum as Leitrim continued to press very high up the pitch and they replied with points from Gary Reynolds and a Kevin Conlan free.

Another Hutchinson free kept Waterford’s interest in the tie alive, but only just as Leitrim then registered three further unanswered points from Conlan (two, one free) and team captain Sean McWeeney who led by example with a brilliantly executed score.

Leitrim did have one moment of concern when Lorcan O Corraoin got on the end of a Patrick Hurney delivery but Cathal McCrann was on hand to ensure his goal remained intact.

O Corraoin registered Waterford’s first score from play with two minutes of the half remaining but it was Waterford who completed the first half scoring when Conlan pointed after a pass from fellow Dromahair man Paddy McGowan meaning the home side led 0-12 to 0-3 at the interval.

Waterford introduced the imposing figure of Tommy Prendergast for the second half and he played a significant role in Waterford’s revival as he brought some much needed physicality and composure to the Waterford midfield.

Two JJ Hutchinson frees, either side of a fine Mark Ferncombe point which came about after good play involving Hutchinson and Patrick Hurney gave the slightest hint that the game may not be quite over.

Leitrim on the other hand were still creating chances but the decision making and execution wasn’t as clinical as it has been in the opening half and they saw four efforts fly harmlessly wide before Shane Moran opened Leitrim’s second half account, nine minutes after the restart.

Conlan and Hutchinson then exchanged converted frees but there was very much an end of campaign feel about the closing quarter of the game.

Hutchinson added another pointed free to his side’s tally before Leitrim ended a 10 minute period in which they only had more wides to show for their efforts with a perfectly struck point from corner back Niall Woods, who may have been getting frustrated seeing his colleagues further up the pitch spurning several opportunities.

That would prove to be Leitrim’s final score of the game but Waterford and in particular JJ Hutchinson were not yet finished and he scored two late frees but this did little more than add a touch of respectability to the scoreline.