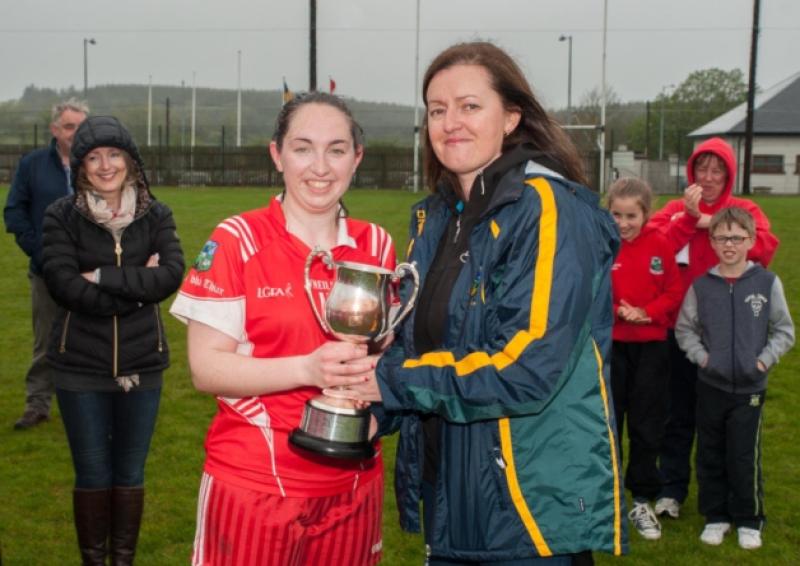 Wet windy conditions in Leitrim village meant less than ideal playing conditions as Glencar/Manor sought to regain their Division One status ahead of the Championship.

In a tight and physical first half, Sharon Kelly opened the scoring for Dromahair with a point from play on a run from midfield before Joice Cunningham pointed from a free.

Manor responded swiftly from the boot of Liadh Broughton and went in front with two well taken frees from Ailbhe Clancy and a fine point from play by Siobhan Feely.

With nothing between the teams, a Dromahair defensive lapse saw Mary Poinard hammer home after a misplaced hand pass.

With Glencar/Manor dominating the next 15 minutes of play, Dromahair struggled to get out of their own half. Manor piled on the pressure but found Dromahair keeper Niamh Kelly in inspired form as she made three one-on-one goal chances to the roars of a large Dromahair following.

Against the run of play, Dromahair’s Joice Cunningham raised the green flag after Erin Farrell & Edel Kelly combined to drive out of defense. Manor didn’t blink, they travelled straight down the pitch and raised their own green flag courtesy of Ailbhe Clancy without a Dromahair player getting a touch on the ball!

Within 10 seconds Manor’s Natasha McEnroy missed an open goal when her shot sped narrowly wide. Natasha went on to score a point from play but Joice Cunningham and Sharon Kelly both missed opportunities just before halftime leaving Glencar/Manor 2-5 to 1-6 ahead at the break.

With referee Jimmy Stenson awarding 26 frees in the second half, it was a testament to the tight marking and forced errors of over carrying of both teams in a hugely competitive encounter.

Dromahair wasted several opportunities in the opening 10 minutes that saw Manor pin Dromahair into their own half with Ailbhe Clancy, Siobhan Feely and Mary Poinard keeping Mary & Emer Clancy on their toes and relying heavily on the experience of Mairead McMorrow at centre back for Dromahair.

Siobhan Feely took her goal on the ninth minute from out on the right wing followed by two well taken frees from Ailbhe Clancy to put Manor six points up, which didn’t accurately reflect their dominance at this stage.

And Dromahair made them pay for their misses with a late surge, aided by the fresh legs of Joanne Feeney on for an injured Aoife McTernan, saw a four goal blitz from the underdogs.

With Abhainn Ballantine winning the high balls raining in on the Manor goal, Joice Cunningham hit the net on the 52nd and 56th minute giving her a hat trick and leaving the game level with four minutes left.

Abhainn Ballantine took her own goal under pressure on the 58th minute leaving the Manor girls reeling. With almost no time left Manor mounted one final attack to no avail. Dromahair captain Sharon Kelly drove at Manor’s defence before her 50 yard shot went over the head of keeper Dympna Boylan who was just off her line to secure a remarkable victory.