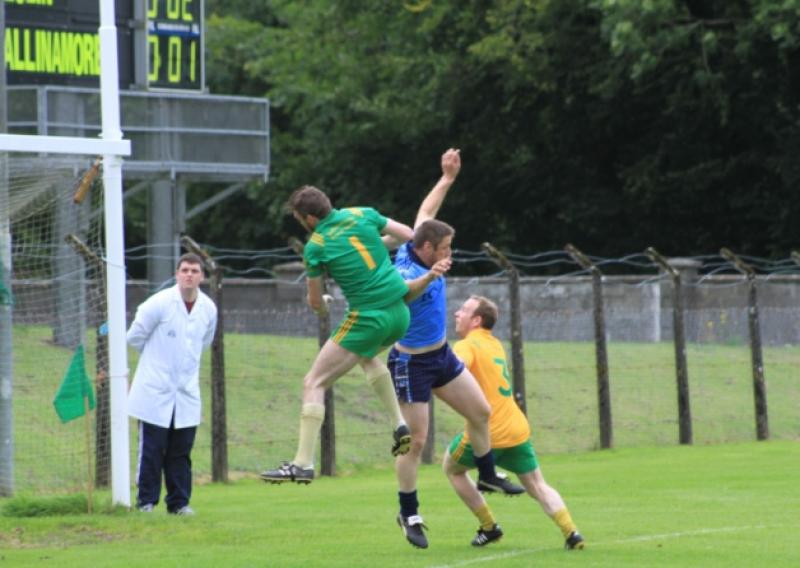 It is a cliche but it is also true, a draw was the fairest result in Cloone last Saturday but it was Eslin who may have felt aggrieved.

It is a cliche but it is also true, a draw was the fairest result in Cloone last Saturday but it was Eslin who may have felt aggrieved.

Midway through the second half, Eslin led by four points and looked in control but a ferocious fight-back by Ballinamore Sean O’Heslin’s saw them take the lead only for Brian Higgins to snatch a levelling point.

The major talking point after an enthralling game was the non-award of what looked like, to this writer at least, a cast iron penalty for a foul on Conor Beirne in added time at the end of the first half.

A high ball found Conor Beirne alone behind the defence but keeper Philip Farrelly jumped out for the ball, colliding heavily with an airborne Beirne as the ball deflected out off the Eslin man.

With Eslin appealing for, and nearly everyone in Cloone expecting, a spot-kick, referee James McCaffrey consulted with his umpires before awarding a fifty.

The decision certainly infuriated Eslin and it might have actually inspired them as, just after halftime, Conor Beirne pounced for 1-1 and Eslin drove into a four point lead and they dominated around the middle of the park.

But credit Ballinamore, they dug in and made a few positional switches and they worked and for the last quarter, they looked like the team most likely to win. Moving Liam Ferguson further out the field gave them the impetus they needed but it was switching Shane Moran to full-forward that changed the game.

The County man was the driving force for O’Heslin’s for much of the game but he really took off at full-forward, scoring three points as he exploited the space in the Eslin backline. And it was Moran who very nearly got the Ballinamore men across the line.

It might be easy to categorise this as a missed opportunity for Eslin but you get the feeling that they are capable of playing so much better. Conor Beirne was a handful but the supply to him was often wild and atrocious and he did well to make the impact he did.

What will please Eslin was the contribution of younger players like Eamon, Joseph and Jamie Stenson while Ronan & Conor Reynolds also did well. Centre-back Eamon Stenson looked very impressive but there is more to come from Eslin if they can get the right supply of ball to Beirne.

For O’Heslin’s, the pressure is on as they will be expected to finish the job in the replay. Niall & Dean McGovern were impressive for the town team while playing David Duignan in front of defence paid off for them.

Ballinamore will feel they can improve but they will need a greater return from their forwards if they are to prevail.