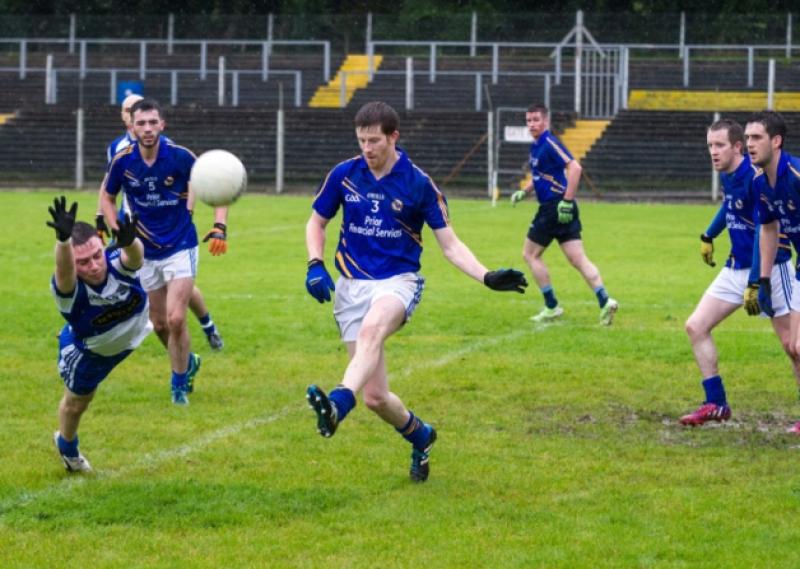 It certainly wasn’t the most impressive display from the defending champions as they were forced to play second fiddle to the Carrick men for long periods, particularly during the second half.

It certainly wasn’t the most impressive display from the defending champions as they were forced to play second fiddle to the Carrick men for long periods, particularly during the second half.

But when the pressure was at it’s greatest, it was then that Aughawillan showed their championship mettle as they rattled off five unanswered points in the last ten minutes to claim a convincing five point win and a place in the semi-finals against Glencar/Manorhamilton.

Sean Pierson’s side bent under the pressure the Carrick men put them under, particularly with James McGrail dominating in the middle of the park. But they never broke, keeping themselves in contention with a clinical accuracy that St. Mary’s could only envy.

The Carrick men must be wondering how they left this game behind them - they started by far the better of the two teams but had three wides and in virtually their first attack, Mark Plunkett swept a long range point over the bar in the greatest contrast between the two teams.

It was that greater efficiency in front of the post that proved crucial - Aughawillan were always able to stay in touch despite McGrail, Daniel Lowe and Clement Cunniffe dominating the breaking ball as St. Mary’s were let down by their finishing from play and placed balls.

Aughawillan’s defensive efforts also stood out as they managed to get enough players back to stop Mary’s building up a head of steam and in Morgan Quinn, they had a player displaying the sort of accuracy that wins tight games in awful conditions.

You’d also have to credit the fitness and belief in the Aughawillan camp - in the last ten minutes, the champions simply had too much pace, power and fitness in the key battles as they ran into space and had the legs to find gaps that previously had not existed in the contest.

St. Mary’s dominated the opening 10 minutes but had three wides from James McGrail (2) and Michael McWeeney and Aughawillan showed them how to do it when Mark Plunkett, in splendid isolation, swept over a fine point on 10 minutes.

Fergal McTague had a wide but the Carrick men got themselves back in the game was a high ball was knocked down to Daniel Lowe who fed an unmarked Alan Doherty for a fisted goal from close range on 13 minutes.

St. Mary’s continued to miss chances, McGrail seeing a free hit the post while Gary Plunkett had a bad wide at the other end. Ciaran Gilheany put over a free for a far more efficient Aughawillan and the champions levelled when Sean Flanagan showed great persistence as he dodged through a couple of defenders before firing over.

Keeper Conor Glancy made a good catch from a long range Morgan Quinn free while St. Mary’s had four wides before the break, James McGrail eventually pointing from a fifty after his first 50 was deflected out.

That left the halftime score at 1-2 to 0-4 for St. Mary’s, a lead they quickly extended when McGrail converted a free from out in the right corner. But Aughawillan responded immediately when Morgan Quinn dropped a massive 50 yard free just over the bar almost immediately.

Sean Flanagan was then yellow carded for a foul on Robbie Lowe but St. Mary’s were not converting their chances, McGrail missing two frees and they paid for it with Morgan Quinn putting over another free to tie the scores on seven minutes.

Jack De Lacy had a wide before James McGrail hit a poor snap-shot, keeper Colin Maguire saving the ball but was forced out of bounds with McGrail converting the resulting fifty. That put Mary’s one up but incredibly, that was to be their last score of the game.

Aughawillan weren’t particularly convincing, Ciaran Gilheany seeing a free drop into a defender’s hands on the line while Sean Flanagan put a free short. However, with ten minutes to go, an off-the-ball found on the edge of the square allowed Morgan Quinn convert to tie the scores.

You could sense the belief growing in the Aughawillan ranks and when Morgan Quinn scored his fifth point of the game, the champions showed their true colours as they started to win all the key battles and swept forward at every opportunity.

Mark Plunkett notched his second after a well worked move before a brilliant Gilheany free from the corner left three points between the teams. St. Mary’s needed a goal but they couldn’t get the ball and a break out of defence involving Pearse Dolan and Sean Quinn ended with sub Shane Flanagan thumping the ball over the bar from 40 yards.

That put Aughawillan four clear and it was game over, particularly when Gilheany scored a brilliant point from the corner. Mary’s never gave up, Alan Doherty seeing a shot saved on the line but it was not near enough to trouble the champions.