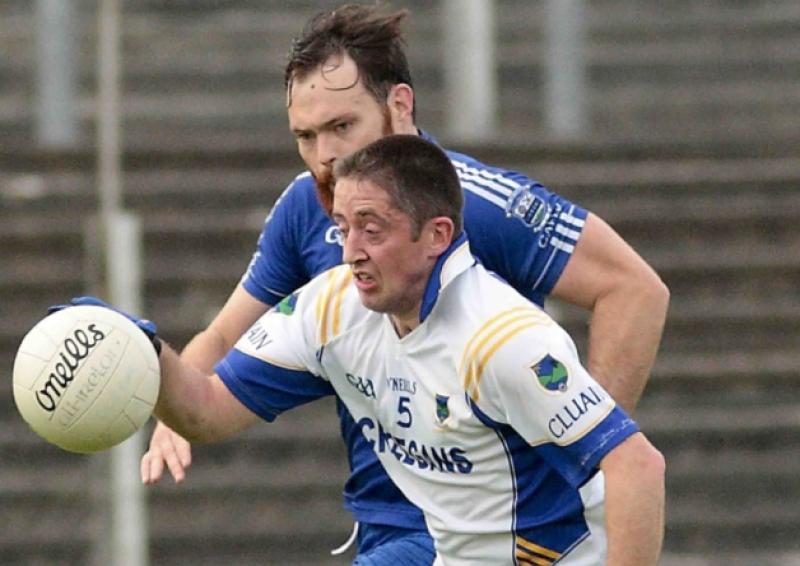 Melvin Gaels’ bid to make an immediate return to senior championship football continued on Saturday evening last when they saw off the challenge of Cloone in Pairc Sean MacDiarmada.

Melvin Gaels’ bid to make an immediate return to senior championship football continued on Saturday evening last when they saw off the challenge of Cloone in Pairc Sean MacDiarmada.

Melvin Gaels had a relatively straight forward route to the quarter-finals but would have been concious of the fact that they struggled to produce a performance of real intensity for two halves in their opening three games.

On Saturday they looked to put that right as they bossed matters straight from the throw-in and had effectively made sure of victory inside the opening quarter as they raced into a seven point lead.

From a Cloone point of view the result will be bitterly disappointing but even more so will be the manner of the defeat. The game was 39 minutes old before they scored their first point from play, a stark contrast from the impressive performance that saw them defeat Glenfarne/Kiltyclogher in the eighth place play-off a week earlier.

The midfield pairing of Jesse McGuinness and Peter McGowan dominated matters in the early stages with the assistance offered by David McSharry and Fabian McMorrow nullifying any threat offered by Cloone in the midfield sector was cancelled out.

The game was less than two minutes old when David McSharry struck for the opening point of the game and he doubled his and his side’s tally two minutes later when he converted a free after a foul on Jessie McGuinness.

Three further McSharry converted frees increased the Melvin Gaels lead as Cloone struggled to impose themselves on the contest.

Darragh Rooney joined McSharry on the scorer’s list when he pointed in the 14th with a fine individual effort and with Cloone struggling to get their forwards into the game Melvin Gaels further extended their advantage when David McSharry struck for his sixth and Melvin Gaels’ seventh point in the 15th minute.

Cloone badly needed a score to settle their nerves and were presented with an opportunity to open their account a minute later but unfortunately for them Gavin Reynolds was off target with his effort.

Despite that miss there were signs that Cloone were fighting their way into the contest although there was a feeling the game was already beyond them. Mark Beirne’s delivery was met by the fist of Michael Bohan but he was unable to direct his effort beyond Garret Phelan who was well positioned to claim the ball.

With 10 minutes of the half remaining Cloone were dealt a further blow when Dara Tiernan was issued with a black card and the resulting free was duly converted by David McSharry.

With six minutes of the half remaining Cloone opened their account with a Gavin Reynolds free after Damian O’Donnell was fouled by Colm McGowan for which McGowan was issued with a black card.

Peter McGowan re-established Melvin Gaels’ eight point advantage with a 26th minute point before Cloone gave a late display of their potential as an attacking force.

Donal Brennan released Derek O’Donnell who at the very least seemed destined to force Garret Phelan into action but corner-back Shane Ryan was on hand with an excellent block to ensure the shot offered no danger to the Melvin Gaels goal.

Leading 0-9 to 0-1 as the second half got underway Melvin Gaels had a sight of goal shortly after the restart but Darragh Rooney’s effort went harmlessly into the sidenetting.

Almost immediately afterwards Cloone had a sight of goal when a ball over the defence released Donal Brennan who won the race to the ball ahead of Gareth Phelan and managed to shoot through the legs of the advancing goalkeeper. Unfortunately for Cloone the shot lacked sufficient power to reach the goal and was cleared.

The second half was almost nine minutes old before the next score arrived with David McSharry converting another free. To their credit Cloone continued to persevere and they replied with a Brian Mulvey point after Gavin Reynolds’ pass.

Melvin Gaels failed to match the intensity they displayed in the opening half and Cloone struck again with a Mark Beirne point after good work from Donal Brennan.

However, any hopes that Cloone may be about to launch an incredible comeback were short lived as Melvin Gaels struck for the game’s opening goal with 12 minutes remaining.

Darragh Rooney did well to claim Liam Ryan’s dangerous delivery and he then applied a deft finish over Kieran Casey and into the net.

A Gavin Reynolds converted free and an excellent Donal Brennan point served only to add some respectability to the scoreline from a Cloone point of view and in the closing stages Melvin Gaels upped the tempo once more.

The Kinlough men finished the game with points from Declan Roper and Peter McGowan and in injury time they pounced for a second goal. Substitute Declan Clancy was on hand to apply an easy finish after good approach play involving Liam Ryan and Philip McGowan.