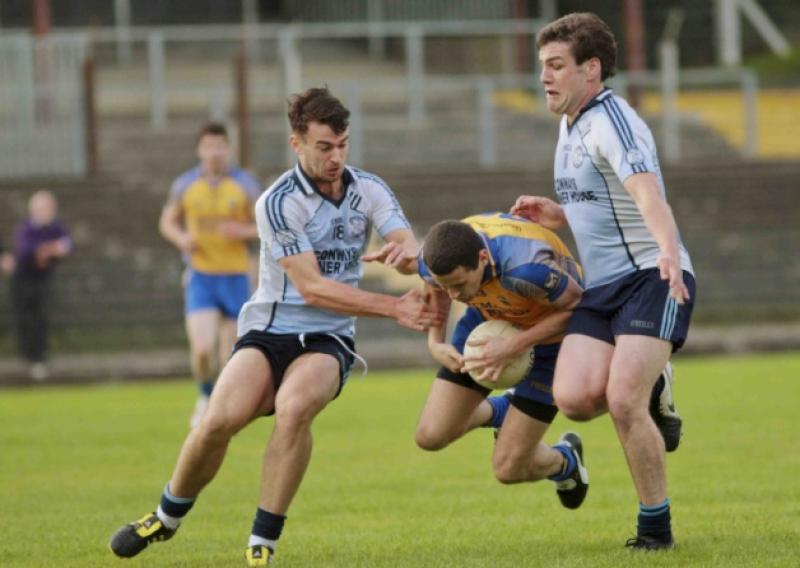 Operating with two deep lying sweepers, Allen Gaels’ objective to contain their opponents and limit their attacking threat was clear from the outset.

While they did frustrate Glencar/Manorhamilton to an extent, the game seemed to get away from Allen Gaels from early in the contest.

To give an example of the difficulties Allen Gaels were experiencing, three points were scored in the first half that began with Glencar/Manor goalkeeper Colin Gilligan.

With Allen Gaels retreating when Glencar/Manor were in possession, Gilligan always had a free man in his range and his team-mates were then able to work the ball up the pitch and into scorable positions.

While it was a comfortable victory for Glencar/Manor, they will know there remains room for improvement. Had they been more clinical they would have scored at least one goal and that is something they will be seeking to put right ahead of the semi-final.

While the intensity was gone from the game as it approached its inevitable conclusion, there was a competitive beginning to the contest.

Conor Dolan’s second minute point was cancelled out by Allen Gaels Martin Beirne with a fine shot from just outside the 45.

Allen Gaels managed to keep matters tight in the early stages before Ronan Flynn re-established the Glencar/Manor lead after a foul on James Rooney in the seventh minute.

Three minutes later Glencar/Manor gave an illustration of how effective they can be as an counter-attacking force.

Colin Gilligan began the move which also featured contributions from Paddy Maguire and Darren Sweeney and the move was completed with a score from James Glancy who starred in midfield.

Allen Gaels hit back with a point from their best performer, Brian Mulvey. Only for a fine save from Gilligan the Drumshanbo men would have been celebrating a goal.

With five minutes of the half remaining the deficit was reduced when James Flynn pointed after Mulvey’s quick free but it was Glencar/Manor who completed the first half scoring when Conor Dolan converted a free to lead 0-8 to 0-3 at the interval.

Three points within eight minutes of the restart from Niall Brady, Evan Sweeney and Ronan Flynn (free) put Glencar/Manor back in complete control and from then on they never looked in real danger.

Brian Mulvey scored his side’s first point of the second half after Martin Rafferty’s pass but that was immediately cancelled out by another Adrian Croal point.

Mulvey converted a free as Allen Gaels enjoyed plenty of possession but they struggled to turn that into scores against a well-drilled defence and Glencar/Manor extended their lead to eight points when Evan Sweeney pointed with 10 minutes remaining.

James Flynn replied with an Allen Gaels point but the contest was put beyond doubt with scores in quick succession from James Glancy, Killian McGrisken, Adrian Croal and Evan Sweeney.

Brian Mulvey completed the scoring with a late Allen Gaels free but Glencar/Manor were already sure of victory.