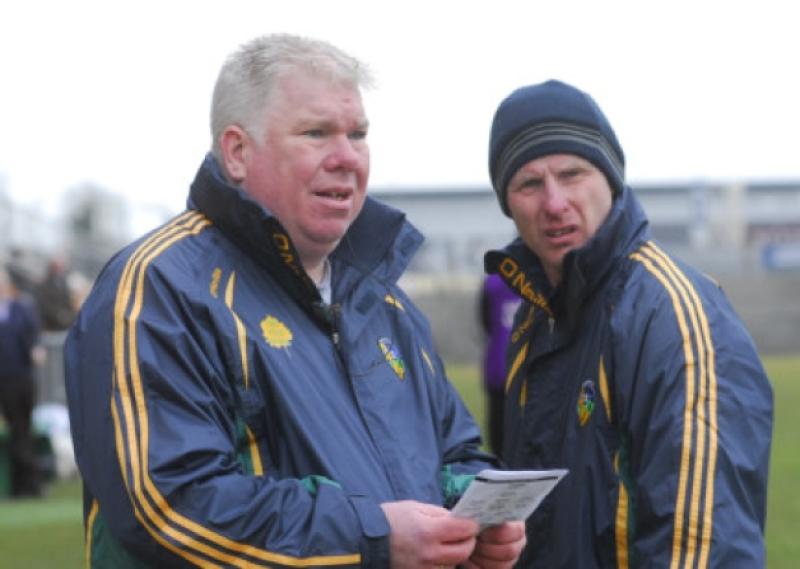 It wasn’t a performance to inspire great confidence and joint manager George Dugdale was the first to admit Leitrim struggled in their final Allianz League Division Four clash with London last Sunday.

It wasn’t a performance to inspire great confidence and joint manager George Dugdale was the first to admit Leitrim struggled in their final Allianz League Division Four clash with London last Sunday.

“We scrambled over the line,” George admitted, “we struggled for long periods and then we got a period of dominance in the second half when we went four up. The London shot that came off the crossbar was the turning point, we went up the far end and got the goal that gave us a four point cushion.

“We didn’t kick on from there, we let them back into it, we have got to start killing teams off. First half, no great intensity, way off the pace, second half, there was a bit of an improvement but there needs to be a huge improvement again, to step up it for New York because that performance wouldn’t be good enough.

“Today our defence was opened up again which is worrying and things we are working hard on in training is not showing itself in matches yet and all you can do is keep working hard on things you are not doing that well and hopefully, it will come right in the end.”

George didn’t accept that the lacklustre display was caused by the fact that Sunday’s game with London had nothing at stake and that motivation may have been a problem – “It shouldn’t be because we should have competition for places and fellows are the start of our championship campaign.

“This is the first in a series of matches we have planned for the championship. We were using this as a championship opener and fellows have places to win so there should be no motivational factors necessary if they want to be part of the first 15 in New York. I don’t think motivation was an issue.”

Looking back over the entire League campaign, George felt that Leitrim had left the chance of promotion behind them – “I’m very disappointed, other than the Tipperary match where we were well beaten, the other three games I would prefer to say we lost rather than we were beaten.

“There were some very good points, some very good passages of play, some very good performances, what we have to try and achieve is consistency over 70 minutes but we were seven up here against Clare, we were one up against Offaly with a strong wind and didn’t kick on and down in Limerick the first day, even playing badly, we got back to within one with ten to go and never kicked on either.

“That is where the League was lost, against Limerick and Offaly and Clare, not particularly against Tipperary because if we had won them other three, we would have had that cushion.”

As for New York, George promises that Leitrim will take nothing for granted ahead of the trip to Gaelic Park – “We have to make sure that we have our house in order, that we plan properly. We’re taking nothing for granted. We need to go in a professional manner, do the job and get a result, that is what we have to focus on.

“They’re probably a big physical team who will throw everything at us, we have to make sure that we can play at a slightly higher pace as obviously they won’t have had much match practice and we need to use that to our advantage.

“We have plans in place, we know what lies ahead for us, we’re going to work hard and see where that takes us, hopefully we can go to New York and do the job.”