Mulligan carries Leitrim across the line 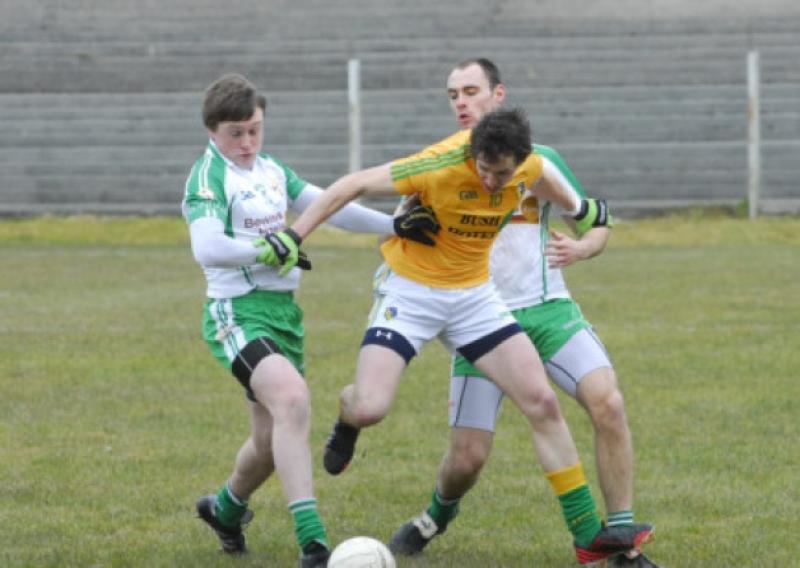 An Allianz League Division Four campaign that started with the promise of greater things ended last Sunday in much the same fashion as the entire campaign transpired, with Leitrim turning in a baffling mix of the good and the bad as the Green & Gold were somewhat lucky to get the better of an improving and impressive London side in Pairc Sean Mac Diarmada.

An Allianz League Division Four campaign that started with the promise of greater things ended last Sunday in much the same fashion as the entire campaign transpired, with Leitrim turning in a baffling mix of the good and the bad as the Green & Gold were somewhat lucky to get the better of an improving and impressive London side in Pairc Sean Mac Diarmada.

The match turned decisively in Leitrim’s favour 13 minutes from full-time when London’s Ciaran McCallion crashed a shot off the Leitrim cross-bar. A desperate Leitrim cleared their lines, worked the ball up the field where Conor Beirne expertly finished a great shot to the net.

The goal ultimately proved the difference in a tight contest where an emerging and physically powerful London put Leitrim to their pin of their collars to emerge with the win, indeed, it was London who were chasing a late goal as Leitrim were growing increasingly desperate in injury time.

Conor Beirne’s goal proved crucial but the real match-winner was the imperious Emlyn Mulligan whose return of five points fails to show just how much influence he had on this contest. When the pressure was on, Mulligan was the man his team-mates looked to and their captain delivered in style.

Two brilliant points from play after London had taken a two point lead early in the second half typified Mulligan’s display and it was definitely needed as a Leitrim team who looked as if they had one eye already firmly fixed on New York delivered their most lackadaisical display of the League campaign.

Perhaps it is understandable that Leitrim weren’t firing on all cylinders – with nothing to play for last Sunday, the focus is very definitely on the championship, now just four weeks away, but the paltry few fans who turned out last Sunday to Pairc Sean will have been worried by Leitrim’s erratic form.

The championship will bring greater intensity and focus but the optimism that rose so sharply thanks to Leitrim’s FBD League triumph has been slowly eroded and leaves Leitrim more than a shade anxious when they make the long journey across the Atlantic to face New York in Gaelic Park.

What Brian Breen and George Dugdale will be most anxious to deliver is a consistent performance as all of Leitrim’s displays in the League have mixed periods of wonderful football with equally frequent bouts of haphazard and nervous football.

The truth was that this year’s Division 4 was much more competitive than ever before and Tipperary, who demolished Leitrim in the previous round, were themselves denied promotion by an equally impressive Offaly, emphasising just how difficult it will be to escape the Division next year, particularly when Wicklow and Antrim come back down.

Mulligan was the star performer while Robbie Lowe, Cian Reynolds and Conor Beirne did their hopes of a championship start no harm at all, Lowe in particular very effective in the unfamiliar full-forward line. But James Glancy’s injury is a worry and hopefully not too serious, initial reports suggesting that the Manor man sustained severe bruising.

Leitrim started well with Robbie Lowe curling over a fine point on three minutes but Leitrim were rocked back when a poor Leitrim pass was intercepted and two passes later, Padraig McGoldrick set up Lorcan Mulvey whose low finish expertly found the far corner of the net on six minutes.

Two Emlyn Mulligan frees, both for fouls on James Glancy, levelled the scores within six minutes but there was a real let-off when Mark Gottsche blasted wide when clear through on goal a minute later.

Leitrim went straight down the field and James Glancy battled well to curl a lovely shot over the London bar to edge Leitrim back in front. Cathal Magee converted a free but Leitrim suffered a blow when Glancy injured his knee badly in an accidental collision and was forced out of the action, Conor Beirne replacing the full-forward.

Beirne had an immediate impact, playing a one-two with his brother Tomas as the elder Beirne scored a nice point. London hit back with two Padraig McGoldrick frees before Robbie Lowe got a second fabulous point to tie the scores.

Seamus Hannon fisted over when a goal was on the cards in a real let-off but a fabulous Cian Reynolds point, curling a long range shot from the right wing over the bar, left the halftime score at 0-7 to 1-4.

But it was now that Mulligan really stamped his class on the game, scoring two lovely points from play, the second set up by a great move from Brendan Flynn’s kick-out to Cian Reynolds in space. Mulligan then added a free as the game hung in the balance.

Both sides missed chances before the game’s crucial minute when Ciaran McCallion burst past the Leitrim cover and launched what seemed like an unstoppable shot at the Leitrim goal, only for the bar to intervene.

With London momentarily stunned , Leitrim struck at lightning pace, working the ball straight down the field where Conor Beirne rounded a defender and the keeper to slide the ball to the London net for a crucial score.

Two minutes later, Ray Cox was introduced and barely seconds on the field, the Annaduff man swept the ball over the bar. That score came with ten minutes to go and it was Leitrim’s last of the game as London’s Lorcan Mulvey took over completely.

Two lovely points from play increased the pressure and it took a good save from Brendan Flynn to deny the Cavan native a second goal with seven minutes to go. A last minute Mulvey free left London chasing a late goal and they seemed to be working their way through the Leitrim defence only for Wayne McKeon to make a vital interception to see the game out.