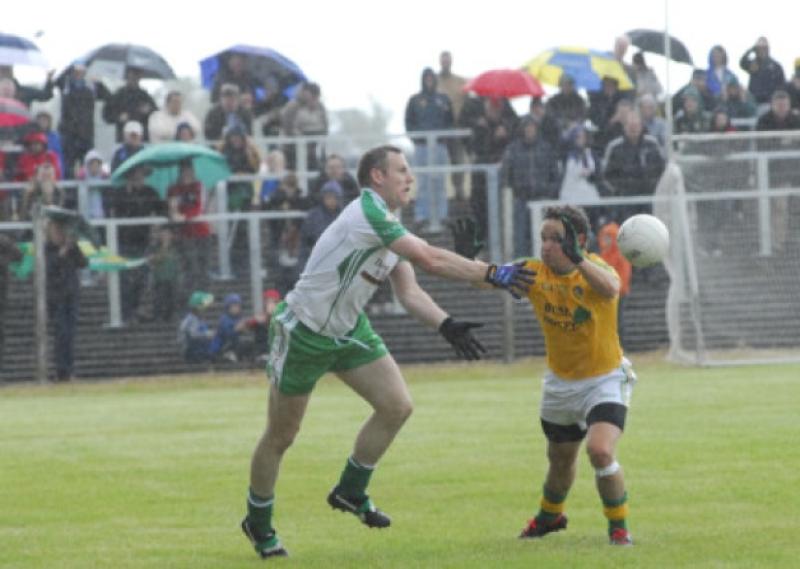 The drama that preceded Sunday’s Connacht Championship Semi-Final may have had plenty of people talking over the last few weeks but it was completely and utterly exceeded in Pairc Sean Mac Diarmada as Leitrim rescued a draw in a thrilling encounter.

The drama that preceded Sunday’s Connacht Championship Semi-Final may have had plenty of people talking over the last few weeks but it was completely and utterly exceeded in Pairc Sean Mac Diarmada as Leitrim rescued a draw in a thrilling encounter.

Two points in the closing minutes from Man of the Match Darren Sweeney and Kevin Conlan saw the Green & Gold grab a deserved draw in an exciting and thrilling game that served up all the best aspects of championship football - full blooded commitment, hard but fair challenges and action aplenty at either end.

Leitrim twice looked as if they were about to take a grip on the game and book a place in the Connacht Final against Mayo but twice they were pegged back by London goals, goals that probably should have been avoided.

Yet London also missed two gilt edged goal chances that would have consigned Leitrim’s championship campaign to dust so it was two very relieved teams at the final whistle.

Leitrim had the chance to win it in the dying seconds of added time from a fifty but Ciaran Egan’s effort flew well wide, ensuring the sides must meet again next Sunday, July 30, in Hyde Park Roscommon with a 3.40 pm throw-in.

The loss of four players to disciplinary reason and injuries to Paddy Maguire and Gerry Hickey was compounded when captain and chief scorer Emlyn Mulligan was forced from the action at the midway point of the first half but London were similarly hit when their free-taker Mark Gottsche was also forced from the action with injury.

Leitrim players and supporters were up in arms over the failure of Derry referee Barry Cassidy to award a penalty after a foul on James Glancy in the first half, something that looked a clear cut position but the Derry man let the game flow, applying the advantage rule on three separate occasions that led directly to Leitrim points while an obvious double-hop from Paul Brennan in the move that led to the equalising point was also missed by the match official.

Credit must go to both teams - London looked dead and buried twice but forced their way back and for a Leitrim team under siege as much from a section of their own supporters, the resolve and character they showed in fighting back from a two point deficit with four minutes left on the clock speaks of a united team, not one riven by disharmony or dissent.

The replay now takes on a life of its own - Hyde Park has always been a happy hunting ground for Leitrim but London were equally grounded after the final whistle and the match promises to be just as tightly fought. Match practice has always been the achilles heel of the Exiles but Sunday’s encounter will bring them on leaps and bounds.

Paddy McGowan got Leitrim off to a good start with a long range point that bounced over the crossbar but Seamus Hannon charged out of the London defence to reply. Darren Sweeney and Padraig McGoldrick swap points in a hectic opening five minutes.

London go in front when Lorcan Mulvey holds off both Ciaran Egan and Paul Brennan to fire over but a Mulligan free levels the scores. Unfortunately, that is the Leitrim captain’s last act in the game, an injury forcing him from the game with Cian Reynolds making his championship debut as a sub.

London’s Mark Gottsche converts a 60 yard free to put London ahead but Leitrim hit a superb spell with three points in two minutes - James Glancy firing over after he looked to be clearly fouled in the square, Brendan Brennan finishing off a great move and McGowan getting another lovely point from the right wing.

London missed a few chances and also suffer a blow when Gottsche is forced off, former Galway star Paul Geraghty coming on. Both teams miss chances but the game takes a dramatic turn less than two minutes before the break when Padraig McGoldrick sends a high ball in to goal.

Cathal McCrann seems to have it covered but the ball slips from his grasp and hits an inrushing Lorcan Mulvey who bundles the ball to the net, leaving the halftime score at 1-4 to 0-6 for London.

The second half was just as dramatic - Kevin Conlan levelling the scores as he curled a free brilliantly over the bar but there was an escape at the other end when Cathal McCrann made a great save to deny Geraghty a certain goal when he was clean through.

London keeper Declan Traynor converted the resulting fifty but a surge through the middle and one-two with Enda Williams saw Paul Brennan fire over another equaliser.

Leitrim started to take control but the misses were more frequent than the scores as it took Leitrim ten minutes to open a two point lead thanks to scores from Robbie Lowe and Brendan Brennan - unfortunately, there were also four wides during that period.

James Glancy was again at the centre of an appeal when he was barged off a long ball from Robbie Lowe but the excitement level when through the roof when sub Sean Kelly somehow wriggled past two defenders on the Leitrim end-line and smashed a shot past Cathal McCrann for a devastating goal.

Seconds later, it should have been a third goal as London cut through the Leitrim rearguard with sub Eoin O’Neill completely unmarked but Cathal McCrann advanced smartly to smoother the shot and repel the danger.

Kevin Conlan levelled from a free but Sean Kelly got a brilliant score from the wing with eight minutes to go and when Cathal Magee put London two up with less than four minutes left, it looked all over bar the shouting.

But Leitrim immediately hit back - Darren Sweeney may have been attempting a fisted pass across goal to unmarked duo James Glancy and Adrian Croal but the gapp went over the bar and then a layoff from Croal put Kevin Conlan through for the equalising score.

The drama wasn’t over yet - Dean O’Neill saw a late shot drop short while Darren Sweeney’s effort was batted out for a fifty.

With the two minutes of added time elapsed, the drama got even higher - an injured Conlan was due to be replaced but tried to stay on to take the free, referee Cassidy ensuring he went off before Ciaran Egan’s kick flew well wide, ensuring another day out next Sunday in Hyde Park.

For more on Sunday’s game, see this week’s Leitrim Observer and wwww.leitrimobserver.ie