Shock of the year as Mohill stun Manor 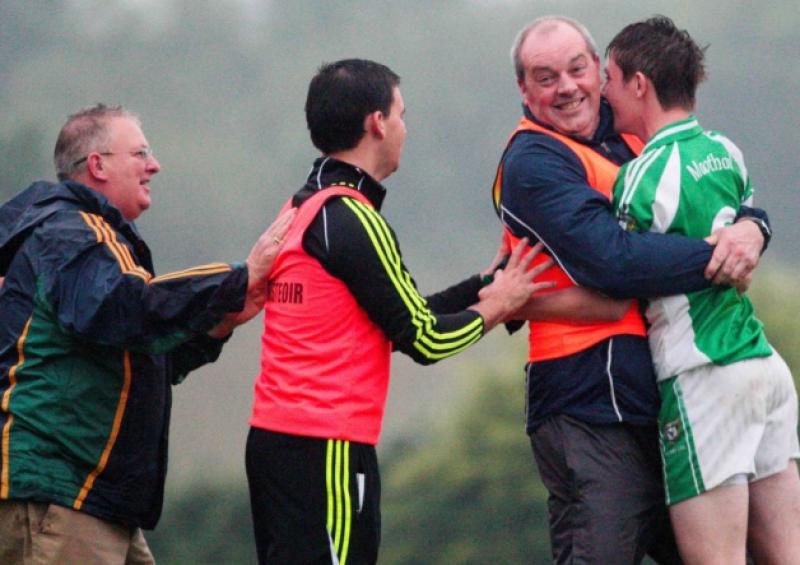 The race for the Fenagh Cup took an unexpected turn last Saturday when Mohill dumped Glencar/Manorhamilton out of the competition.

The race for the Fenagh Cup took an unexpected turn last Saturday when Mohill dumped Glencar/Manorhamilton out of the competition.

For the first time since 2007, Glencar/Manorhamilton won’t appear in the Senior Championship decider as a Ronan Kennedy goal late on in an epic encounter gave Mohill a victory that few predicted.

Few imagined that Ballinamore Sean O’Heslin’s would lose to Glencar/Manorhamilton just a week previously but last Saturday in Shane McGettigan Park, it was the turn of the north Leitrim men to suffer an unexpected and devastating championship defeat.

Mohill, who last won the title back in 2006, took the victory when former county panelist Ronan Kennedy got the goal after a late goal mouth scramble while the four-in-a-row champions will rue a catalogue of wides and the dismissal of County star Gerry Hickey for two yellow cards.

Glencar/Manorhamilton’s defeat will have the remaining teams dreaming of victory but reigning champions Melvin Gaels showed the true mettle of champions as they rescued a deserved draw against a high flying St. Mary’s Kiltoghert in the first of last Saturday’s games in Drumshanbo.

The champions got off to a great start as they led by five points and saw the Carrick men miss a penalty and waste another golden goal opportunity but it was the Kinlough men who had to dig deep to rescue a draw, county star Paul Brennan scoring from distance to force a draw.

Carrigallen will meet the winners of the St. Mary’s and Melvin Gaels replay after they disposed of Allen Gaels somewhat more comfortably than the 0-9 to 0-8 scoreline suggests, recovering from a five point deficit early in the first half to claim the victory.

Last year’s Intermediate champions Gortletteragh are on track to emulate their predecessors Melvin Gaels as they also reached the semi-final following a hard fought 0-7 to 0-5 win over Annaduff, Cathal McCrann again starring on a night not suitable for good football.

Glenfarne/Kiltyclogher, under the leadership of County Senior team manager nominee Martin McHugh, also defied expectations as they snatched a dramatic 1-13 to 1-12 victory over Drumkeerin, the crucial goal coming with less than two minutes of normal play left on the clock.

Glenfarne/Kilty face Glencar/Manor next weekend in the Intermediate Semi-Finals with St. Patrick’s Dromahair taking on Eslin.