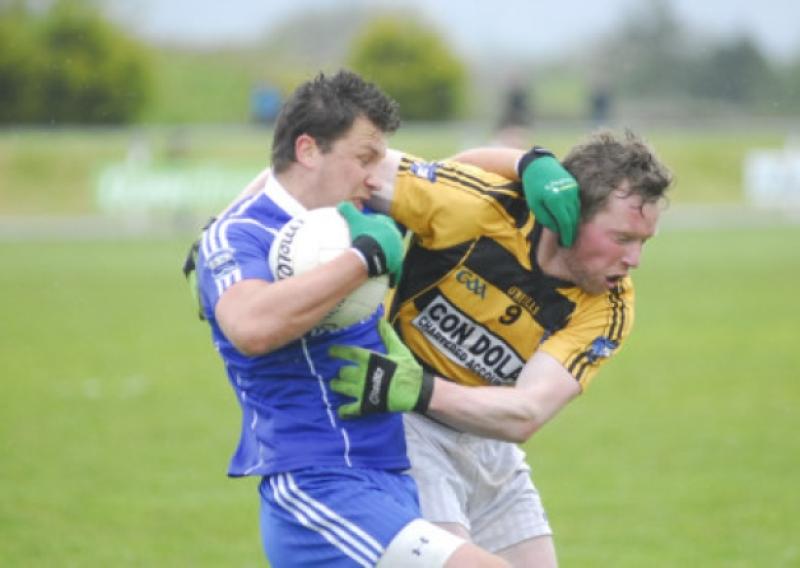 Defending Senior county champions Melvin Gaels began the defence of the Fenagh Cup in Shane McGettigan Park, Drumshanbo on Saturday evening last and did just enough to merit a hard earned win over a Carrigallen team who appear to be considerably better than they were in last year’s championship.

Defending Senior county champions Melvin Gaels began the defence of the Fenagh Cup in Shane McGettigan Park, Drumshanbo on Saturday evening last and did just enough to merit a hard earned win over a Carrigallen team who appear to be considerably better than they were in last year’s championship.

The game began with Melvin Gaels starting the better but as the half progressed Carrigallen grew in confidence and with Gary Reynolds having a big impact in midfield the defending champions were tested thoroughly.

The loss of Emlyn Mulligan was felt in the opening stages by the Kinlough men when a Conor Sheridan freee flew harmlessly wide but that was soon forgotten as the same player made amends from another free to open the scoring in the seventh minute.

That lead wasn’t to last long as Carrigallen hit back immediately with Benny O’Rourke pointing after good play from Andrew McManus.

Having survived a let off when Ger Percival’s goal chance went wide, Melvin Gaels regained the lead with a fine Conor Sheridan point and moments later the Gaels were awarded a penalty after Paul Brennan was fouled.

That goal seemed to have a greater effect on Carrigallen than it did their opponents and for the remainder of the half Carrigallen were unquestionably the better team. The strong tackling, sharp passing and clever movement of the Carrigallen players was not matched by their shooting.

What would have been frustrating for the Carrigallen supporters was that they were unable to fully utilise the full-forward line as the delivery was regularly too slow, allowing Melvin Gaels defenders to clear the danger.

Two points from Benny O’Rourke (one free) meant there was just two points separating the sides approaching the interval and in the closing stages Liam O’Rourke and Ger Percival both pointed meaning the sides were level at 1-2 to 0-5 as the whistle sounded to end the first half.

Half-time would have been welcomed more by the Melvin Gaels players who looked much stronger when the second half got underway and points from Paul Brennan and Peter McGowan, within five minutes of the restart, gave Melvin Gaels a little breathing room before it got significantly better for the defending champions.

Blaine Mulligan and Peter McGowan combined well to create a goal scoring opportunity for Stephen McGurrin who was denied by an excellent save from Enda Lyons.

Unfortunately for Carrigallen the rebound couldn’t have fallen kinder for McGurrin who made no mistake at the second time of asking.

Although the lead was now more comfortable for Melvin Gaels there was no suggestion of Carrigallen throwing in the towel and they replied with two excellent pointed frees from Gary Reynolds, both of which were more than 45 metres from goal.

A third such effort from Reynolds appeared as though it would go over the bar and reduce Melvin Gael’s lead to two points but it crashed off the bar before being cleared.

Defences dominated the final quarter of the game with Melvin Gaels’ Fabian McMorrow looking particularly sharp as the Gaels always appeared to be able to keep their opponents at arms length and but for wayward shooting would have in fact extended that lead.

With four minutes of the game remaining Carrigallen reduced the deficit to two points with an Eamonn O’Malley point and the Melvin Gaels players may have been regretting some of their missed opportunities during the second half.

Ultimately those misses were not to prove costly as Damian Sheridan scored the final point of the evening to ensure a three point win for Melvin Gaels and a winning start to their defence of the Fenagh Cup.