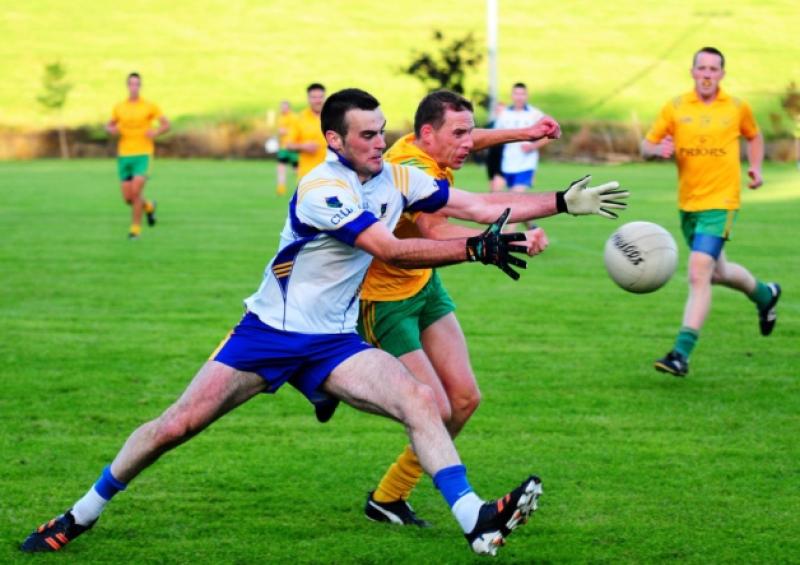 Sean O’Heslin’s had to withstand dogged resistance from Cloone before emerging winners in this clash in Carrigallen on Saturday evening last.

Sean O’Heslin’s had to withstand dogged resistance from Cloone before emerging winners in this clash in Carrigallen on Saturday evening last.

The Ballinamore men have been overwhelming favourites for the Intermediate Championship title since they were relegated last year and injuries to key Dromahair players only served to increase the burden of favouritism.

But they got a stern examination last Saturday evening froma Cloone team who were desperately unlucky not to defeat Eslin just a week previously when the scoring feats of Conor Beirne and their own profligacy in front of the posts cost them very dearly.

As was the case the week before Shane Moran was in fine form for Sean O Heslins and put his team ahead after a minute. Cloone’s Mark Creegan got a fine point from play to put the teams level but Ronan O Rourke responded quickly with a point.

Cloone’s Damian O Donnell put a free wide before Luke Murphy extended Sean O Heslins lead. This was followed by further points by Sean Murray and Shane Moran which left the score 0-5 to 0-1 in favour of the Ballinamore men. A

The second half started with a number of wides before David Duignan again pointed. Bad shooting was affecting both teams before Mark Creegan received his second point and Cloone’s fifth of the match. Sean O Heslin’s upped their game and went 7 ahead with two points by Shane Moran and a pointed 45 by goalkeeper Paul Prior.

Cloone sub Mel Clancy banged in a goal for his side after 25 minutes followed by an O’Donnell free as the pressure was ramped up on the Ballinamore men.

Suddenly there was only three points between the teams. Sean O Heslin’s steadied the ship again and their centre back pointed which meant they ran out unconvincing 4 point winners.

The men from Ballinamore may not be the overwhelming favourites for Intermediate glory anymore as most fans seemed to think and it may serve a timely warning to them in the long run, something that manager Mickey Graham may actually welcome.