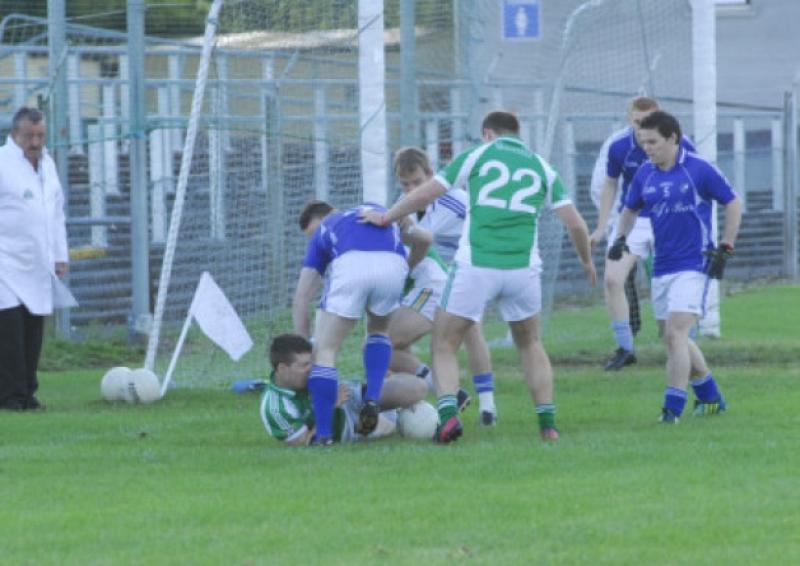 Low scoring and tense it may have been but Mohill’s victory over Carrigallen came after a hard fought and entertaining encouner.

Low scoring and tense it may have been but Mohill’s victory over Carrigallen came after a hard fought and entertaining encouner.

Defences were very much on top in this encounter and Carrigallen started off strongly but couldn’t match the fitness of a young Mohill side who will be very pleased to have come through a searching test.

The game was played at a hectic pace and even if the scores were not that frequent, some excellent defending on both sides made this an open and entertaining encounter.

After the teams swapped points, Liam O’Rourke put Carrigallen in the driving seat with a neat finish to the net on nine minutes and the Carrigallen men continued to dominate for the rest of the half.

Mohill came back with points from John Mulligan, Colm Beirne and Ronan Gallagher but scores from Gerard Percival and Benny O’Rourke gave Carrigallen a deserved 1-3 to 0-4 halftime lead.

The tit for tat continued early in the second half with points for Mulligan and Kevin Davey but Carrigallen missed some crucial chances to extend their lead with a Colm Beirne point closing the gap.

With the hectic pace beginning to tell on both teams, Shane Quinn scored a huge point from the wing to level the scores and seconds later, Donal Flynn finished off a good move with a fine goal.

Percival saw a shot come off the woodwork but Alan McLoughlin scored a massive long range point to stretch the lead to two points. J.P. McManus should have goaled but a small shove put him off and his shot clipped the crossbar on the way over with five minutes to go.

Both sides missed chances, Carrigallen the more guilty and sub Oisin Madden sealed the victory with a point in added time.